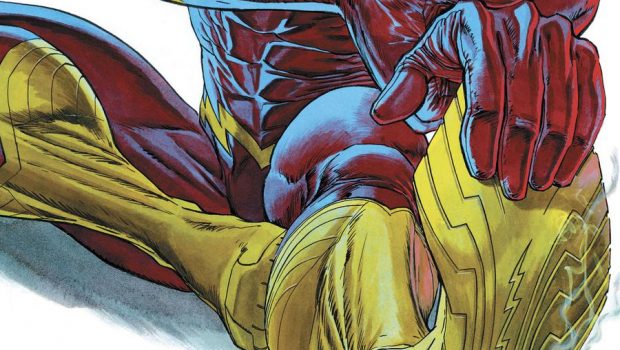 Summary: Hunter Solomon is given a reason to live. Death gets defeated and the kids are in DEEP trouble.

The Story: A revelation of Zoom is made and a sacrifice is demanded to win the day.

Background: This issue finally (at least I think) ended the 20 year story of Hunter Zolomon AKA Zoom. Seeing Thawne screw with the timeline even more just to set up everything like a giant chess board is very interesting. It’s like he’s been retroactively placed inside a massive web and has taken it over. Apparently, everything since Hunter first showed up 20 years ago has been one giant game for Thawne.

Summary: Hunter had been right. He had always been right. The clown that killed his father in-law never had a gun. Thawne went back in time to give the clown a gun just so Zolomon could become Zoom.

I’m actually OK with this. Unlike Tom King’s ass-pull, this is a writer who took a piece of lore and instead of altering it, he added to it. He gave Zoom a new reason for existence. It’s a sad piece of existence mind you, but still a fresh one. Barry is still hurt from attacking the Black-Flash and they race away.

Meanwhile Avery and Wallace are still deciding what to do with the Rogues they found. They are attacked by Golden Glider and …

Were back to Barry and Zoom. Zoom realizes he’s the only hope to close the force barrier. He sacrifices himself, all while asking Barry to tell Wally he’s sorry. The Black Flash is royally pissed off that Zoom’s gone and…

We’re back to the Rogues and the two young speedsters as we see Barry try and leave the Black Flash behind the force barrier. He succeeds, but this royally screws with the speed force and the young speedster’s powers cut out. The power (literally) comes back on the sky darkens. Steadfast sees Perpetua is helped into the Flash Museum by Iris. The kids are blasted through the wall as the Rogue’s are now in total control as the sign of Doom hangs in the sky.

Final call: This issue gave us a nice bow on top of the final Zoom package and FINALLY CONCLUDES the “force powers” storyline. It went on for WAY too long, but the story has made sudden leaps and bounds ahead. I’m excited for the Flash once again.