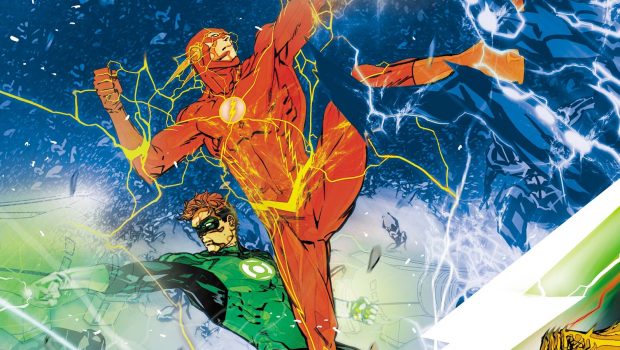 Summary: Not reinventing the wheel. Simply having fun with it.

After feeling disappointed about the lacklustre start to The Colour of Fear storyline, I’m happy to report that Flash #24 is an improvement. It’s still not as interesting as The Button but when the restaurant is closed you’ll settle for a good takeout. This is a much-needed step up to push the story forward. Not only did it provide a good faceoff between characters. Flash 24 also provided some much-needed character development as well as some light moments of humour. Basically, everything you would expect from a Flash comic. Which is never a bad thing to fans of the Flash.

For those of awaiting season 4 of the TV series the comics are always a good way of dealing with Flash withdrawal symptoms. Going cold turkey on Flash sucks but the comics more often than not hit the spot. The narrative is pretty much split into separate events that are happening simultaneously. One strand follows up the battle between Kid Flash and Reverse Flash. Picking up straight from the cliff hanger of Flash 23. The second strand involves a bit of bonding between Green Lantern and The Flash. All whilst figuring out how to defeat Multiplex. Also Rverse Flash’s costume by choice of colour automatically puts him at odds with the Green Lantern.

Reverse Flash revels in being an utter bastard as always. Toying with his victims. Toying with their bodies and toying with their emotions and their minds. It’s what makes Reverse Flash such an interesting counterpoint to Barry Allen’s heroic Flash. Both have the same powers yet one chooses to do good and one chooses to revel in sadism. Willamson succeeds in making Reverse Flash more loathsome than he already is. Which is quite the achievement given the amount of Flash V Reverse Flash stories over the years. Giadomenico’s art work fits the tone of the story quite well, though the rendering of character’s emotions in close up panels could be a bit better. However, most of the time his artwork hits the spot, and the colours add vibrancy to the images.

Flash 24 may not tread new ground, or add to The Flash mythos in any meaningful way. None the less, Flash 24 is a fun and diverting read. Providing some development between the characters and a good old-fashioned hero V villain showdown.