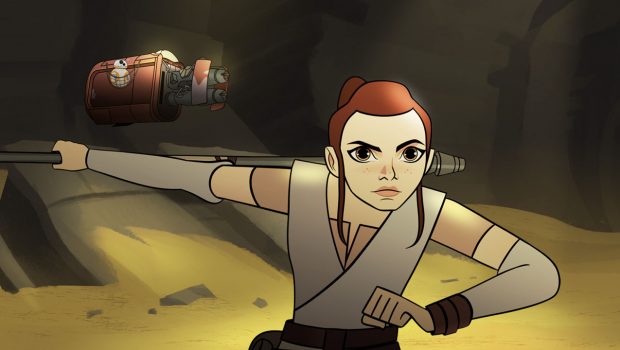 Disney has released the first animated short film in the new Star Wars: Forces of Destiny series, entitled Sands of Jakku. It focuses on the female characters of the Star Wars universe and will have a total of 16 episode. Kathleen Kennedy, Co-Chairman of The Board and President of Lucasfilm, described the series as the following;

Star Wars: Forces of Destiny is for anyone who has been inspired by Leia’s heroism, Rey’s courage, or Ahsoka’s tenacity….We’re thrilled that so many of the original actors are reprising their roles in these shorts which capture the small moments and everyday decisions that shape who these characters are. It is a fun new way for people to experience Star Wars.

Sands of Jakku take place during the events of Star Wars: Episode VII, just after Rey’s rescue of BB-8, but before she arrives back at Niima Outpost. And features a cross between a Dune sandworm and a Tremors Graboid.

Stay tuned as the next episode should be releasing tomorrow on the 4th of July. Other shorts will star Jyn Erso (voiced by Felicity Jones), Ahsoka Tano (Ashley Eckstein), and Princess Leia (America Horror Story‘s Shelby Young).