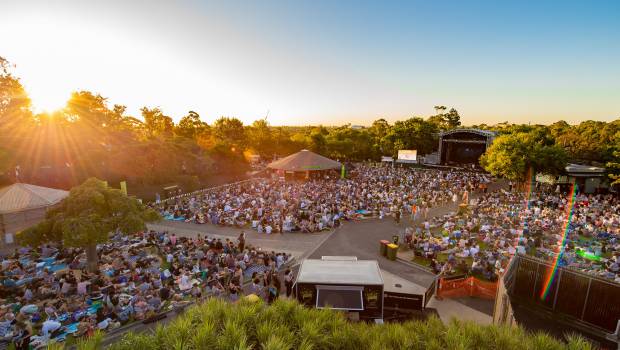 Fans came out in their masses to watch the incredible Julia Jacklin and Meg Mac for the penultimate weekend of the iconic summer concert series. In what is sure to be a fitting end to an extraordinary six weeks, two incredible international acts will set the stage alight this weekend.

This Friday, after a decade-long hiatus, UK art pop pioneers Stereolab will make a much-anticipated return to the stage, delivering Melbourne fans the same lush, layered sounds that established them as one of the ’90s most influential indie acts. Driven by the hypnotic vocal melodies of French frontwoman Laetitia Sadier and the sonic experimentation of Brit Timothy Gane, the band broke the mould of what alternative rock could be in the navel-gazing grunge era. The cosmic funk of Mildlife will set the scene for Stereolab, showcasing the psych, funk and jazz blend that’s seen the improvisational prodigies sell out shows around the country.

The following night, a true living legend, US gospel, soul and R&B queen Mavis Staples will grace the stage. An alchemist of American music, the unstoppable performer has collaborated with the likes of Prince, Bob Dylan, Ben Harper and Arcade Fire, released over a dozen albums and been inducted into both the Blues Hall of Fame and Rock and Roll Hall of Fame. The once-in-a-generation artist will share her musical legacy as the sun sets over Zoo Twilights, with masterful support by one of the most inspiring voices in Australian soul, Emma Donovan, who will perform with her band The Putbacks.

This year, the genre-spanning program has seen a diverse range of performances including timeless chart-topping icons, ICEHOUSE; nine-time Aria award-winning Australian pop royal, Missy Higgins; Perth art-rockers Methyl Ethel; eternal summer favourites The Cat Empire – plus many more. All proceeds from these shows go towards efforts to protect the critically endangered Mountain Pygmy-possum and The Bushfire Emergency Wildlife Fund which is supporting the wildlife affected by the fires.