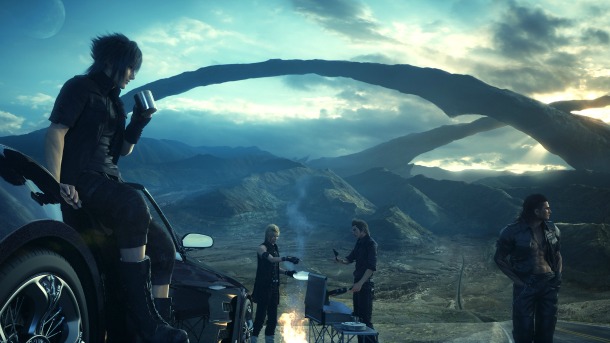 To recap on all of the information shared during the TGS Active Time Report, the latest ATR Snapshot can be viewed at: https://youtu.be/rQK7wapSzWQ. Players looking for additional information about FINAL FANTASY XV can tune into the next ATR set to take place at the end of the year, which will reveal further details around the powerful and menacing Empire of Niflheim.

During the ATR, FINAL FANTASY TYPE-0 ONLINE for mobile devices (iOS, Android, Windows Phone) and Windows PC was also announced. Revisiting the familiar world of Orience, the game is set in a parallel world to FINAL FANTASY TYPE-0 – and will feature multiplayer online, action-RPG gameplay. The game is currently in development and is scheduled to launch in Japan in 2016. The title’s availability for Western markets is currently under consideration.

Details on the Lore of FINAL FANTASY XV

In the Kingdom of Lucis, King Regis has maintained a protective barrier around the crown city by channeling the magical energy of the crystal, but the strain has taken a toll on his body. Aged and weakened, with the imperial might of Niflheim at his doorstep and his wall on the verge of collapse, the king finds himself, his beloved son, and his kingdom defenseless.

Meanwhile, in Tenebrae, Luna’s sacred status as Oracle has elicited a degree of autonomy for the former kingdom, but she must still stand firm in the face of the imperial occupation. By her side stands the mysterious, black-haired Gentiana.