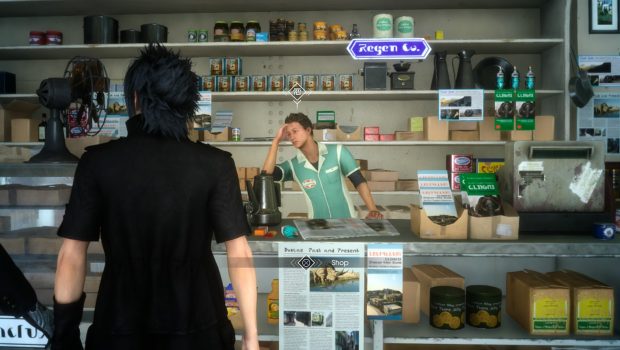 After a short wait, I had some time with the latest demo version of Final Fantasy XV. Like the Episode Duscae demo, this one also starts with car troubles. I am somewhat concerned that Noctis and friends will spend a lot of time performing menial labour in exchange for car repairs; hopefully this premise is just being used for the demos. But this hasn’t put a dampener on my levels of anticipation for the longest awaited fantasy roadtrip game ever.

One of the first things I noticed upon starting the demo—after the fact it was in Japanese and had no subtitles—was the idle animations of the characters. Noctis and friends don’t stand around awkwardly, and they certainly don’t all follow each other single-file. Having been replaying Final Fantasy VIII recently, where party members follow the exact path of the party leader, this is a really authentic-looking experience.

And I think that’s what I’m most excited about: that Final Fantasy XV’s world seems more lively and fully-realised than any of the previous games, and many of its contemporaries. Something so innocuous as parked cars shouldn’t be so dramatic an inclusion, but Final Fantasy has had plenty of only-boat-in-the-entire-world scenarios over the years, so it stands in stark contrast. NPCs wander around the settlement areas; and sure, they’re not amazingly distinct and their animation and pathfinding is still a little janky at the moment, but these characters populate the world and make it seem like an actual place rather than a collection of stereotypical locations stitched together with magic.

The new area was quite nice to explore as well, even if it was smaller than Episode Duscae showcased. The existence of gas stations, parking lots, and general civilisation outside of hubs moves Final Fantasy XV from pure fantasy into magical realism territory. It will be interesting to see how this world is presented to the player in the game. At the moment, ‘freedom’ is forced upon the player by virtue of broken down cars; go explore because you arbitrarily cannot progress. If this set-up continues, it might feel really limiting; but the opposite, allowing full freedom, might not incentivise exploring enough. I am curious to see how this balance is achieved.

The other thing of particular note is how amazing all the food looks. I can only assume the team at Square Enix had a chef prepare all these delicious meals as a reference, so I am jealous of whoever got to eat them. My fervent hope is that Square Enix includes a cookbook with a Collector’s Edition.