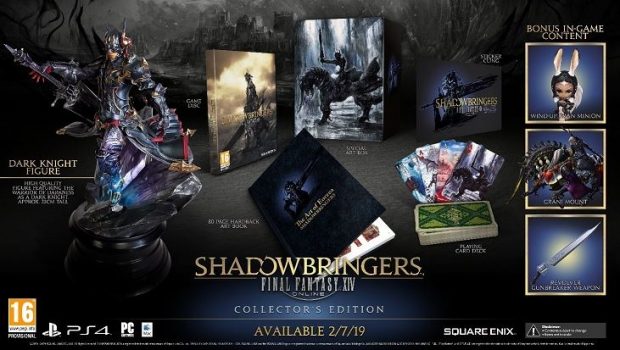 Plus First Details for the Climactic Finale of the Stormblood Narrative

Set to go live in mid-April, the collaboration was announced via a teaser trailer shown as part of the most recent Letter from the Producer LIVE, which took place during the FINAL FANTASY XIV Fan Festival in Paris over the weekend. In it, we see FINAL FANTASY XV hero Noctis Lucis Caelum entering the world of Hydaelyn with the Regalia, where he joins the Warrior of Light in battle against magitek infantry, magitek armor, and even the Messenger, Garuda, hailing from Eos.

The trailer can be seen here: https://youtu.be/_o-CtZGjJGc

Also during the Letter from the Producer LIVE, Producer & Director Naoki Yoshida revealed what FINAL FANTASY XIV Online players can expect in the coming months as the Stormblood™ expansion reaches its conclusion. A schedule of upcoming patches and their content is below:

These new announcements end a weekend full of fresh information about the third expansion for the MMO, FINAL FANTASY XIV: Shadowbringers, which launches on 2nd July 2019. Alongside the release date, first looks at the new ‘Gunbreaker’ job and ‘Viera’ race were shown, while an extended teaser trailer revealed more of what players can expect: https://youtu.be/h1OUNHqp3BE

Pre-orders for Shadowbringers will open exclusively on the SQUARE ENIX Store from 6th February. Anyone pre-ordering will be eligible to receive the following items, which will be delivered starting 1st March, 2019 at 8am GMT:

Thanks to items being delivered ahead of launch, anyone pre-ordering Shadowbringers will be able to receive their Aetheryte Earrings to catch-up to level 70 before the expansion releases on 2nd July.

Fans can look forward to more information on Shadowbringers at the Fan Festival in Tokyo on 23rd – 24th March, 2019. All Fan Festival events will be streamed free of charge on the official FINAL FANTASY XIV Twitch channel: https://www.twitch.tv/finalfantasyxiv

*Early access start date subject to change. Please note that there is a possibility of maintenance taking place during the early access period.