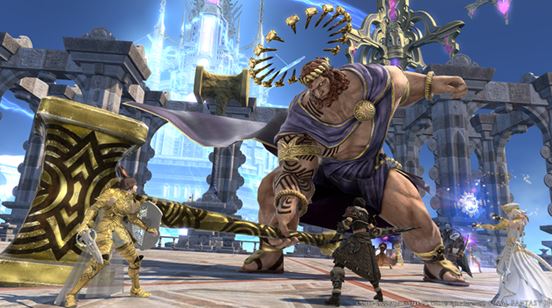 Patch 6.1 will also mark the first implementation of the new Duty Support System for A Realm Reborn™ (2.0) content. With this new system, all 4-player main scenario dungeons and trials will be able to be played solo alongside a party of NPCs. Major revisions to Cape Westwind and later duties are also planned to further support an accessible, solo-play experience. The Duty Support System will also be expanded in future updates to support Patch 2.x content, as well as Heavensward™ expansion content and beyond.

In addition to the trailer, Yoshida unveiled further details on some of the content players will experience in the Patch 6.1x series, such as:

·        New 24-Player Alliance Raid – The first part of an all-new original alliance raid series, Myths of the Realm: Aglaia will challenge players as they learn more about the divinities known as the Twelve.·        New Tribal Quests – Starting with Patch 6.15, players will be able to experience new Arkasodara tribe quests for battle classes and jobs.

·        New Residential Area – Plots in Empyreum, the new Ishgardian residential district, will become available for purchase. An overview of the plot purchase system as well as an initial schedule for lottery system sales were presented.

·        Adventurer Plates (Beta Version) – The new Adventurer Plates feature was showcased in detail. Player portraits can be customised to include lighting, animation, and camera angles using a character’s current appearance, and multiple portraits can be saved for future use. The character profiles can include information such as favourite job and title, playstyle preference, active play times, and more.

·        Additional content including job adjustments, the ability to try on gear available on the FFXIV Online Store, system updates, and more.

SQUARE ENIX also announced that PvP gear inspired by the hit Japanese TV show GARO will return with Patch 6.1. Players will be able to earn special mounts and gear modeled after the show designed by legendary character designer Keita Amemiya. New jobs introduced in Shadowbringers™ and Endwalker will now be able to equip this collaboration gear.

Patch 6.1 will also launch with a new dungeon and Unreal trial, Ultima’s Bane (Unreal), as well as the new Unending Codex, an assortment of information on characters and terms added to your Collection which will be updated as you progress through the 6.1 main scenario.

Patch 6.11 is set to bring a new Ultimate Duty – Dragonsong’s Reprise, while players can also look forward to the “Somehow Further Hildibrand Adventures” sidequest and new Custom Deliveries launching in Patch 6.15. Data Center Travel will be added in Patch 6.18.

For more details and the latest updates, visit the official Patch 6.1 promotional website at: https://sqex.to/WNmob

Fans of THE PRIMALS, the official FFXIV band led by Sound Director Masayoshi Soken, can also look forward to their new album, THE PRIMALS – Beyond the Shadow launching globally on May 25, 2022. This new album is available for pre-order at the SQUARE ENIX Store: https://sqex.to/r59q4

Finally, the latest FINAL FANTASY XIV art book, titled FINAL FANTASY XIV: Endwalker – The Art of Resurrection -Among the Stars-, was announced. This oversized full-colour art book contains artwork created during the development of Endwalker, featuring illustrations of the new jobs, sage and reaper, as well as new locations including Old Sharlayan and Radz-at-Han, dungeons, trials, equipment and more. This volume offers concept art, reference images and messages from the artists to commemorate the conclusion of the Hydaelyn and Zodiark saga. Physical art books will also include an exclusive Wind-up Ragnarok minion item code.

FINAL FANTASY XIV: Endwalker – The Art of Resurrection -Among the Stars- is scheduled for release on Sept. 13, 2022, and is now available for pre-order at the SQUARE ENIX store with pre-orders at other major booksellers beginning from April 2. Visit the SQUARE ENIX Store at: https://sqex.to/f0Jjb

The full Letter from the Producer LIVE broadcast can be viewed at: https://sqex.to/DWWb9

With more than 25 million total registered players, there has never been a better time for newcomers to begin their adventures in the critically acclaimed FINAL FANTASY XIV Online saga. The expanded Free Trial now includes all content from A Realm Reborn and the Heavensward expansion (and updates through Patch 3.56), as well as an additional playable race (Au Ra), and three additional playable jobs (Dark Knight, Astrologian, and Machinist). Free Trial players can enjoy hundreds of hours of award-winning gameplay and story experiences equivalent to two full FINAL FANTASY titles, without limit on playtime. More information is available here: http://sqex.to/FFXIVFreeTrial