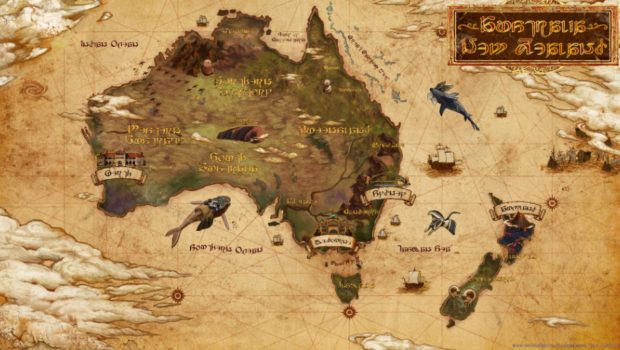 SQUARE ENIX® is today celebrating the official launch of critically acclaimed MMORPG FINAL FANTASY® XIV Online’s Oceania Data Centre and announcing the various methods in which its launch will be supported.

Launching alongside Patch 6.08 today, the Oceania Data Centre will be accessible for new character creation, with Home World Transfers being permitted from 26th January. Five Worlds will be available at this time, with all Worlds being designated as “New Worlds”, meaning players who transfer to or create new characters on them will receive special bonuses, including:

Full details on the various perks and bonuses can be viewed here: https://sqex.to/GPWd0

To celebrate the launch, a map of Australia and New Zealand has been created in the style of the in-game world map of Hydaelyn. It contains major cities and landmarks, alongside a selection of in-game creatures that may be familiar for those in the region. A desktop wallpaper version of the map is available to download here: https://sqex.link/FFXIV_ANZ_map

Primarily planned to support a smoother play experience for all in the Oceania region, the Oceania Data Centre also marks the first part of a plan to expand global server capacity for the game and combat congestion in the face of continually growing player numbers.

Additionally, due to the opening of the Oceania Data Centre raising the global server capacity and the fact existing players’ play time and log-in tendencies are gradually returning to normal, the decision has been made to resume sales of the FINAL FANTASY XIV Online Starter Edition and Complete Edition as of today. New registrations for the Free Trial remain suspended as of today, but the situation will be monitored regularly to identify a time in which registrations can be reopened.

Full details on sales resuming and the future planned expansions for the North American, European, and Japanese Data Centres can be found here: https://sqex.to/4arS7

Finally, the All Saints’ Wake in-game event is currently underway in FINAL FANTASY XIV Online. From today until 2nd February, players wishing to partake in this year’s spooky event should seek out the Adventurers’ Guild Investigator in Old Gridania and embark on their quest to obtain some special rewards, including:

Moredetails on this year’s All Saints’ Wake event can be found here: https://sqex.to/UapeH

The Endwalker main theme song is available for digital download and features vocals by Sam Carter from the chart-topping band Architects. You can watch the official music video here: https://youtu.be/FXYUjJrGMjA