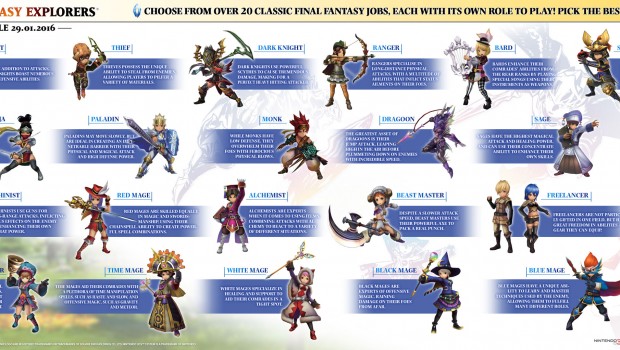 SYDNEY, 20TH November 2015 – The Dragoon, Black Mage, Monk and Ninja job classes are just some of the 21 different jobs for adventurers to learn and master in FINAL FANTASY EXPLORERS® to defeat the realm’s mightiest monsters. The upcoming action-RPG allows adventurers to play solo or band together with up to three friends to gather the crystals scattered throughout the world.

The jobs system has evolved over the years into a beloved part of the FINAL FANTASY® series, and is an integral part of FINAL FANTASY EXPLORERS. Each of the 21 jobs possess their own unique abilities and skillsets, allowing players a tactical edge when switching, combining and levelling between jobs, and creating endless amounts of character customisation for all skill levels. Additionally, the PAL release will also include the specialised Blue Mage and Samurai jobs, which were previously only available as DLC in Japan.