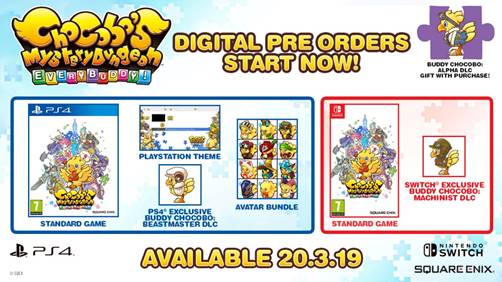 Fans and new players alike can celebrate the arrival of classic FINAL FANTASY® titles on modern platforms starting with today’s arrival of FINAL FANTASY IX on the Nintendo Switch™ system, the Xbox One family of devices, and Windows 10. The release is followed closely by Chocobo’s Mystery Dungeon EVERY BUDDY!™ launching 20th March and FINAL FANTASY VII releasing on 26th March.

Originally released in 2000, FINAL FANTASY IX is a thrilling fantasy tale of love, war, magic and self-discovery. Newcomers and veterans alike can experience legendary moments with Zidane, Vivi, princess Garnet and others with modern enhancements on the Xbox One, Windows 10 and Nintendo Switch, including high-definition movies and character models, auto-save functionality and more.

The fun continues next month with Chocobo’s Mystery Dungeon EVERY BUDDY! on the Nintendo Switch system and the PlayStation®4 computer entertainment system on 20th March. The reworking of the 2007 game Final Fantasy Fables: Chocobo’s Dungeon is back and better than ever, with unique new dungeons, a new buddy system to recruit monsters and other characters as allies, and a local co-op system to play with your friends as you manoeuvre through randomly generated dungeons.

Additionally, on 26th March players can return to the original FINAL FANTASY VII on Nintendo Switch™ and the Xbox One family of devices. FINAL FANTASY VII follows the epic adventure of Cloud and his allies as they get caught up in a massive struggle to stop the threat of Sephiroth and save the planet. The title brings its groundbreaking story and gameplay with high-definition graphics and the addition of modern features such as auto-save, enemy encounter options and more.