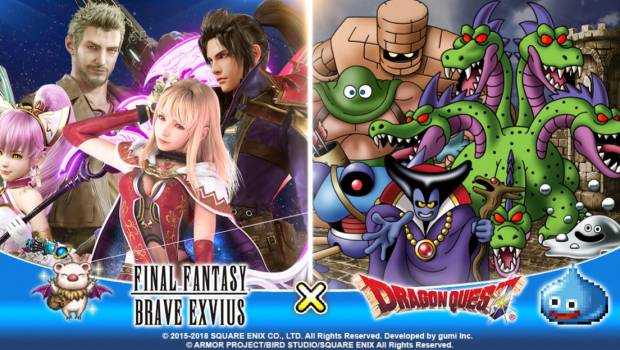 All players that launch the app during the event may dive into wave battle-type quests where consecutive groups of monsters can be fought for a limited period of time. DRAGON QUEST monsters Golem and Robbin’ ‘Ood can be found in regular battles, while formidable foes Dragonlord and Orochi will be classified as bosses. Medals earned from defeating these monsters in raids may be exchanged for Erdrick’s Sword, among other famous equipment and items from the DRAGON QUEST series.

Players have the chance to obtain the Dragonlord, Liquid Metal Slime, Robbin’ ‘Ood, Golem, Killing Machine, and Orochi units from rare summoning during the campaign period. Also, Slime units will be awarded to all participants as daily login bonuses throughout the campaign, with additional Slime units obtainable by trading medals earned during the event period.

FINAL FANTASY BRAVE EXVIUS is available now as a free-to-play app (with in-app purchases) through the App Store® and Google Play™. The game is available in six languages: English, German, French, Spanish, Chinese (traditional) and Korean.

DRAGON QUEST XI: Echoes of an Elusive Age™ will be available for the PlayStation®4 system and STEAM® on 4th September 2018. For more information, visit: www.dq11.com