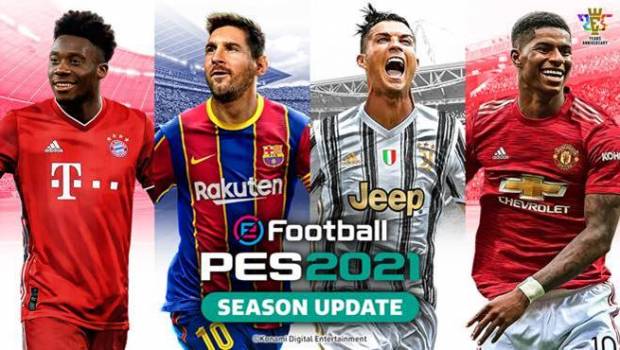 Now his sixth cover appearance for the eFootball PES franchise, Messi represents the highest quality of football, consistently achieved, over a storied career and is appropriate as KONAMI celebrates the franchise’s 25th anniversary.

Cristiano Ronaldo, star striker for Juventus, is the latest to be named as an official eFootball PES ambassador and will feature in a range of promotional activities over the course of the year.

In addition, Manchester United’s Rashford and FC Bayern’s Davies have also joined the ranks of official ambassadors, as both young stars continue to dominate on the pitch and earn places in the hearts of fans worldwide.

Jonas Lygaard, Senior Director Brand & Business Development at Konami Digital Entertainment B.V. commented: “I am incredibly proud of the cover that we’ve assembled for PES 2021. We made a big change last year with the presentation of four ambassadors and we were keen to raise the bar this year with a world first – Messi and Ronaldo together at last.”

For all the latest news from the eFootball PES franchise and for further information, please follow: