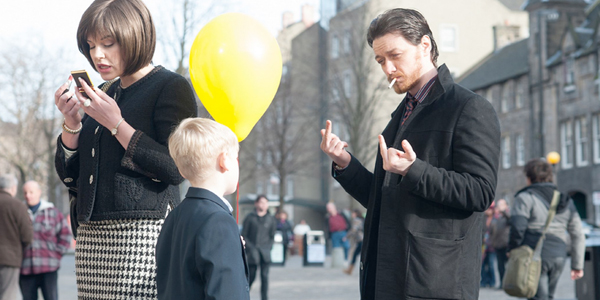 From the creator of Trainspotting   comes FILTH, a fast-paced, razor-sharp black comedy starring James McAvoy in   a career-making performance as corrupt, sociopathic Edinburgh cop, Bruce   Robertson. With a stellar cast including Imogen Poots, the imperious Jim   Broadbent and Jamie Bell, FILTH was one of the top box office successes in   the UK.

Desperately bored with his duties as a Detective Sergeant, Bruce (McAvoy)   survives on a mixture of cocaine, alcohol and sexually abusive relationships.   Determined to secure the lucrative promotion to Detective Inspector and   reconcile with his estranged wife and daughter, Bruce begins concocting a   plan to sabotage his colleagues, including Amanda Drummond (Poots). Bruce   turns his nearest rivals against each other, one by one, and by increasingly   creative means.

Assigned to lead the investigation surrounding the murder of a Japanese student,   Bruce soon finds his life spiralling out of control. With increasingly   frequent hallucinations featuring his psychiatrist, Dr.Rossi (Broadbent),   Bruce stumbles, schemes and manipulates his way through the investigation,   with his mild-mannered friend Bladesey (Eddie Marsan) and partner Ray Lennox   (Bell) at his side.

When his drug addiction and unchecked psychological issues combine to test   his grip on reality, they finally push him over the edge.