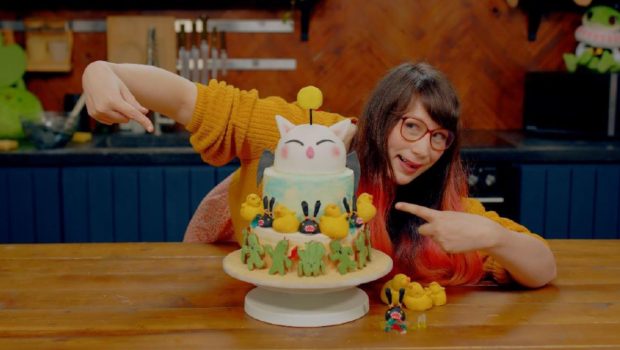 SQUARE ENIX® is kicking off celebrations for the 8th anniversary of critically acclaimed MMO FINAL FANTASY® XIV Online with the creation of a birthday cake from former Great British Bake Off star and culinarian supreme Kim-Joy. With a design whisked up by the baker’s brain, the cake consists of numerous elements celebrating FINAL FANTASY XIV Online and the legacy of the game so far.

The three-tiered cake has lemon sponge at its core and is coated with buttercream, with decorations paying tribute to some familiar faces from the game, including:

• Cactuars, Sabotenders and Gigantenders – made into gingerbread cookies and decorated with royal icing, placed on a sandy desert backdrop made from biscuit.
• Fat Chocobos – made from tangzhong bread, sitting on a watercolour blue and white backdrop representing the sky.
• Spriggans – made from mochi and filled with a thick custard, clutching their precious gems made from kohakutou-style jelly.
• Topped with a fondant-covered Moogle

Alongside this, the celebrations continue in the realm of Eorzea as The Rising in-game event returns. From today until 9th September, players who take part will be able to journey to the Steps of Nald in the city of Ul’dah in order to help out Kipih Jakkya, who seems to be in some sort of trouble.

In-game rewards for participating in the event include:

• Red Moon Parasol – This elegant parasol features an image of a flaming moon, which seems strangely familiar.
• Nymeia Potpourri – Made from the alchemically treated petals of Nymeia lilies, this fragrant bundle of potpourri brings a sense of tranquility to even the most troubled souls.

Full details on The Rising 2021 in-game event can be found here: https://sqex.to/r7g2n

With more than 22 million total registered players, there has never been a better time for newcomers to begin their adventures in the critically acclaimed FINAL FANTASY XIV Online saga. The expanded Free Trial now includes all content from A Realm Reborn and the Heavensward™ expansion (and updates through Patch 3.56), as well as an additional playable race (Au Ra), and three additional playable jobs (Dark Knight, Astrologian, and Machinist). Free Trial players can enjoy hundreds of hours of award-winning gameplay and story experiences equivalent to two full FINAL FANTASY titles, without limit on playtime. More information is available here: https://sqex.to/FFXIVFreeTrial