I Fell From Grace (PC) Review

Summary: I Fell From Grace is a disturbingly mature adventure game with a great narrative, yet fairly standard gameplay mechanics.

It seems that something of a trend has been developing with indie video games over the last few years, as more and more developers seem willing to push maturity to the forefront of their game narratives. It’s an aspect of the industry that indies are certainly leading in, as AAA developers generally continue to shy away from mature and disturbing narrative content. I had this realisation when playing through I Fell From Grace, a game that the words ‘mature’ and ‘disturbing’ aptly describe. 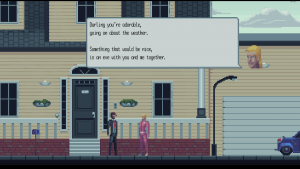 I Fell From Grace is a 2D sidescrolling adventure game in the most traditional sense. In fact it might be more appropriate to describe it as a mature, narrative-driven, traditional point and click adventure game, without the pointing and clicking. The gameplay revolves around picking up items, conversing with characters and using certain items to solve puzzles in order to progress through the story, all of which is controlled with the keyboard or gamepad.

The narrative follows your character Henry as he attempts to cure his wife’s terminal illness through mysterious and terrifying supernatural methods. The story takes place in an unknown present-day city, and the majority of the game follows Henry as he tries to manage a work-life balance whilst also dealing with the consequences of the various actions he takes throughout the game. It’s an engrossing adventure that had me absolutely hooked from the start, for a number of reasons. The first being the game’s intense, bizarre, horror atmosphere. 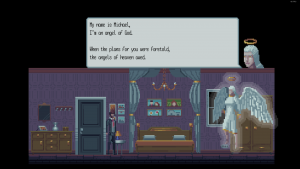 There’s a very subtle, yet very distinct air of unease to every aspect of I Fell From Grace. From the way the character’s interact with each other and comment on their own sad lives, to the various horrifying visions that haunt Henry throughout the game – it’s all quite disturbing, yet also truly captivating. I wanted to see how the story played out because it was just so bizarre, and in some ways, genuinely unsettling. There are vastly different multiple endings based on the decisions you make throughout the game, and you’ll need to play through the whole thing numerous times to see them all. Though once you become familiar with the large, open world, a playthrough only takes an hour or so. 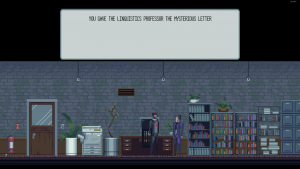 Apart from the character interactions and Henry’s self-obsessed inner-monologue, the main driver of this feeling of unease is the great music and visual design. The music uses ambient electro synths to create eerie, moody, unsettling background tones that give an air of mystery and anxiety to the various set pieces. Simlarly, the detailed, 2D pixel-art visuals expertly use colour pallets to add to the eerie atmosphere, whilst also conveying some truly gruesome, disturbing imagery. 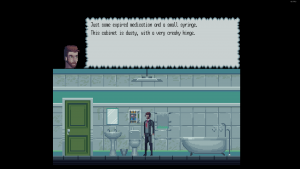 My only issue with I Fell From Grace is the lack of a quest log or an objective reminder. The game is quite dense with areas to explore and people to talk to, and the only indication you get as to your next objective comes from conversations between characters or Henry’s inner-monologue that is never repeated. This resulted in significant amounts of time being wasted whenever I came back to the game after a break, as I couldn’t remember what I was meant to do, and there was no way to be reminded of your previous objective. There are also a number of side quests throughout the game, and keeping track of your progression through each of them can be a bit much to remember. 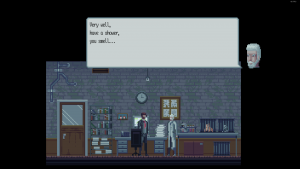 I Fell From Grace has one of the most unique and interesting narratives I’ve seen in any game this year. The unsettling story tells a compelling and mysterious tale with flawed characters navigating some truly strange events. The traditional adventure game mechanics are serviceable and keeps the narrative flowing, yet the lack of a quest log or general sense of objective means you’ll get more enjoyment out of this one playing with a guide until you become familiar with the various set pieces. Definitely worth picking up if you’re a fan of weird stories or traditional adventure games.