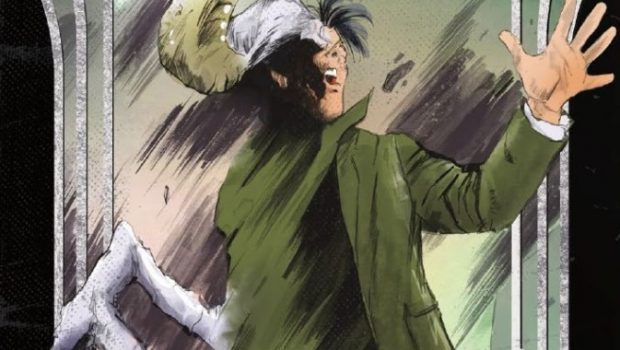 Summary: A highly compelling and poignant end to Fearscape.

In the final chapter of Fearscape, Henry Henry reveals to the reader his own greatest fear.

This issue picks up where the previous one finished, with Henry holding the baby Muse in one arm and a knife in the other. Jill interrupts, stopping Henry from committing the heinous deed. In response, Henry drops the baby and turns his attention towards Jill, aggressively shoving her against the wall, finally standing over Jill with the intention of stabbing her with the knife. After a violent struggle involving other key characters, Henry retreats from the scene wounded and defenseless, making his way back to the Fearscape and the only allies her has left: the triplets.  Upon finding the triplets, he is reminded that that he still has his end of the bargain to uphold.

Well, here we are at the end of this compelling and poignant story, where we are revealed a lot about Henry and the events that shaped this man into the monster he became. It’s quite heavy and moving stuff and I’m sure Henry would scoff at what I have to say about the sense of pathos I felt about this awful character upon learning more about his troubled past. I won’t go into too much detail about the developments that unfolded for fear of spoiling it for you, but what I will say is that there is more to Henry than being a distrustful, murderous fraud.

Through the layers of his past we see his personal journey through fear, pain, humiliation and torment at the hand of someone who he admired, trusted and looked up to. I rather like the uncomfortable position that Ryan O’Sullivan puts us in, as one can’t help but feel a sense of empathy and compassion towards Henry during this dark hour. My perspective has somewhat changed regarding Henry, changing from a selfish and narcissistic character to a more sympathetic and tragic one. Yes, he’s still awful and has done despicable things, however, these new developments add more complexities to Henry. Things aren’t so black and white now. In fact, I pity the bastard a bit.

This was a highly moving issue, and Andrea Mutti’s art did a wonderful job at translating that raw emotion on the page. We get to see a side to Henry that we haven’t seen before, a more vulnerable, anxious and fearful side. His face says it all, frozen in terrified grimaces as the realisation of his actions and the events of his past come to light. These scenes were impactful and visually striking through their wonderfully detailed facial nuances. Mutti’s brushstrokes have a lovely sense of movement in this issue, helping to reinforce the overall flow and energy of the story. It all comes together to form a visually compelling final chapter. Awesome job! The colouring by Vladimir Popov is beautiful and quite vibrant, working wonderfully in heightening the intense emotions and tonal progression of the story.

Overall, I thought that this was a satisfying end to Fearscape. I’ve absolutely loved this story and the risks it has taken, finding it to be truly unique and thought-provoking read. Wow guys, you’ve all made something very special here. 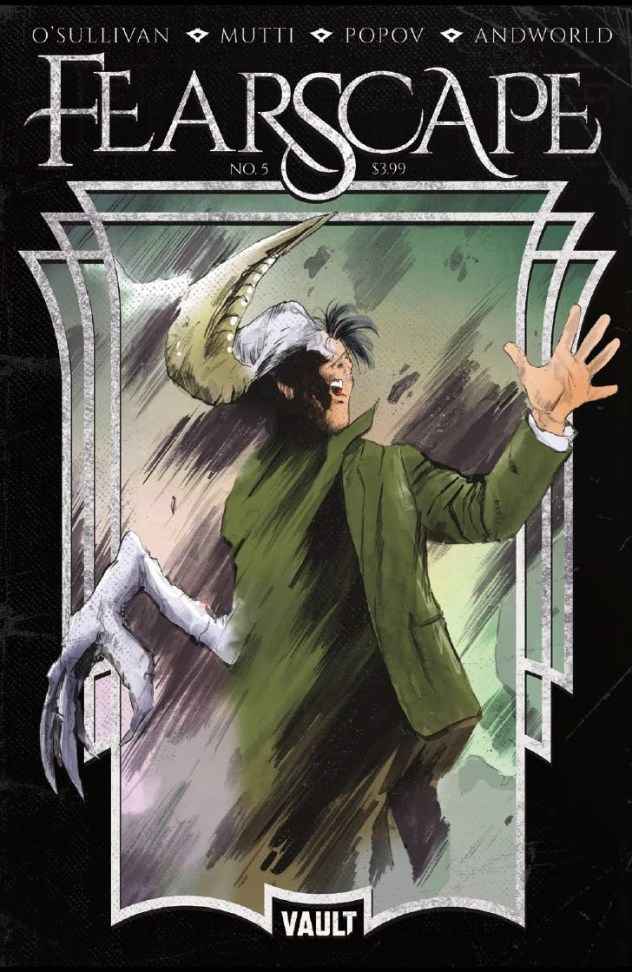