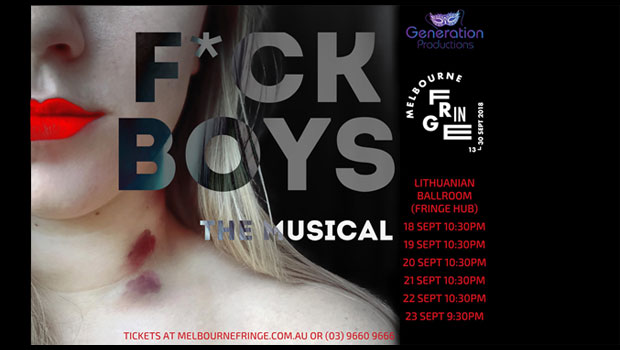 (For Immediate Release: 10 August 2018) – Fresh off a sold-out run and Critics’ Choice Award winner at the Orlando Fringe Festival in 2018, F*ckboys the Musical will make its international debut at this year’s Melbourne Fringe Festival 18-23 September.

In this hilarious, one-act, original musical and dramatic comedy, four women will teach you the skills you need to take down the most dangerous predators plaguing the modern dating scene: the F*ckboy.

Karaoke Night every Wednesday with your best friends in the world. What could possibly mess that up? You guessed it: F*ckboys. An epidemic that is truly sweeping the globe, F**kboys are “literal garbage who must be stopped.”

Written and directed by Savannah Cassidy Pedersen, F*ckboys the Musical takes a pointed look at how today’s social atmosphere has always been driven by the ever present douche of a human being: the F*ckboy.

“This show is meant to be a satirical take on modern dating,” says Ms Pederson, ‘like How I Met Your Mother, Friends, or Sex and the City, but it’s also a real account of how my life was changed after a breakup. Any woman who has had their heart broken, or knows someone who has, needs to see this show. It isn’t merely a comedy, it’s a redemption story.”

F*ckboys is a musical extravaganza you won’t want to miss!