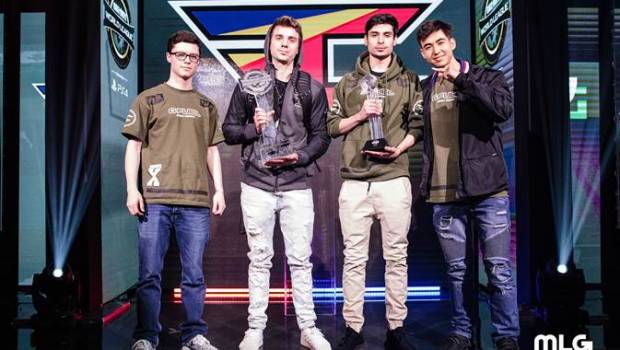 April 12, 2018 – After eight weeks of intense Call of Duty®: WWII action, FaZe Clan earned the title of CWL Pro League Stage 1 champions after an action-packed competition this past weekend at the MLG Arena in Columbus, Ohio. The CWL Pro League Stage 1 Playoffs, presented by PlayStation®4, concluded with OpTic Gaming, Luminosity Gaming, and Team Kaliber rounding out the top four spots over the weekend.

For their win, CWL Pro League Stage 1 champions FaZe Clan earn the majority stake of the event’s $500,000 USD prize pool and become the early season favourite in the record-setting Call of Duty World League season featuring $4.2 million USD in total prizing. The team will also have their names hoisted on a banner at a future event in the G FUEL Hall of Champions, where championship teams throughout CWL history are celebrated for their achievements within the entrance of Call of Duty World League events.

Tommy “ZooMaa” Paparratto of FaZe Clan was unstoppable during Stage 1 of the CWL Pro League, recognised as the ASTRO Gaming CWL MVP. “It feels incredible to win. It’s been three years since FaZe won a championship and we knew we were good enough to do it. I want to cry right now, I’m so happy. I love my team,” said Paparratto after FaZe Clan’s championship victory.

A sold-out crowd at the MLG Arena in Columbus, Ohio, witnessed the action while fans from around the world watched FaZe Clan hoist the trophy live on MLG.com/CallofDuty and Twitch.tv/CallofDuty, as well as within the in-game Call of Duty®: WWII theatre.

Here are the final placements for the CWL Pro League Stage 1 Playoffs:

The next event in the Call of Duty® World League schedule is the CWL Seattle Open, taking place April 20 – 22. On Thursday, April 19, the CWL will hold a relegation tournament to determine the final four teams to join the top-6 teams from Stage 1 of the CWL Pro League Stage 1 in Stage 2 competition beginning in May. Stage 1 teams Evil Geniuses from the United States, UK’s Epsilon Esports, Australia’s Mindfreak, and France’s Team Vitality will compete against top, qualified online teams for Stage 2 placement. Earning a CWL Pro League Stage 2 pool placement also guarantees a chance to compete at the 2018 CWL Championship later this summer.

This weekend’s Stage 1 finals follows a strong start to the 2018 CWL season, which not only features a record-setting season-long, total prize purse, but also record levels of participation at CWL events.  Equally, the 2018 season also has delivered a robust roster of league partners and sponsors including PlayStation® 4, SCUF Gaming, G FUEL and Astro Gaming.

“The Call of Duty World League is fortunate to have partners that share our dedication to bringing Call of Duty fans the best-in-class, competitive experience of the CWL. Thank you to our partners at PlayStation, SCUF Gaming, G FUEL, and Astro Gaming for their continued support throughout this record-setting season,” said Call of Duty Esports Director, Kevin Flynn.

“PlayStation’s continued partnership with the CWL enables the best Call of Duty players in the world to compete on the highest level on the powerful PS4 Pro console.  With our goal of making PlayStation the best place to play, watch, learn about and discover esports, this sponsorship represents a key step. By working with the CWL, we can provide gamers of all levels with the content and access to become better Call of Duty players,” said Phil Rosenberg, Head of Global Publisher and Developer Relations, SIE.

“CWL has continued to set new heights for competitive leagues in esports.  For several years, we have worked closely with the CWL to supply players with the controllers they need to win on the biggest stage, and we’re delighted that now we will be capturing the competition’s greatest moments through the SCUF Play of the Game. As a long-standing partner in the CWL, it is great to see the largest prize pool in league history on the line in 2018. We’re excited to share with fans a front row seat to the precision and speed that makes CWL players and the CWL best in class,” said Duncan Ironmonger, CEO & Founder of SCUF Gaming.

“We are excited to continue our proven partnership with CWL. This season is already shaping up as the best yet in Call of Duty esports history, which is a reflection of the tremendous passion and excitement across the Call of Duty community. Both the CWL and G FUEL have demonstrated their commitment to the community, and the new Hall of Champions banner exhibit pays homage to the pros that paved the way for future all-stars,” added Cliff Morgan, Founder and Chief Executive Officer of G FUEL.

“ASTRO Gaming is proud to be the Official Headset and MixAmp of the Call of Duty World League, and thrilled to see the league continue to raise the bar for competitive gaming,” said Aron Drayer, Vice President of Marketing, ASTRO Gaming. “Our team works closely with the CWL to ensure we are delivering the best audio and voice chat solution for athletes on every team with our MixAmp TR. We’re also activating on-site at each CWL event, loaning headsets to competitors that need them, hosting giveaway challenges from our booth, and supporting all the MLG GameBattles tournaments. ASTRO Gaming is committed to ensuring every Call of Duty competitor has a flawless audio experience at every event this season.”

Scuf Gaming®, global leader and innovator of gaming peripherals and winner of eSports Industry Awards for “Best Hardware” in 2016, provides tactical gear for elite gamers where over 90% of the top professional gamers in the world use SCUF. Selling high-end accessories and customized gaming controllers for console and PC, SCUF offers a number of functional and

design features custom built to increase hand use and improve gameplay. Built to specification, SCUF controllers cater to competitive and casual gamers who recognize that one size does not fit all. The SCUF controller has features, which are covered by 36 granted patents, and another 69 pending; protecting 3 key areas of a controller; back control functions and handles, trigger control mechanisms and thumbstick control area. For additional information about Scuf Gaming, please visit www.scufgaming.com or follow us on Twitter, Facebook, Instagram, YouTube, or Snapchat.

Headquartered in Santa Monica, California, Activision Publishing, Inc. is a leading global producer and publisher of interactive entertainment. Activision maintains operations throughout the world and is a division of Activision Blizzard, Inc. (NASDAQ: ATVI), an S&P 500 company.  More information about Activision and its products can be found on the company’s website, www.activision.com or by following @Activision.