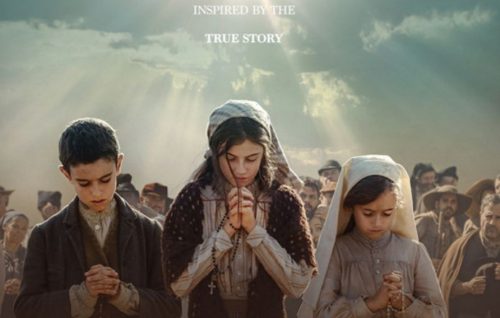 This film tells the story of ten year-old Lucia dos Santos and her two younger cousins Francisco and Jacinta Marto, who claimed to have seen multiple visions of the Blessed Virgin Mary in Fatima, Portugal in 1917.

The appearance of the angel is not believed by Lucia’s pious mother and many of those around her and is at first easily dismissed as either childish nonsense, actions of an unknown trickster or childhood exaggeration & imagination.

As with such things, word spread of the visions and Lucia became known to some as a seer or some kind of prophet, which inspired thousands of pilgrims to flock to Fatima, some seeking to be healed, or have other miracles performed, whilst others simply wanted to be closer to God.

The visions professed to Lucia a number of secrets and instructions that foretold events such as the end of World War I and what is shown in the film as the nuclear explosions in Hiroshima and Nagasaki, the pivotal events of World War II as consequences for people disrespecting God.

The constant theme and messaging from the visions is one of prayer and repentance, without which will lead to the negative consequences she (angel) warned.

This film explores these aspects of Lucia’s story from a more central and neutral point of view, showing the vision as seen by the children, the reactions of Lucia, Francisco and Jacinta as well as their family, the townsfolk and officials with equal weight.

There is a sense of plausibility from each perspective including a sense of possible mental illness of the children which is indirectly explored through the cinematography, their own self-doubt among the children and the sharp questioning by Lucia’s mother, officials and the priests.

The turning point of the film, which gives rise to the credibility of the true story of these events, is the final miracle performed by the angel on 13th of October 1917 called the Miracle of the Sun, in which thousands of people witnessed a rare phenomenon with the sun.

The child actors absolutely steal the show with a stand out performance, although in fairness there is not really a high bar either. Harvey Keitel’s presence delivers, but his contribution seems more for the purposes preselection for the film to ride on his A-List notoriety; suffice to say that his contribution to the film should not have lasted more than three days of filming and his role could have been played by anyone.

This film is set upon a wonderful backdrop and filmed mostly on location in Portugal, which amplifies the authenticity of the story. However this film simply lacks any great buy in and is likely to lead to a split proportion of enjoyment among those of faith and likewise those not of any faith equally. The fact is this film is a somewhat enjoyable film and a well pieced together dramatized re-enactment of the events in Fatima, which unfortunately would have been far better served in a documentary style with or without the theatrical aspects. You will be equally or better served by a 20 minute YouTube video about the subject than this film.

Summary: Enjoyable, and worth your time; but you will be equally or better served by a 20 minute YouTube video about the subject than this film.