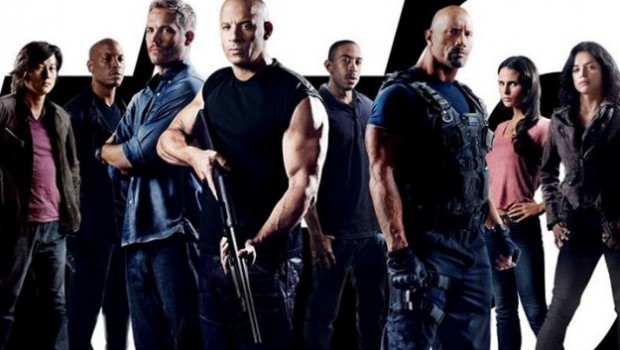 Here we are again…again, sitting behind the wheel of a fast car watching a near naked woman holding a marker to begin a street race. It must be time for another installment of the Fast and Furious franchise. This series, which started in 2001, has been as ostentatious as its characters by including the staggering number of installments in its movie titles. Where decade long series like Rocky and Rambo usually dropped the number from its name after the fourth or fifth chapter, the Fast and Furious series have boldly stuck it out there for all to see. The movies have managed to survive the cynical view of some moviegoers by always attempting to give the series new life. This has been done through new characters constantly being introduced (or killed off) and the gradual changing of theme from illegal street racing to over the top heist jobs.

Things start off right where the last movie left us but with some changes. Brian (Paul Walker) is adapting to his new life of being a father and husband. His wife Mia (Jordana Brewster) is playing the background role of mum and concerned wife. As the story goes on to become more action based, this relationship between husband and wife becomes pretty archaic with Brian going off to do the fighting while Mia keeps the kid safe. Ugh man fight. Ugh woman stay. Vin Diesel isn’t far behind this caveman premise with every word he says sounding like he could have easily played the Hulk. Possibly the deep, meathead sounds that leave his mouth are a left over habit from playing the one-word saying Groot from Guardians of the Galaxy. It really doesn’t matter why and who our beloved main characters are fighting against this time as this story follows a pretty simple formula mixed in with some incredible stunts to keep the crowd distracted. Some of the theatrics are so extreme in fact that it looks like the writers are becoming so aware of this silliness that they’re turning it into a joke on purpose. See scene where sports car gets smashed through two of the world’s tallest buildings with no real consequence. At this point you might as well shut off all reasonable thinking to enjoy this 2 hour long fuel injected journey. 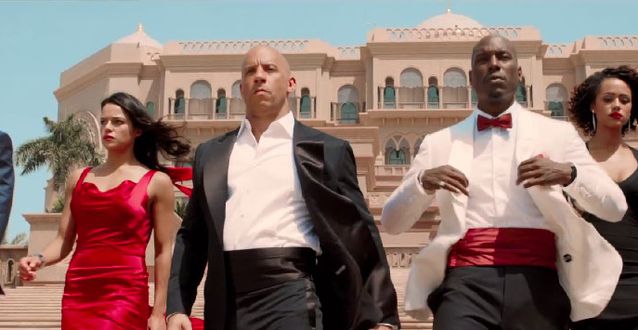 At the end of Fast & Furious 6 we were briefly introduced to the nemesis Deckard Shaw (Jason Statham). Now as most action films’ stories are dictated more by the villain and less by the heroes we are given what appears to be a more ‘dark and gritty’ cliché of a villain. He’s non-American, speaks with an accent, is trained as special ops but turned rogue and now wants revenge against our good-hearted street racing family. In a way, it’s almost like the brother/revenge plot of Die Hard with a Vengeance but with sports cars. Other characters that make up this Ocean’s 11 knock off include computer genius Tej (Ludacris), funnyman Roman (Tyrese Gibson) and the forever typecast hot yet tough girl Letty (Michelle Rodriguez). Of course there’s the badass character of Hobbs (Dwayne Johnson) who swims in an ocean of action movie chestnuts that he could probably now challenge Chuck Norris’ internet meme kingdom. The movie is probably saved from being completely ridiculous as Johnson only appears in the initial and final scenes of the film. The same can be said about Statham. Besides a few key scenes he only appears when needed. His side of things is never really covered as he just tears through scenes, causing chaos for the group of heroes. 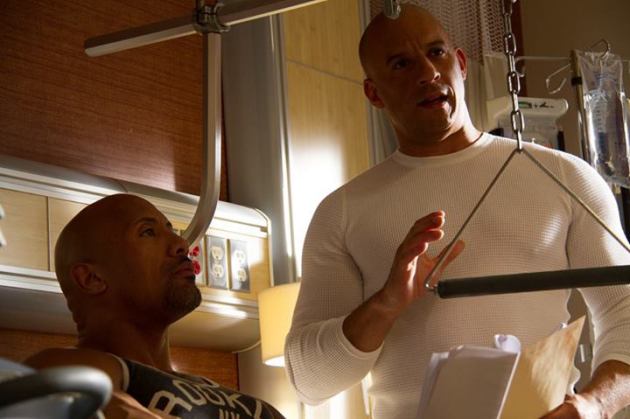 The sad element that is overshadowing this film’s fun factor is of course Paul Walker’s passing that happened in 2013. The actor’s unexpected death caused a halt in production and a massive rewrite of the script. As the running theme that’s carried on through the series has been family, it makes it even more tragic watching this knowing that it’s all coming to an end. What makes it even sadder are the scenes that reflect the real life tragedy. When Mia asks Brian to come home safe you can’t help but think this fictional worry is carrying across to an audience’s concerns in real life. Through the use of Walker’s brothers to finish key scenes in the film and quite the emotional goodbye to the actor, things get sentimental without being too cheap or tacky. The only characters to go through any real development are Brian and Letty, respectively. Brian’s change sets up for the ending of the film while Letty tries to remember her past with Dom. The amnesia aspect of Letty’s character just adds to the overall soap opera feel of the movie. 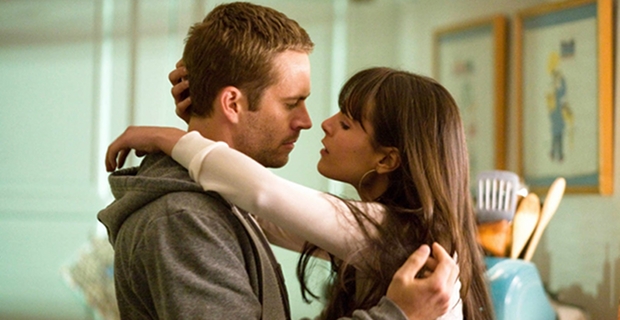 In between all the craziness that is the car chase and fight scenes, the dialogue is pure comedy gold. Writer Chris Morgan, who’s been working on the series since Tokyo Drift, has to be taking the piss with the melodrama chatter he has these characters churning out. For the love of all things holy I hope he wasn’t trying to hit a serious note with what these characters were saying. As this is the 7th edition in a series that is guilty of repeating itself, a desperate attempt at being an original story has now occurred. The story tries to be intricate but just falls flat on its face. Sure the action is great but do we really end to have two bad guys in one film? Djimon Hounsou joins in the mix as a villain and could have been saved for the 8th movie. His role just confuses the plot and doesn’t really help anything. Kurt Russell makes an appearance and plays the part of ‘only decent actor in the cast’. He manages to be funny and keep the plot moving. It’s too bad we don’t get to see if he still has the moves from his Big Trouble in Little China days. I could go on for days about everything that’s wrong with this movie but at the end of they day its all about escapism into this male teenage fantasy. Sure, the story tries to be elaborate and becomes cluttered but what’s important here is entertainment. The jet setting between scenes like Japan to the Middle East to the US is little jarring but they do display some amazing landscapes. The best (and only) way to enjoy this movie is to switch off that brain and go along for the ride. Just remember to turn it back on when the film finishes.

Summary: The best (and only) way to enjoy this movie is to switch off that brain and go along for the ride.