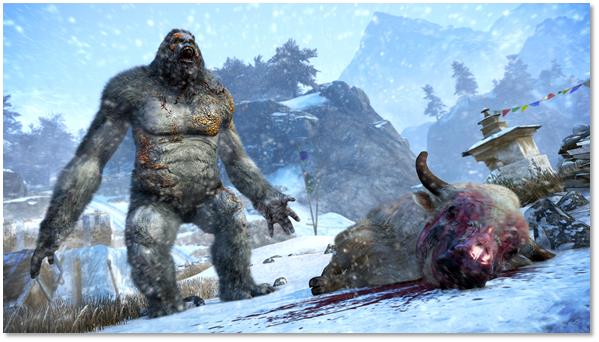 FAR CRY®4 VALLEY OF THE YETIS AVAILABLE THIS WEEK

SYDNEY, AUSTRALIA — March 10, 2015 —Ubisoft has announced that Valley of the Yetis, new add-on content for the award-winning shooter, Far Cry 4, will be released this week. It will be available on Wednesday on Xbox Live for the Xbox One and Xbox 360 video game and entertainment system from Microsoft and PC and Thursday on PlayStation Network for the PlayStation®4 and PlayStation®3 computer entertainment system.

Players have to explore and survive a valley at the top of the Himalayas in Kyrat after Ajay’s helicopter crashes and leaves him stranded on a perilous ridge. In order to stay alive, players must capture a camp for shelter and guard it from a mysterious cult. But even if successful against the cult, they must keep a look out for the fabled and dangerous yetis that populate the territory.

The Valley of the Yetis DLC includes: