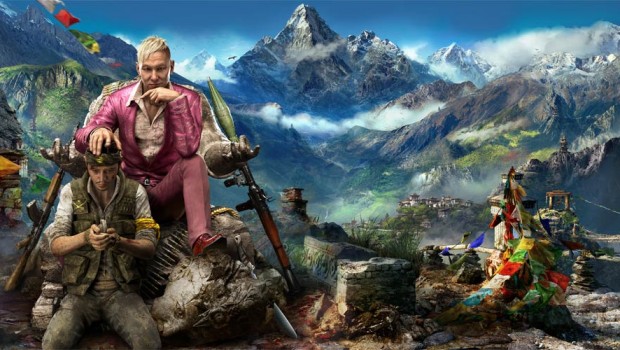 Summary: Far Cry 4 is an enjoyable, exhilarating thrill ride full of enough entertainment to keep you happy... just be nice to the elephants!

Hiding amongst the foliage, stalking the enemy outpost, I circle around its perimeter looking for possible entry points and weaknesses. As I traverse through the high grass, taking cover behind every towering tree I encounter, I produce my binoculars to get a closer look and to tag each enemy on my map to make my attack easier. Now I know there positions, I spot a cage containing a ferocious tiger and immediately decide how I’m going to strike. I unleash my rifle, line it up, and take aim. Fire! The cage door is released and the deadly predator is set free. It attacks the enemy soldiers and dispenses of each one brutally. I come in from the opposite direction, guns blazing, and wipe out the entire outpost with ease, not before I fire a few rounds into my predatory friend as he looks to make me his next victim. 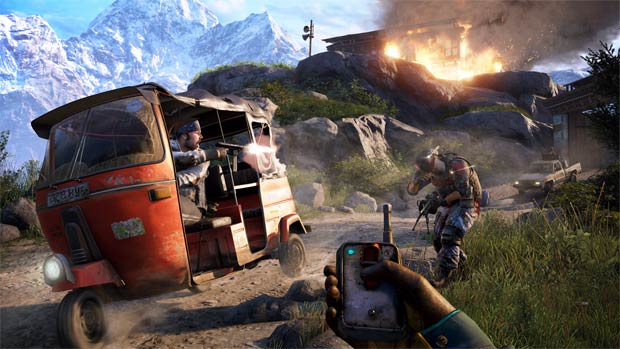 If you are a custom to Ubisoft’s Far Cry series, most notably Far Cry 3, then playing Far Cry 4 is going to give you many bouts of déjà vu. The lavish tropical waters of the beautiful, yet punishing Rook Islands set in the Pacific Ocean in Far Cry 3 have been replaced with the snow-capped peaks and pristine lakes of Kyrat, based on the Himalayan Mountains of Nepal. Where Far Cry 3 had the psychopathic Vaas to keep you on your toes, Kyrat is ruled by an equally menacing, yet charming dictator / king – Pagan Min (voiced by Troy Baker). If you enjoyed climbing towers, skinning dead animals, gathering plants, liberating enemy outposts, hunting big game and generally going gun crazy in Far Cry 3, then you’re going to enjoy Far Cry 4.

The open-world setting of Kyrat is breathtaking in every aspect. Exploring, hunting and raiding this visually stunning land is an utter joy to do. However, Where Far Cry 4 suffers slightly, is in its story and general plot. The main campaign sees you take the role of Ajay Ghale, a Kyrati who grew up in America, who has returned to his birth land to scatter the ashes of his dead mother. Within minutes of Far Cry 4 beginning, all hell breaks loose and Ajay is caught up between a civil war that has been raging between Pagan Min and the rebel army called the Golden Path. You can choose which side to fight for, which will eventually give you two possible endings depending on your actions. 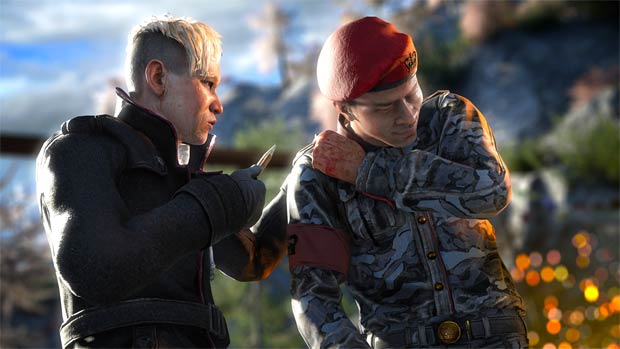 While the story has enough to keep you interested, it is not as engaging as its predecessor. This is largely due to the characters you meet throughout the game, being nowhere near as memorable as they were in Far Cry 3. Pagan Min is by no means as menacing or charismatic as Vaas, but replicating or creating a more shocking villain such as Vaas was always going to be a hard thing to achieve. Thankfully there’s much more to Far Cry 4 than the story, so that no matter what you decide to do, you won’t get bored of the unpredictable environment in which it is set.

The main draw of Far Cry 4 is exploration. Kyrati is huge. It’s easy to spend hours just driving, gliding or traversing through the lush grass land until something grabs your attention. Whether that be being attacked unexpectedly from a huge eagle, being stalked by mountain wolves or stumbling across enemy soldiers, Far Cry 4 certainly doesn’t get boring. You are going to want to explore every little area you can. Gazing off the top of a hill overlooking a lush mountain top background will ignite a burning desire to find a hang glider, and glide over for a closer look. There is plenty of motivation to want to explore the entire map thanks to Kyrati’s unpredictability and beauty with each trek into the wilderness being extremely rewarding. 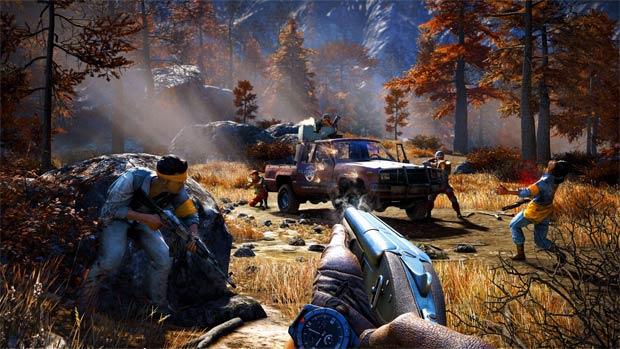 Numerous side missions are scattered throughout Kyrati. Many of them are quite generic and similar to those you’ll have experienced in Far Cry 3. Assassination missions, hunting missions, gathering medical supplies for the Golden Path and several more. Doing these missions overtime can get a little repetitive as essentially you’re doing the same thing over and over. I found that there was enough entertainment just doing my own thing, and randomly riding an elephant through the gates of an enemy outpost while firing my assault rifle gave me much more pleasure than point A to point B side missions. Being active in Far Cry 4 is enough to acquire experience that eventually leads to gaining points you can use to upgrade Ajay’s skills. Like Far Cry 3, the upgrade system is simple and easy to follow. 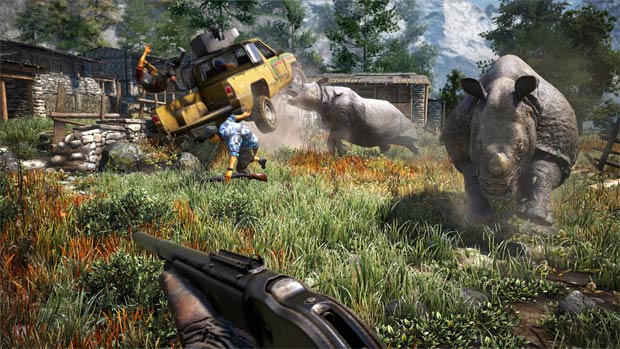 With the possibility that anything can, and will happen in Far Cry 4, it makes Ubisoft Montreal’s latest inclusion in the series an essential purchase. Granted, even though Far Cry 4 is very much a prettier version of Far Cry 3, it is still incredibly entertaining. The bar was set so high with Far Cry 3, that even though there are numerous similarities between the two games, Far Cry 4 and  Kyrati is still worthy of your exploration. Ubisoft will however now face a dilemma with the undoubted arrival of Far Cry 5 in the future because they will know they’ve exhausted the general plot of both games. To have another story of a liberating American traveller will unlikely sit well with the community of fans the Far Cry series has, and creating a brand new experience that betters both Far Cry 3 and 4 will be tricky. Nevertheless, Far Cry 4 is an enjoyable, exhilarating thrill ride full of enough entertainment to keep you happy. Just be nice to the elephants! 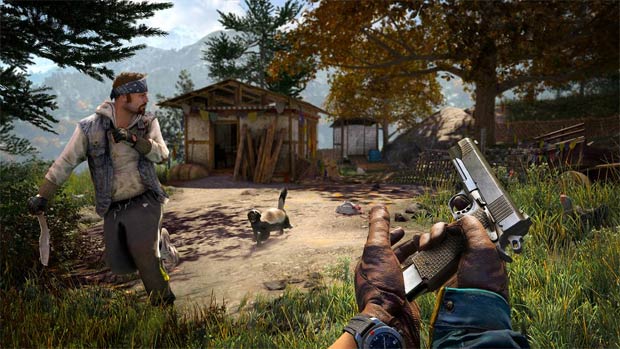 • From leopards, rhinos, black eagles, and vicious honey badgers, Kyrat is home to abundant wildlife. As you embark on your hunt for resources, know that something may be hunting you…

• Scout enemy territory from above in the all-new gyrocopter and then plummet back to earth in your wing suit. Climb aboard the back of a six-ton elephant and unleash its raw power on your enemies.

• Choose the right weapon for the job, no matter how insane or unpredictable that job might be. With a diverse arsenal, you’ll be prepared for anything. 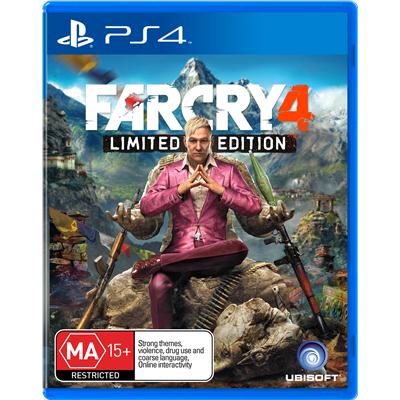