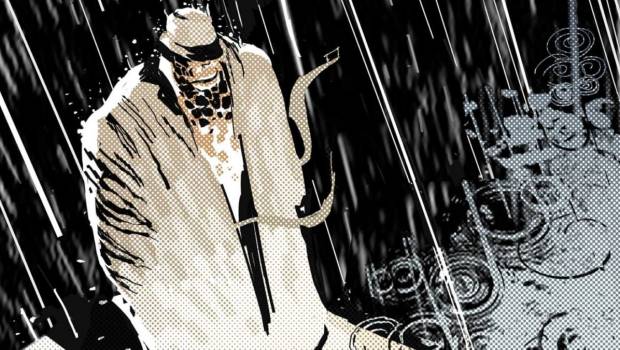 The real draw for this issue is the art. Ron Garney is credited as a “storyteller” in this issue, and rightly so. Garney manages to craft his work so that it seems like each and every page has its own artistic style, yet it still feels part of the same whole. For example, Garney’s painterly opening page depicting a biblical battle between a human Ben Grimm and a horde of demons is so different than the art he uses for his detective rendezvous in the rain or the nightmare sequences. Despite this, I’m still keenly aware that it’s the same artist throughout. It never feels disjointed and actually enhances the read immensely.

Additionally, Garney is very creative with his page layouts in this issue. He masterfully uses the layouts to control the pace and the mood of the story. Two standout layouts occur on subsequent pages: the first of which renders the rocky Thing forming from dust as he slowly sinks into the black abyss followed by a colorful bird’s-eye splash page where he spirals down into a small hole while demons howl at him from above.

Along with the page layouts, Garney puts some terrifying and strange imagery into this issue. Images like Ben’s flat, silently screaming face or Alicia’s featureless rock face are truly haunting. The recurring motif of the Thing crumbling and reforming is very effective throughout the issue. At one point, he crumbles down to just a rocky brow and a pair of blue eyes. The concept is stretched further as he transforms into his human form and back again, sometimes with unnerving results – like when you can still see a tuft of his old hair dangling over his craggy face.

I mentioned Ben’s blue eyes earlier, and I’d be remiss not to mention Matt Milla for his color work in this issue. The contrasting images that stick with me long after I finished this issue are D’Spayre’s terrifying, beady red eyes and, more strikingly, the Thing’s piercing blue peepers. The artistic choice to make Ben’s blue eyes so prominent in this issue proves to be a strong one. It’s an odd thing to harp on, but the way in which they’re colored throughout the issue does one of the best jobs I’ve seen of reminding the reader of Ben’s underlying humanity while paradoxically making the Thing feel unsettling and strange to look at. When colored this effectively, Ben’s blue eyes work as a great metaphor for the character himself. It’s a hard thing to explain, but it is clearly evident when reading the issue.

If I have one complaint with this issue, it’s that the plot itself is not very memorable. It’s a strange mishmash that’s never quite sure whether it wants to be a straightforward noir detective story as the title suggests or an unreal nightmare sequence where Ben Grimm battles his own inner sadness in the form of a Doctor Strange villain. I get the sense reading the issue that Gerry Duggan wanted to tell the dark, dreamy story but felt he needed to shoehorn in the noir aspects in order to satisfy some editorial constraint. In spite of this disjointed feeling, Duggan does an excellent job in efficiently telling his story. A done-in-one story like this is hard to pull off and Duggan does just that.

Despite an odd, out-of-place plot, the art is incredible and worth the cover price alone. This one-shot issue is excellent and a highly recommended read for those looking for a visual treat.