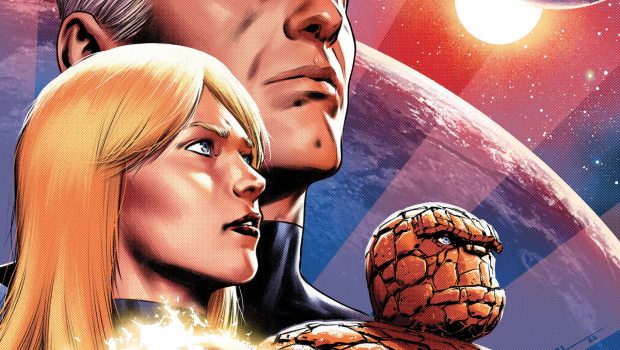 Summary: Dan Slott’s epic has drawn to a close. Now that this hullabaloo has finished, maybe we can finally have Reed find his sister.

The Story – The Reckoning War is over. Reed is surely dead, and the heroes are still in a dire situation.

Background – Dan Slott’s mini-epic has come to an end. The Watcher decides to play God before being taken off the board (perhaps permanently… for now), and Nick Fury returns.

Summary – Ben returns to Earth and is immediately greeted by Alicia and the kids. She realizes the others are not with him and asks him what has happened…

The Imperial Guard of the Shiar Empire, The Unparalleled, and Beta Ray Bill continue to fight the upgraded Galactus as Sky and her friends attempt to evacuate the rest of the Luminous (The Watcher’s race). They happen upon Nick Fury (the OG) who is guarding a still in pain Uatu. Sky begs him to come with them. Fury declines as Uatu continues to see everything his race has ever witnessed. EVER.

We then switch to Reed and his team as the after-effects of the Ultimate Nullifier are seen. Doom insists that they are still in trouble because of The Reckoning’s bomb but Sue doesn’t care. She cradles her husband’s body in her arms… and then he wakes up. Everybody is shocked (and even though we can’t see his face, I’m going to assume that Doom is to). They question how this could be possible and Reed realizes that the Ultimate Nullifier was Watcher technology. Because he was turned into a pseudo Watcher earlier in the story, he could use the Nullifier with no adverse effects. In fact, the Nullifier eradicated his Watcher side which in effect saved his life (because being a Watcher was killing him).

Doom says he always knew that this would be the end result and Johnny loses it. He goes after Doom but is stopped by the Cormorant. Doom reminds them all that they are still at ground zero for a universe destroying bomb and that they should get out of there. The Silver Surfer suddenly has a bout of inspiration and grabs the bomb and asks Johnny to follow him.

Reed realizes what they are doing, and Doom insists that Sue get them out of there at once. As they leave the planet via Sue’s force fields, The Surfer and Johnny fly over to upgraded Galactus and launch the bomb into his gullet.  Since Galactus has merged with the Asgardian Destroyer, the blast has been contained.

As the cosmic sentient’s that make up the universes thank The Surfer and Johnny for rescuing them, it comes to light that the Luminous have been permanently blinded, which while not true blindness, has brought their sight down to human levels.

The planet explodes as a fully formed and God-mode Uatu appears. He declares himself the one and ONLY Watcher.  Having absorbed all of the info the Luminous have ever seen, he has basically become God. He then starts undoing every action his race has taken, saying:

“Know that what I do now is not about interfering or bringing forth a reckoning. I take this action to rectify!”

Everybody is then transported to the very edge of existence where Uatu brings them to the great barrier. The barrier was constructed by his people to hide the fallout of the First Great War. Uatu waves his hand, and the barrier is no more. In fact, according to Doom, Uatu has reclaimed 9/10’s of the universe. What was once the Barrens has become the borderlands, which brings up endless possibilities:

“What was once The Barrens shall now be The Borderlands. Into New World’s! New magic! New science! New Gods! A canvas of infinite possibilities!”

Uatu then resurrects Jack of Hearts and the TVA has seen enough. While they still condemn She-Hulk for dooming the planet Raj-Lek, eight quadrillion worlds have been reclaimed, so they are pretty much cool with it.

Galactus is then separated (somehow) from the Asgardian Destroyer and asks The Silver Surfer to accompany him through the new part of the universe. According to Galactus, he still hungers, but that hunger is now for knowledge. The Surfer agrees to go with him, but not as a herald, simply as a companion. Galactus agrees and leaves. Uatu then sends everyone home, but before that happens, the Fantastic Four become the Fantastic Three.

Johnny is ecstatic because now that this craziness is over, Reed can use the cure he discovered while being a Watcher to cure him of his excess absorption of solar radiation. Unfortunately, that is not a possibility. When Reed was returned to normal, the knowledge of the cure left his mind entirely. Johnny loses it, tells them to all go to hell, and decides to go with Sky and her people for a cure. He wants nothing to do with the team anymore. They’ve let him down too much.

Doom and Cormorant part ways and the Cormorant is invited by the Shiar guard to help them protect the M’kraan Crystal. He agrees and we see that the crystal has been rebuilt and contains the still alive Ruin, Rapture, and Enmu (Uatu’s father) who will be stuck there for eternity.

The team returns home and Sue realizes that their kids are still stuck in Thought Space. They ask them to come home and Valeria states that Franklin doesn’t want to leave. Why should he? In Thought Space he can be as powerful as he wants. His parents tell him he is loved no matter how much power he has, and that Reed understands finally what it is like to lose such tremendous power. They tell him they will accept whatever his decision is. Franklin changes something about himself permanently and both kids return home. That thing Franklin changed? His hair is now permanently black.

But we are still not done! The Avengers arrive asking where they’ve been and before any stories can be told, a giant Uatu appears in the sky. In the craziest moment in the entire book, Uatu recreates the moon itself! He then leaves Nick Fury with his house and the job of once again protecting the universe, stating:

“Nick Fury, henceforth, you are once more the man on the wall, The Unseen, and humanity’s SHIELD.”

The story ends with the SHIELD emblem emblazoned on the surface of the moon.

Writing – Holy Christmas on a Goat’s cheese dipped cracker, that was a lot of story to get through. Let’s dissect this, shall we?

Final Thoughts? – Dan Slott’s epic has drawn to a close. Now that this hullabaloo has finished, maybe we can finally have Reed find his sister.