Summary: The first volume of Family Tree plants the seeds for an exciting series with top-notch action, creepy body-horror, yet at times feels a bit one-note.

Taking place in the mid-90s, Family Tree is a story about, you guessed it, family. Except this family is going through hard times as the youngest daughter has a growing rash on her arm that almost looks like tree bark. Single mother Loretta must begrudgingly join up with her father-in-law to try and stop this transformation, as well as fight off the villains who seem to be coming after them.

This is the latest tale from writer Jeff Lemire. As a fan of his series Sweet Tooth, of which a TV adaptation was just announced, I was very excited to jump into his new series. Teaming up with artist Phil Hester (Green Arrow) and featuring a very intriguing and creepy, body-horror based concept, this title has a lot to offer.

First of all, the characters are all well written. The book doesn’t dwell on character-based moments and tends to move quite quickly, but you get a great sense of who these people are and what their deal is right from their introductions. They aren’t one note, but the writing does rely on “their thing”, and in case of one stubborn character in particular, you might find their thing to get on your nerves after a while.

Having the grizzled father-in-law, or grandfather to the two younger characters, being a major player leads to some fun action sequences. Saying that though, at times it felt very familiar to the grizzled, older male character in Sweet Tooth. Even the character’s backstory is a bit familiar, which I won’t get into due to spoilers. He does have some excellent action moments though, and the violence in this title is a slick as it is bloody.

Which leads on to the art which is phenomenal. You spend a lot of this volume feeling like their mission is hopeless and the art does an excellent job of portraying that emotion in the world of the title, and also the faces of the characters. The violence is wonderfully chaotic and the moments of visceral body-horror and quite effective.

This volume collects the first four issues of the ongoing Image Comics series and works very well as a book coming in at under 100 pages. Reading these back to back doesn’t take much time at all as each chapter flows into the other very well. It almost feels like this is the better way to read this title, I don’t think reading this issue-to-issue would have enough content to go back to it month after month.

For the most part, this opening collection of Family Tree is set up, yet it’s a very well done set up that draws you right into this world. It’s certainly planted the seeds for an exciting series that I will continue to read as each volume comes out.

Family Tree, Volume 1: Sapling is out May 27th via Image Comics. 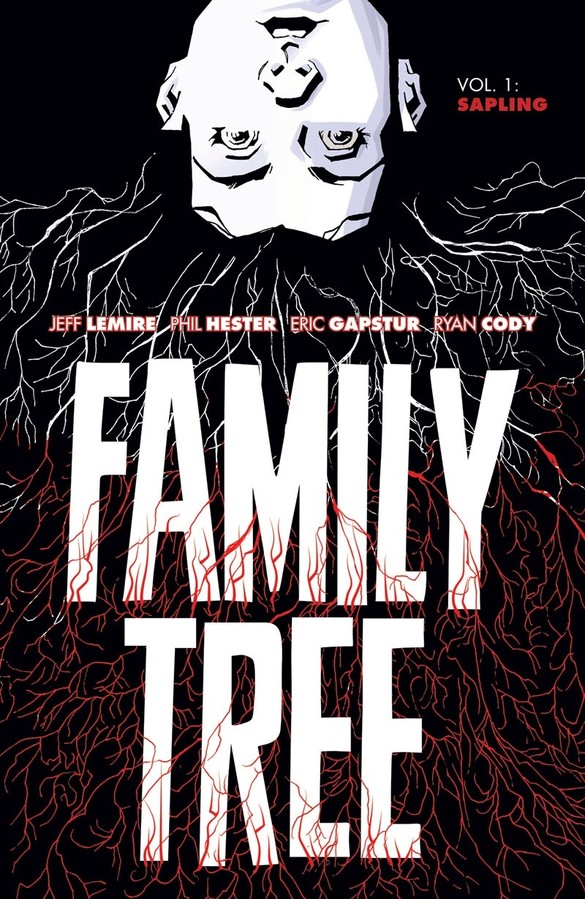