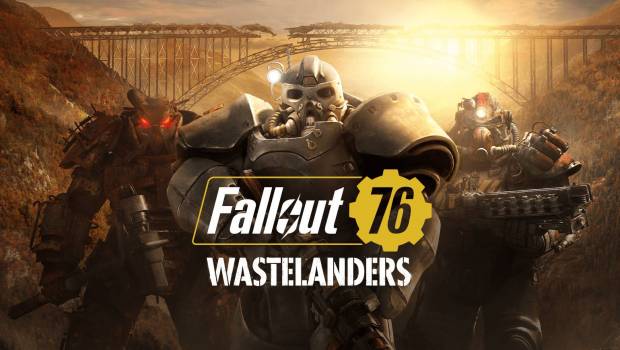 For me, Fallout has always been at its best not just exploring what comes after the nuclear apocalypse, but what people make of it.

Mutated monsters, scorched earth, unsettling social experiments, the fall of retro-futuristic 1950s America and the atompunk aesthetic – these are all really compelling elements that made the RPG franchise so beloved today. But most of the fun I had playing Fallout 2, Fallout 3 and Fallout: New Vegas came from interacting with the charismatic, crazy, cool, downtrodden and outright bizarre inhabitants of the North American wasteland. Learning their stories, picking a side, and carving an (oftentimes) bloody path in pursuit of their unique views for the future.

Fallout 76: Wastelanders is the latest free content expansion which admirably takes on the biggest criticism the game has endured since its rocky launch in 2018 by adding hundreds of human NPCs all throughout Appalachia, accompanying compelling new world content that, for the most part, smartly intertwines with and enhances existing quests with more role-playing options than before.

Fallout 76 removed what made Fallout so fun, at least for me, when it declared all human survivors you’d see in the West Virginia wasteland would only be other real players. Its multiplayer focus is interesting, but the world felt so empty. Launch-day quests involved chasing ghosts of the long dead, listening to audio logs or reading diaries of characters that were hard to truly care about when you know you’d never meet anyone. Unless you count zany robots or decaying corpses.

Playing through Wastelanders for over 20 hours, it’s clear the update offers some of the best story content the series has had in a long time. However, some clunky missteps in how it handles multiplayer mechanics limits its potential to be enjoyed with friends versus playing solo.

The introduction into the new quests is better than anything the base game had at launch. New survivors have settled in the Appalachia area one year after the opening of Vault 76, and you’re quickly roped into a treasure hunting quest by Duchess, the owner of a new bar called The Wayward, full of friendly and entertaining faces like ghoul-for-hire Mordecai “Mort” McCoy, real lady robot Polly. What follows is an enjoyable chase, filled with complications, to see if the rumours of hidden caches are all they live up to be – with dialogue choices reminiscent of entries past. 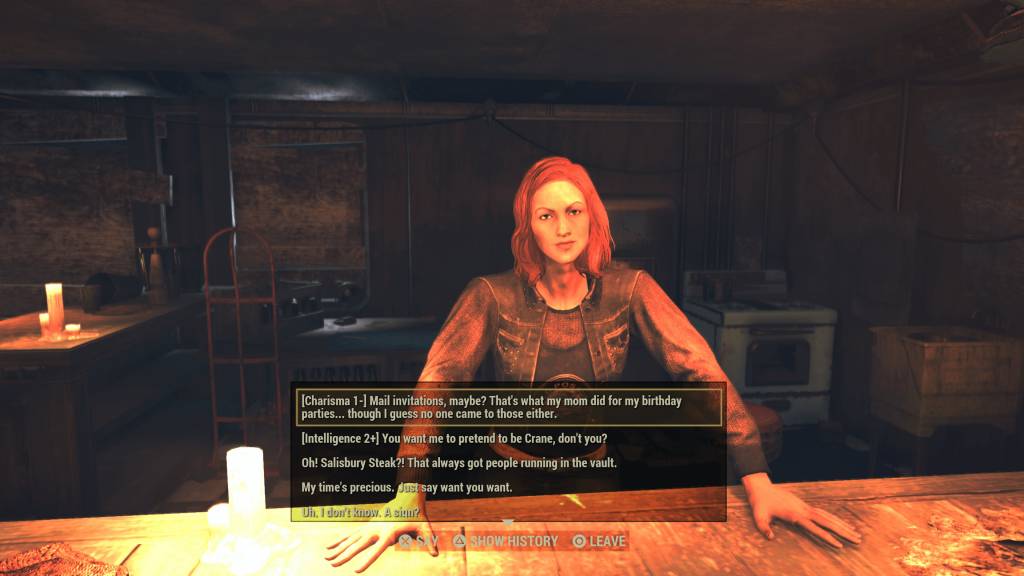 Even while scavenging, there’s a bunch of interesting new random NPCs to run into, from friendly Settlers grateful for your help to bloody thirsty raiders like the Blood Eagles who offer a welcome new human challenge alongside the inhuman Ghouls and Scorched (of which there apparently is now a new cure to combat the plague) and other radiated wasteland monsters like the new Cult of the Mothman weirdos, Floaters and the Wendigo Colossus. There’s even two new unique companions like Sofia Daguerre, an astronaut who fell back to Earth after years of sleep in suspended animation, with their own fun questlines and choices offering unique weapons as rewards. Both can be added as allies, be romanced, and live at your customisable C.A.M.P. – but can’t be taken out on missions.

Now, is the writing as good as past games? Not exactly. But the new stories are interesting enough to build some actual motivation to explore Appalachia. I particularly enjoyed an early Wastelanders quest where you have to source a new body for the headless robot Polly and have a particularly amusing conversation with a Mr. Handy who has no idea the world’s ended and that the orders reserving his spare robot products aren’t exactly going to be fulfilled; you can settle for a robot body he offers that’s not quite to Polly’s instructions, or go the extra mile with a little clever sneaking and hacking to get the ideal result, and enjoy differing dialogue depending on your choice. And the multiple dialogue choices, harkening back to the older games by using your S.P.E.C.I.A.L. stats to dictate what you can and can’t say successfully (with some amusing options to choose when you don’t have enough points), also injects some much needed personality and connection back into the shoot and loot formula.

It’s a good thing humans are back to make the reasons for shooting everyone and everything more interesting, because even after so many updates, the gunplay and VATs mechanics in Fallout 76 are definitely off compared to Fallout 4. From aiming to shooting, everything feels a lot more floaty, and with enemies constantly getting stuck in the environment or reacting to body shots with hard-to-ignore delays, it’s hard to get fully immersed in the moment. Still, it can be fun to stalk down some Blood Eagle raiders while Super Mutants roll into the party by random chance, and the melee combat is at least punchy enough to feel, at a base level, satisfying. 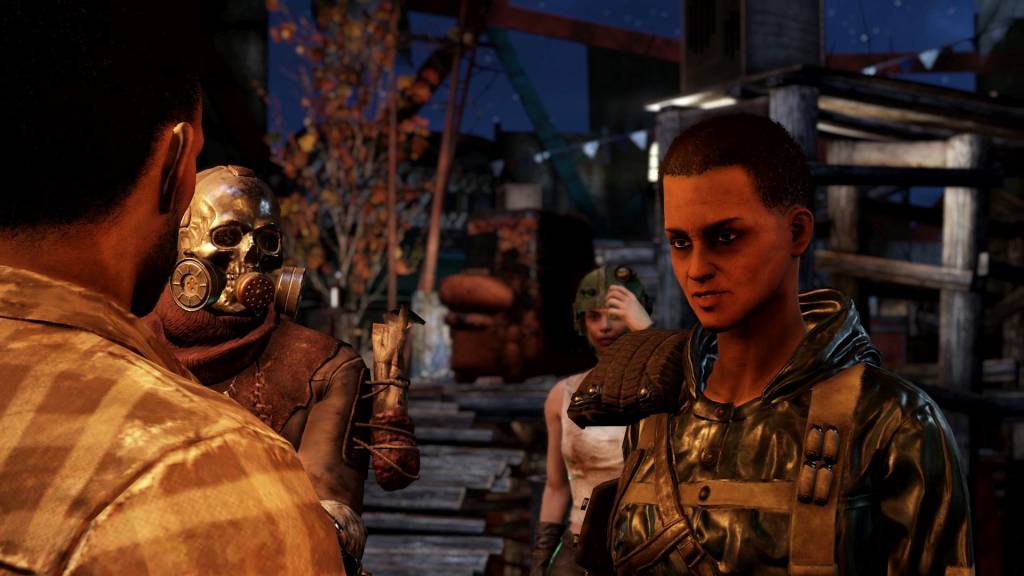 It’s a shame weapon and armour crafting still feels more annoying and tedious than fun to manage. Constructing and customising your personal C.A.M.P. is fun, but having to constantly manage tons of useless low-level guns and equipment that break so quickly there’s no point in maintaining them over new loot made progression feel a lot less rewarding than Fallout 4.

Quest progression with Wastelanders installed generally feels like more of a traditional single-player Fallout adventure, while the best of 76’s multiplayer-centric elements – base building, environmental story-telling, public events – are uplifted with the addition of the new NPC survivors, actual role-playing choices and structured storytelling. Which is why having to reach level 20 to farm experience points before you’re able to continue much of the new story’s content, which involves meeting Vault 76’s enigmatic Overseer in the flesh, even more jarring.

Even as someone who didn’t get too deep into Fallout 76 at its launch, however, it’s easy to see the quality difference between the old main questline and the new content, even with some of the old areas receiving new NPCs to flesh out your exploration a bit more – the Responders base, for example, has two (living!) recruits doing the same tests to join the faction and the Fire Breathers that you’re doing. Most of the story is told through terminal entries, strangely convenient audio logs and detached robots – the fact you’re trying to join a long-dead volunteer organisation based on recordings is both impersonal and tedious. The voice acting is okay, but why am I doing a physical obstacle course to join a dead group? Chasing ghosts versus helping living people is just not as fun, guys. 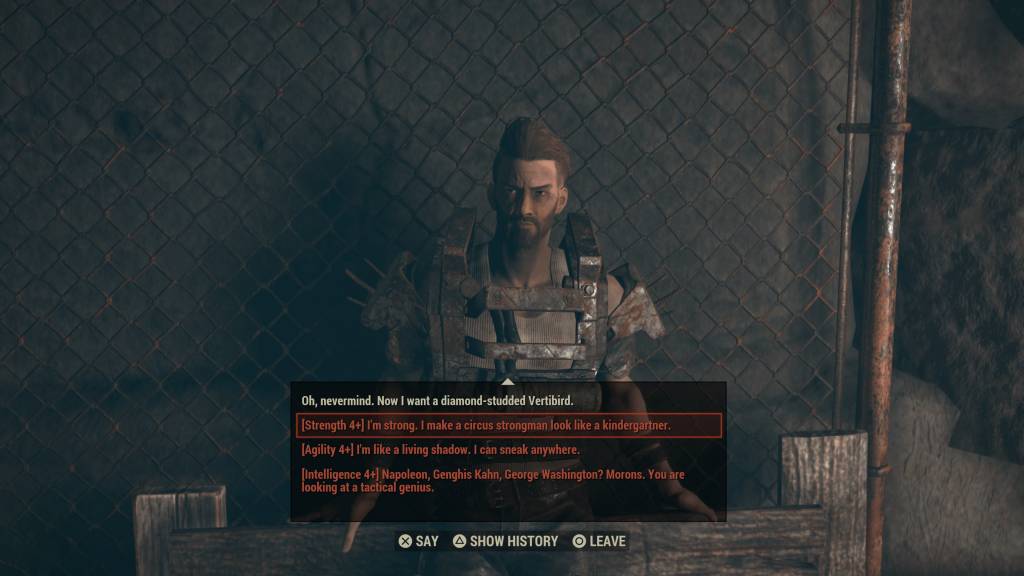 With no dialogue or meaningful choices past travelling to the next waypoint to kill enemies and a lot of backtracking in these older launch quests, I almost didn’t make it through the dozen or so hours required to get to level 20 and get to the new content, but I’m glad I pushed on. The Wayward’s colorful inhabitants alongside the new Settlers and Raiders factions and their respective camps, Foundation and the Crater, are ten times more interesting to interact with than rambling audio logs. You can even join the Raiders, depending on your choices, which is great for role-playing. The Apalachia map itself is impressively hand-crafted, too, so even when the fetch quests failed to drive me forward, the little details did.

If you’re into playing those fetch-style or repeatable quests with friends, though, Wastelanders still has your party covered. I must admit, I enjoyed playing the new Riding Shotgun public event, which has you protect merchants from Blue Ridge Caravan from the Blood Eagles through a tunnel, and the daily quests you get from Raiders and Settlers adds some easy XP and additional combat opportunities whenever you need a breather from the main stories.

So – the big bad parts. Playing these new story-driven quests with friends in Fallout 76 is kind of annoying. It was always going to be difficult, given the pseudo-MMO gameplay, to smoothly implement traditional role-playing quests in a multiplayer-focused title, but the compromise made here doesn’t quite work. You can enter interiors with major quests as a group, effectively giving all agency to one player to make all the dialogue choices and interactions (you can still listen to the convo, but it’s not the same) or as a solo instance where you can complete it alone and regroup later. The former option only awards progress to the party leader, so the latter is the only real way. But playing together is Fallout 76’s unique angle, so it’s just a little disappointing. 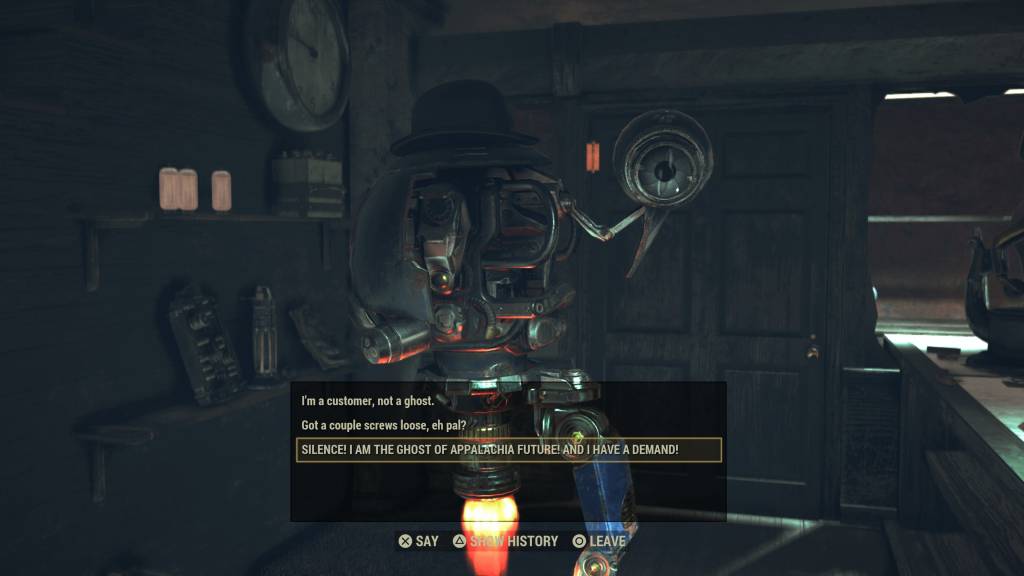 As fun as it is to have dialogue trees and actual living characters to talk to, NPCs can also feel a little more lifeless than past games. A lot of the Settlers at Foundation appear quite idle, and unlike past games, stealing items or hurting others isn’t really recognised here. Weird glitches also still persist despite the major update; I’ve had NPCs straight up disappear on me while talking, and certain conversation triggers did not occur until I did a hard restart. If you were hoping for a completely bug-free new relaunch, Wastelanders can’t quite promise that.

But my, does the free update do wonders for the visuals. At least, for the environments; lighting systems were overhauled and the additional detail while exploring dank dungeons and long-ruined buildings is impressive. The same can’t be said for the NPCs, who all suffer a bit of potato face that’s inherent to Bethesda’s game engine, though at least the new armour customisation choices look colourful and cool is the brighter lighting and longer daytime cycles.

Playing on PlayStation 4 Pro, performance of Fallout 76 was generally stable on public servers, but I found the smoothest experience playing on my own private server with invited friends, courtesy of a provided Fallout 1st subscription. The other perks that come with the premium program – 1,650 Atoms monthly to spend on customisation items in the Atomic Shop, a scrapbox for unlimited storage for crafting materials, and a Survival Tent you can place anywhere – are neat and handy, but unless you’re planning to make Fallout 76 your main game – or love the NCR Ranger Armour that comes with it – the annual membership option is still a little too pricey for what you get at this time. 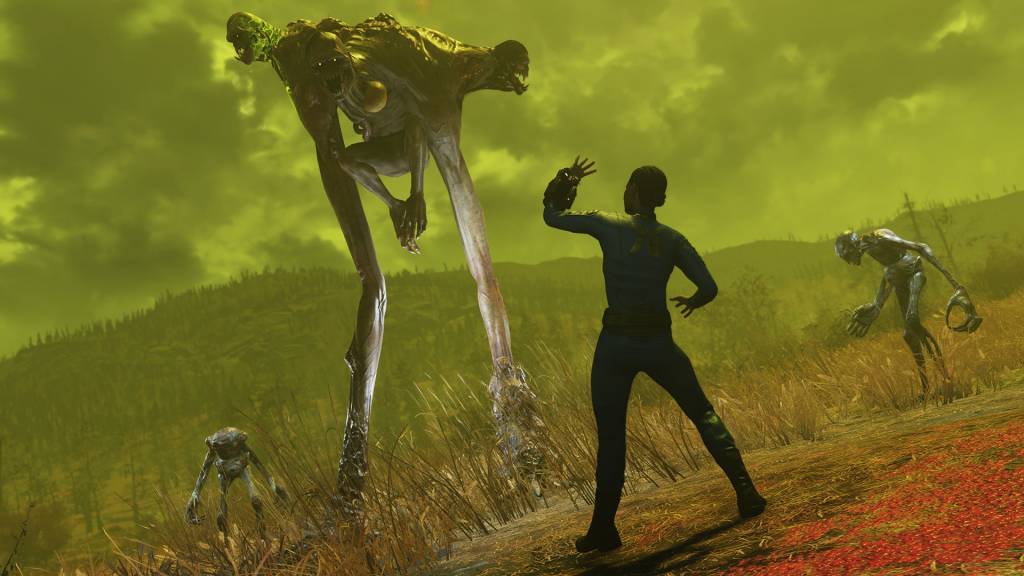 Fallout 76: Wastelanders is a generous free update that introduces a substantial amount of great new story quests, characters, loot and activities more than worth returning for.

The 60+ hours worth of new and refreshed content is definitely a step in the right direction after the base game’s troubled launch and enhances the existing shoot and loop formula well. While some technical problems persist, the way the team has handled the expansion has given much needed life into the wasteland that can only be further improved upon with subsequent updates.

The bulk of Wastelanders’ new story-centric quests are definitely better played solo, but the new events, daily quests and discoverables that come with the update are equally as fun to experience with friends old and new, and signify a brave new direction for the online title going forward. 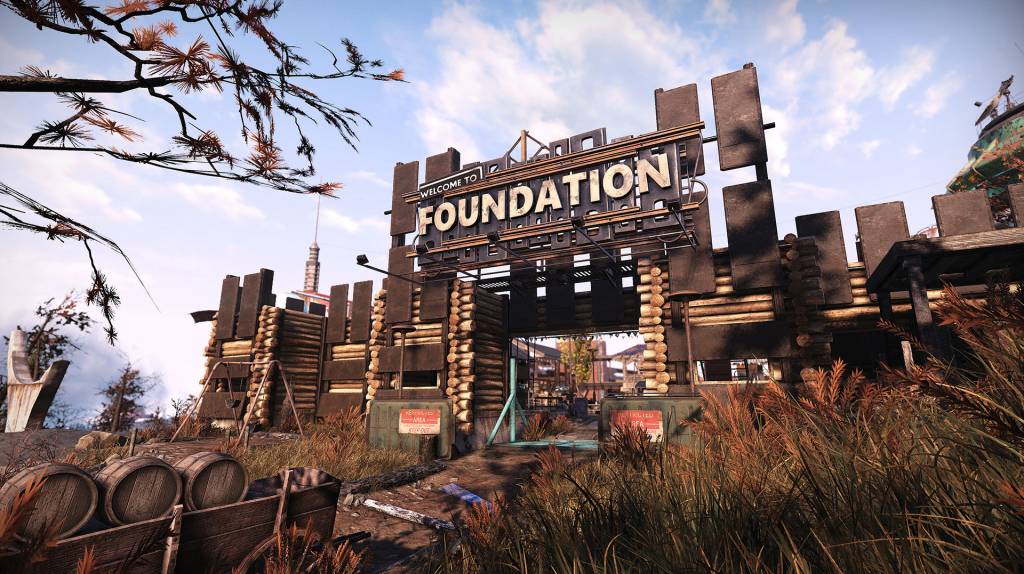