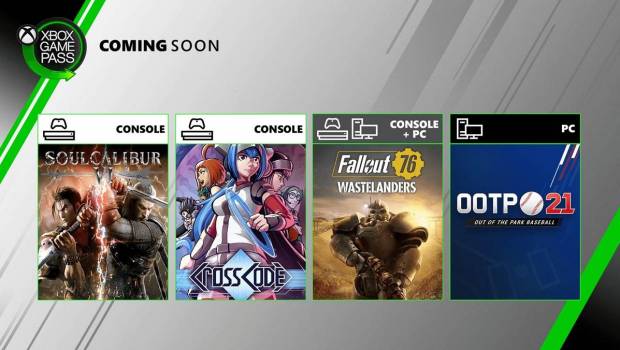 Welcome back friends, we have more games, more DLC, and now some tips for playing. No matter how you play, make sure your wireless gaming mouse is fully charged, controller 2 is at hand if someone wants to get in a round, and your phone is nearby to remote download the next game (using our handy Xbox Game Pass mobile app) if you’re in the middle of a match. Some more before we jump in:

The 21st version of the award-winning baseball strategy franchise delivers the newest features and improvements in series history! It features unprecedented depth and customization, brand-new guided experiences for newcomers and veterans, authenticity licensed by MLB and the MLBPA, and a bounty of offline and online experiences found nowhere else.

Prepare to clash in the retold Stage of History. Soulcalibur VI is the premier weapons-based fighter, head-to-head fighting series with a massive roster of iconic characters and special guest fighters such as Geralt from The Witcher. The heroic 3D battles transpire in a beautiful and fluid world, and now features all-new battle mechanics and characters. Pick your warrior and experience Soulcalibur’s untold history on Xbox One.

If you are looking for a game with more than 30 Boss fights, over 120 enemy types, huge dungeons filled up with countless puzzles, combat skills and a ton of quests supported by a handmade music tracks with plenty of playtime, well, in that case you are looking for CrossCode! A retro action RPG set in the distant future in the veins of Secret of Mana and Zelda. Look forward to butter-smooth physics, a fast-paced combat system, engaging puzzle mechanics, all served with a gripping sci-fi story.

Bethesda Game Studios, the award-winning creators of Skyrim and Fallout 4, welcome you to Fallout 76, the online multiplayer role-playing game. Work together, or not, to survive. Under the threat of nuclear annihilation, you’ll experience the largest, most dynamic world ever created in the legendary Fallout universe.

Check out the free update that includes the Lost Temple dungeon, some new items, and a few game balancing changes. Plus, Xbox Game Pass members get up to 10% off to purchase the Jungle Awakens DLC! Only you can fight back against the snarling overgrowth to free this distant jungle from a mysterious power. The path is perilous – new foes and dangerous puzzles wait in the shade. Find new armor, weapons, and artifacts as you seek to uproot the source of the wicked corruption: the Jungle Abomination.

From epic adventures to bizarre encounters and eternal friendships made, it’s time to hear the “The Greatest Tales Never Told.” Tell us your legendary tale using #SoTTalesContest on Instagram, Twitter and YouTube for your chance to win treasures and be immortalized in the Sea of Thieves lore. Learn more at https://www.seaofthieves.com/Greatest-Tales-Never-Told

Both the Plunder Pack and the Green Zone are coming to all State of Decay 2 players. For those who aspire to see Zombies vs. Pirates, Undead Labs collaborated with their friends at Rare to expand our buccaneering options with the new Plunder Pack! This pack adds Sea of Thieves-themed weapons, outfits, hats, and one seriously salty vehicle to the game. Players looking to ease into the post-apocalyptic experience, we are happy to announce the Green Zone. The Green Zone is a more relaxed, accessible apocalypse, designed for those who’d like to explore what’s possible in State of Decay 2 without enduring quite so much stress.

A new month, a new set of Xbox Game Pass Ultimate Perks coming your way! Starting today, go grab your Phantasy Star Online 2 July Member Monthly Bonus Pack including Triboosts, Casino Coin Passes, and more (only available in US and Canada). Additionally, this is your last chance to claim your Smite Starter Pass Perk (available in all markets except Taiwan, South Korea, and Japan) if you haven’t already, as it will leave the Perks gallery on July 13. Stay tuned for even more Perks announcements later this month!

If you follow us on Twitter, you might have caught our ode to games leaving soon. Sing along! Sweet tunes aside, don’t forget you can use your membership discount to get these games for up to 20% off while they are still in our library.

If you followed my gaming tips and you didn’t scare your roommates off with defending your fort and emerging for snacks after possibly defeating Mitsurugi, let them know they can get in on the fun by getting their first month of Xbox Game Pass Ultimate for $1. Tag us on Twitter or Instagram with your best gaming fort / base! Cheers!