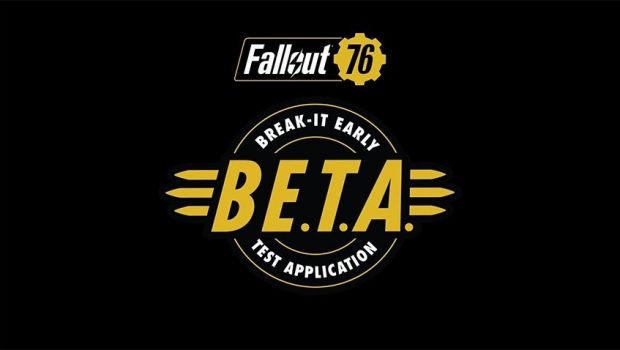 When I first learnt about Fallout 76 I was hesitant. I like my games to be single player… it’s not that I don’t have a good enough internet connection, it’s arguably more that I’m antisocial. Or more correctly… I don’t like other people running around and influencing how I play my games. Having said that, I did have some experience with Elder Scrolls online and figured Fallout 76 would likely follow that game style in which you can certainly go on quests with fellow human players, but you could do a fantastic amount of quests on your own. Having now spent time in the Fallout 76 wasteland I can confirm that indeed the game can just as easily be played solo as multiplayer… though did have some experience with the latter… I was in my element engaging with the game in the former style. 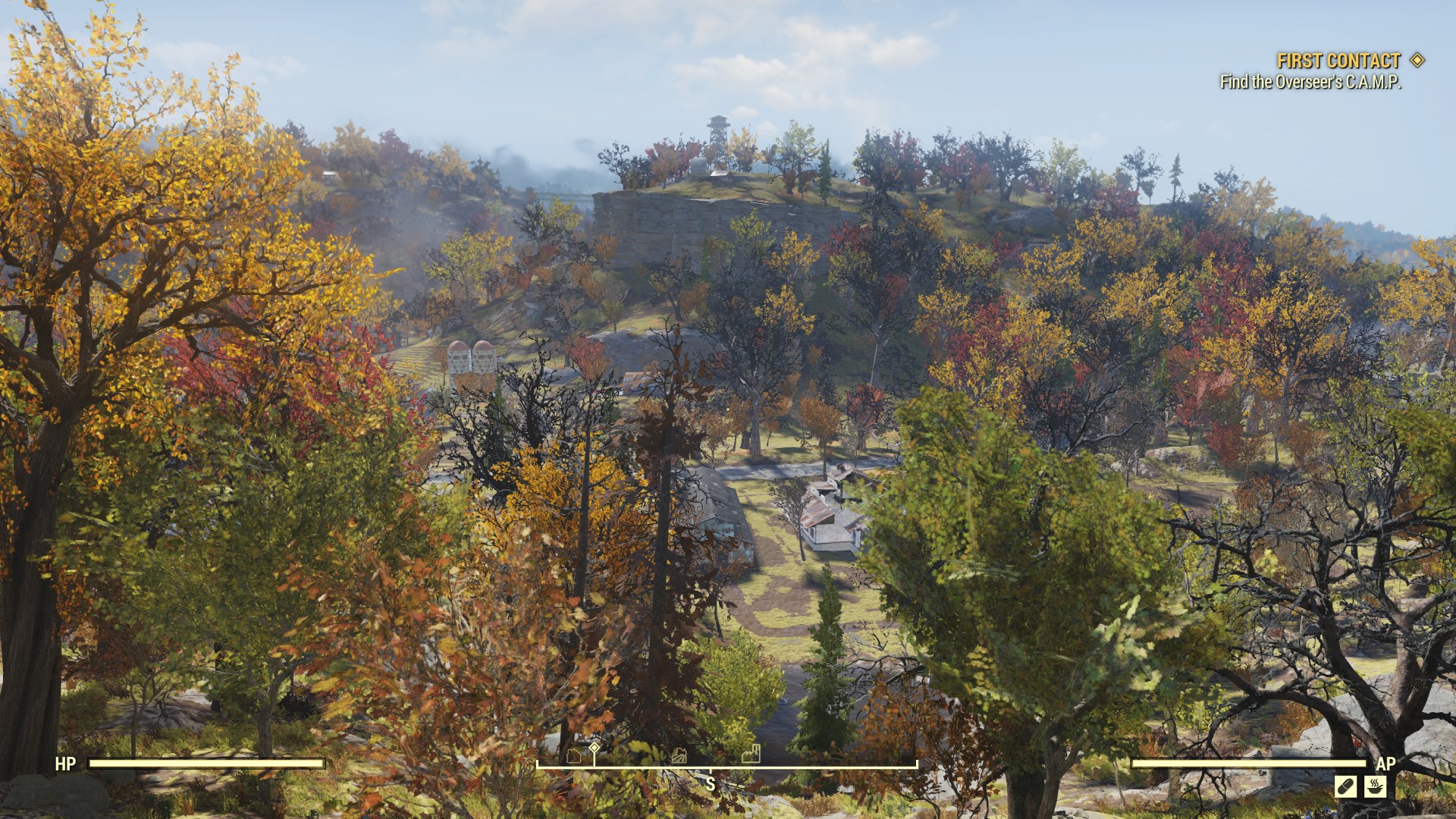 But I’m possibly getting ahead of myself. I’m a massive Fallout fan so perhaps you will need to take this first impression with that in mind. But while we’re at it, if people don’t realise that a BETA is something that is expected to have issues then they don’t understand the term and at this point in time I’d even say if people are picking up a game containing a massive interactive game world, whether online or not, and expecting it to run flawlessly then they are perhaps a little overly optimistic. But with that in mind… I didn’t really encounter many issues and those that I did were not game ending… seeing a mole rat sitting motionless in front of you, clearly being considered alive but not moving is not a big issue… the mole rat is no longer a threat… but you can certainly keep playing. 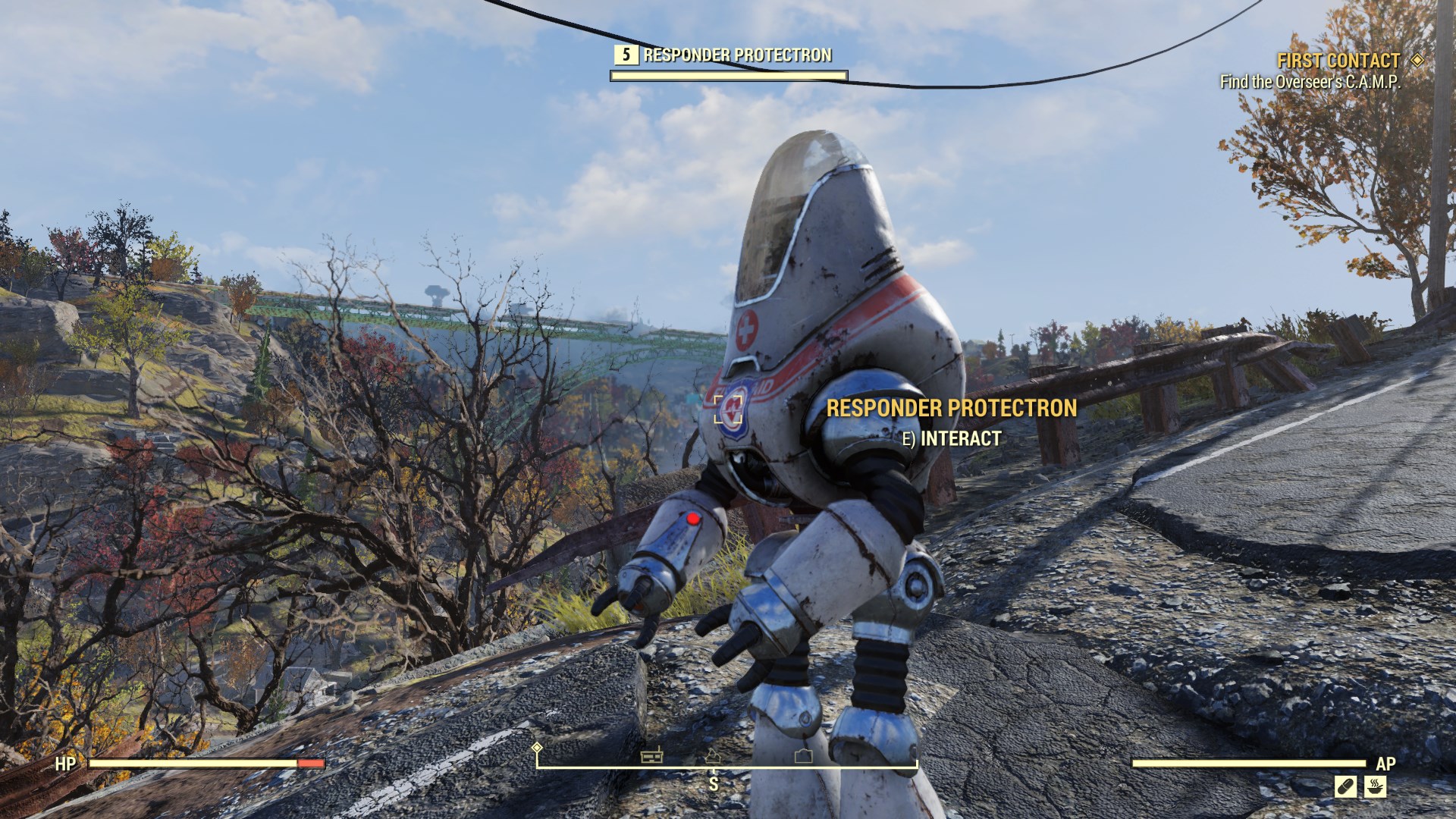 One of the first things you will notice about Fallout 76 (certainly after you’ve left the vault) is how stunning it is. Lighting effects provide for some gorgeous sunsets over the amazing lush landscape… oh yeah… that’s another big difference… the landscape is quite lush, plant matter isn’t reduced to just some hardy crops but you can see actual forests and colours sprouting all around. But don’t be fooled… the world isn’t totally untouched… there are signs of a great devastation in amongst the vegetation. The familiar derelict cars and houses, dead bodies and signs of battles being fought before you arrived. The world is clearly lived in and signs of animal life pop up all over (the familiar Brahmin even have a nice little focus in some of the notes you can find in which people are starting to find out just what this post nuclear world is capable of producing.). 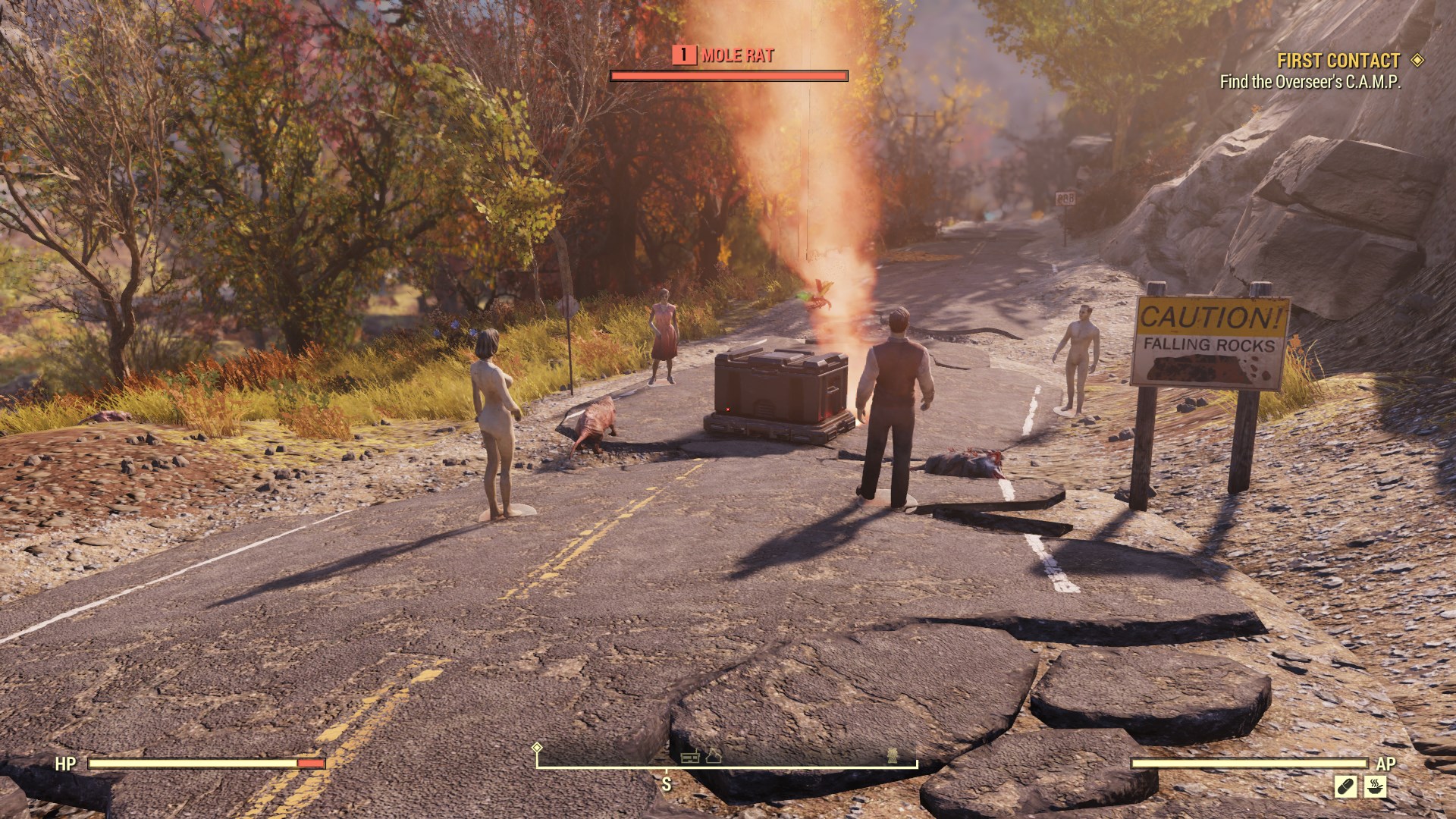 VATS was always going to be interesting, whilst in the standard games VATS typically either stops time or at least slows it to a crawl. In Fallout 76 VATS simply highlights the targeted portion of the body of your enemy as time continues… it’s actually a decent way to incorporate it… you don’t have the time to carefully go through which area might be best to hit… and accuracy will vary as your target moves around possible obstructions… but it does still offer benefits and the ability to inflict area specific damage more precisely. 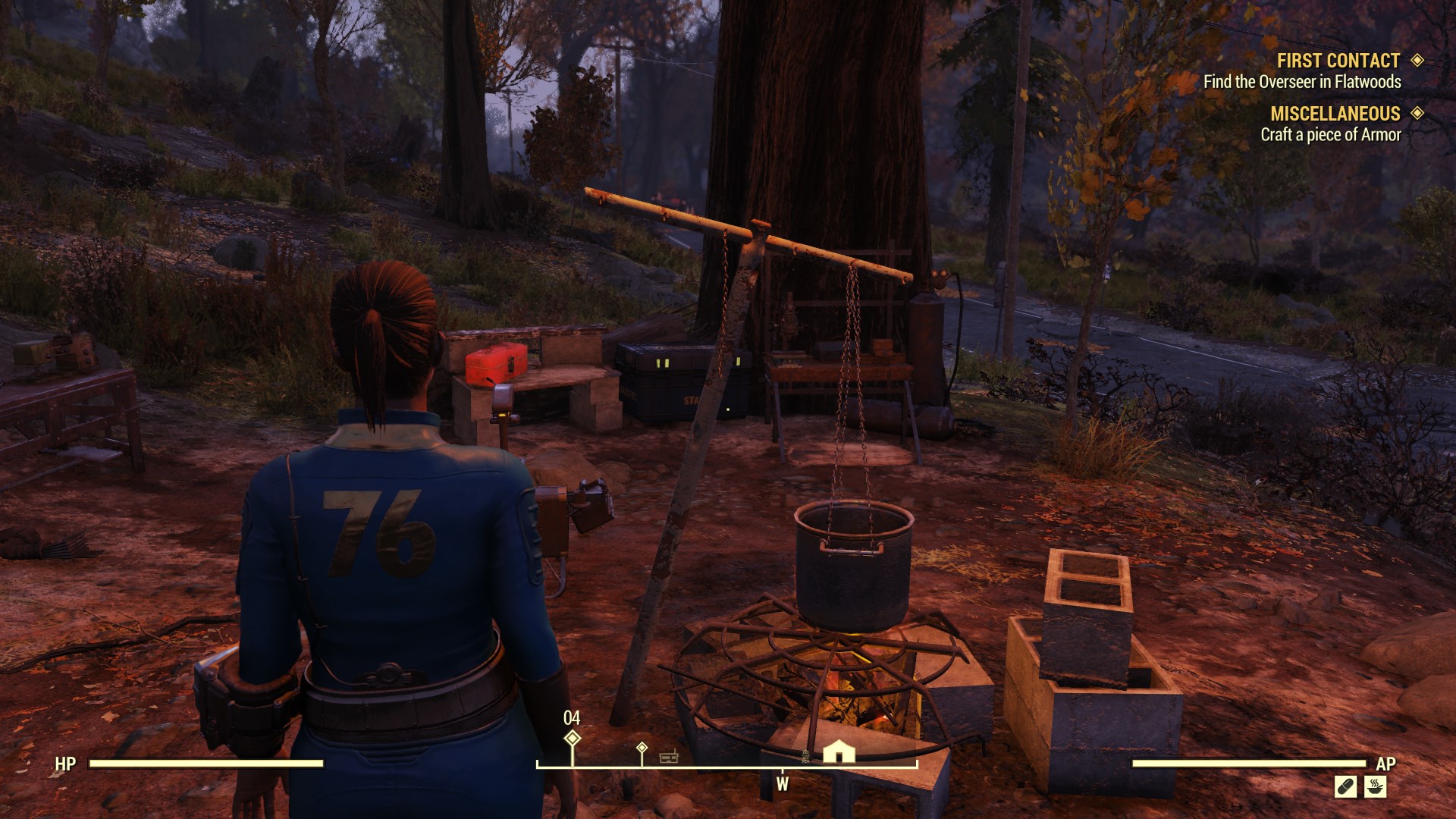 Character development has a familiar tone but is also different. You now have trading cards to enhance certain aspects (which is kind of fun to watch a pack be opened and the stick of gum seemingly thrown away). The key character elements are there of Strength, Agility, Dexterity etc… but for each of these you get enhancements such as the familiar pack rack and so on that are now applied as cards which can be combined or replaced by other cards. It takes a little getting used to but it’s essentially just a new front end on the old system. 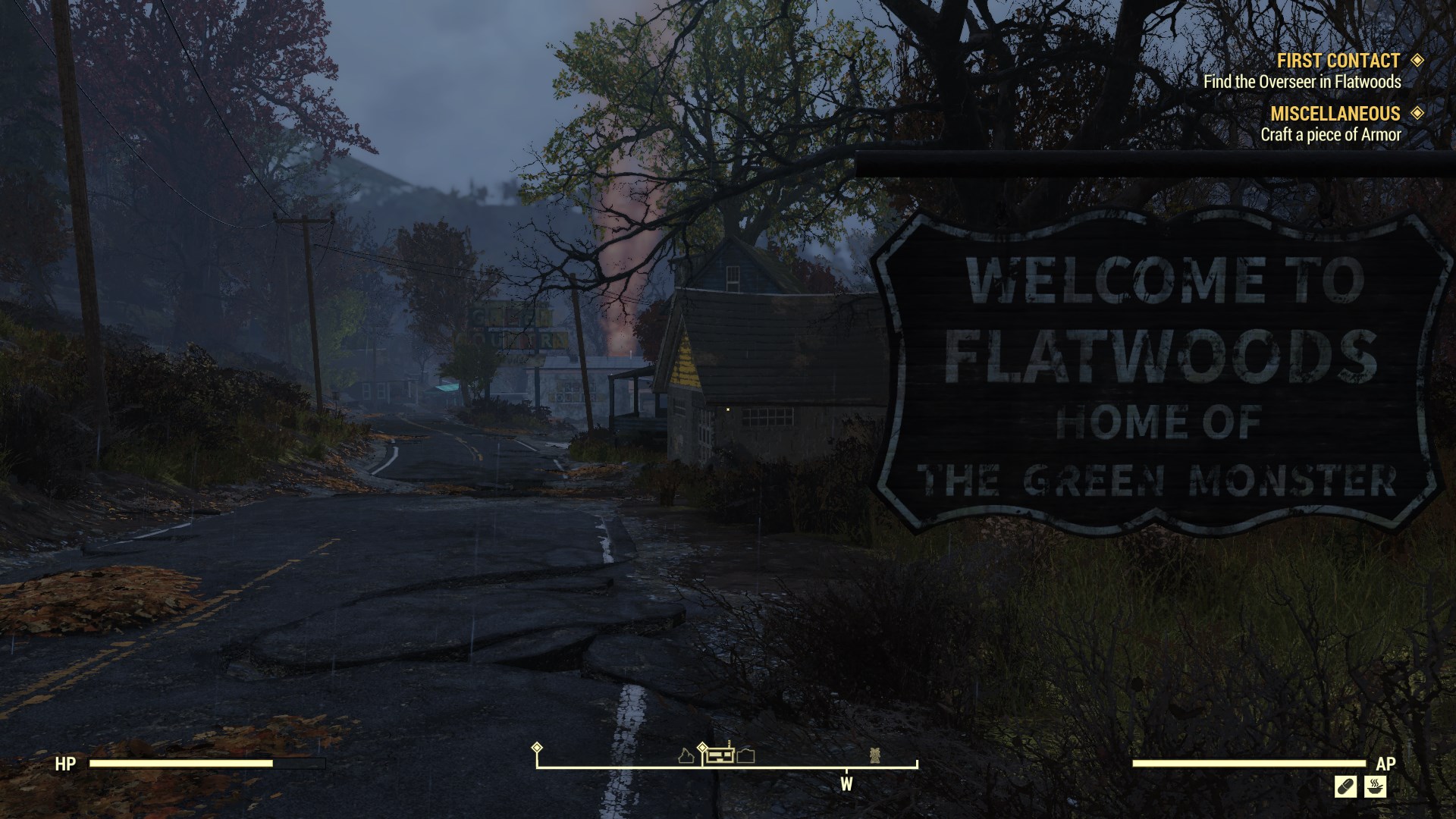 Base building revolves around CAMP which is essentially your way of taking your mobile work station with you. You can find a nice spot away from trouble and pull out your CAMP kit and set yourself up… why not find a place with a nice view, or perhaps with a ready supply of water? It’s nice to not feel so limited in where you can set up, I didn’t really get much experience with it (BETA access times were limited in an effort to stress the servers as much as possible) but it seems to work well as a location to get yourself together and prepare new recipes, armour and weapons before heading out again. 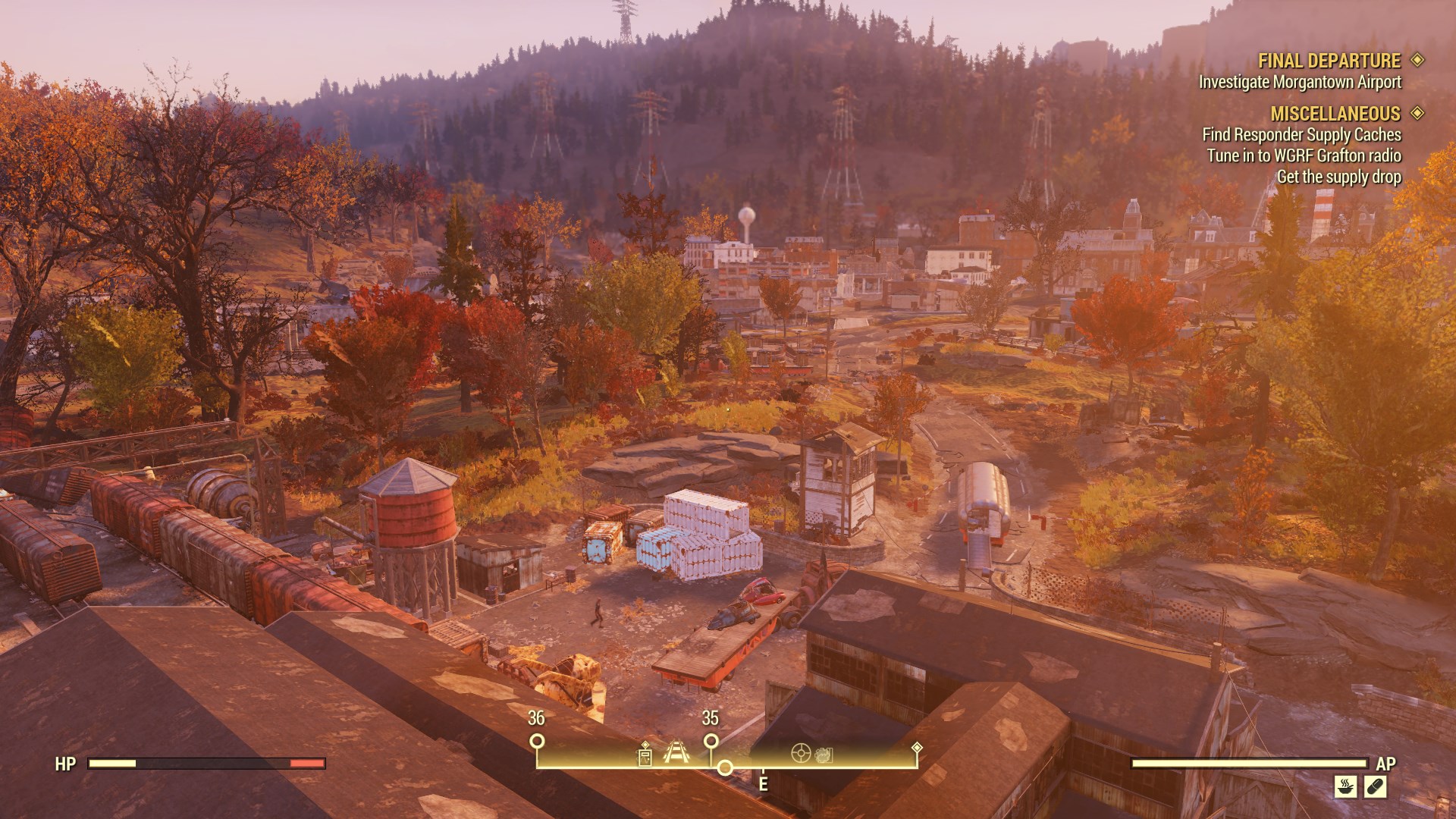 My one main experience with multiplayer (other than hearing a lot of audio chatter whilst exploring the abandoned airbase) was a PVP encounter… if I’m not mistaken in my reading of how these work, essentially a human player can attack another human player… some damage will be applied but until the second person hits back (ie shows that they are open to PVP action) the damage is limited. I foolishly figured I’d allow it to happen (it was only about 2 minutes before a server shut down and I was curious). Unfortunately I had just been fighting some reasonably tough creatures so I wasn’t in the best shape to engage in more combat and met a rather quick end. 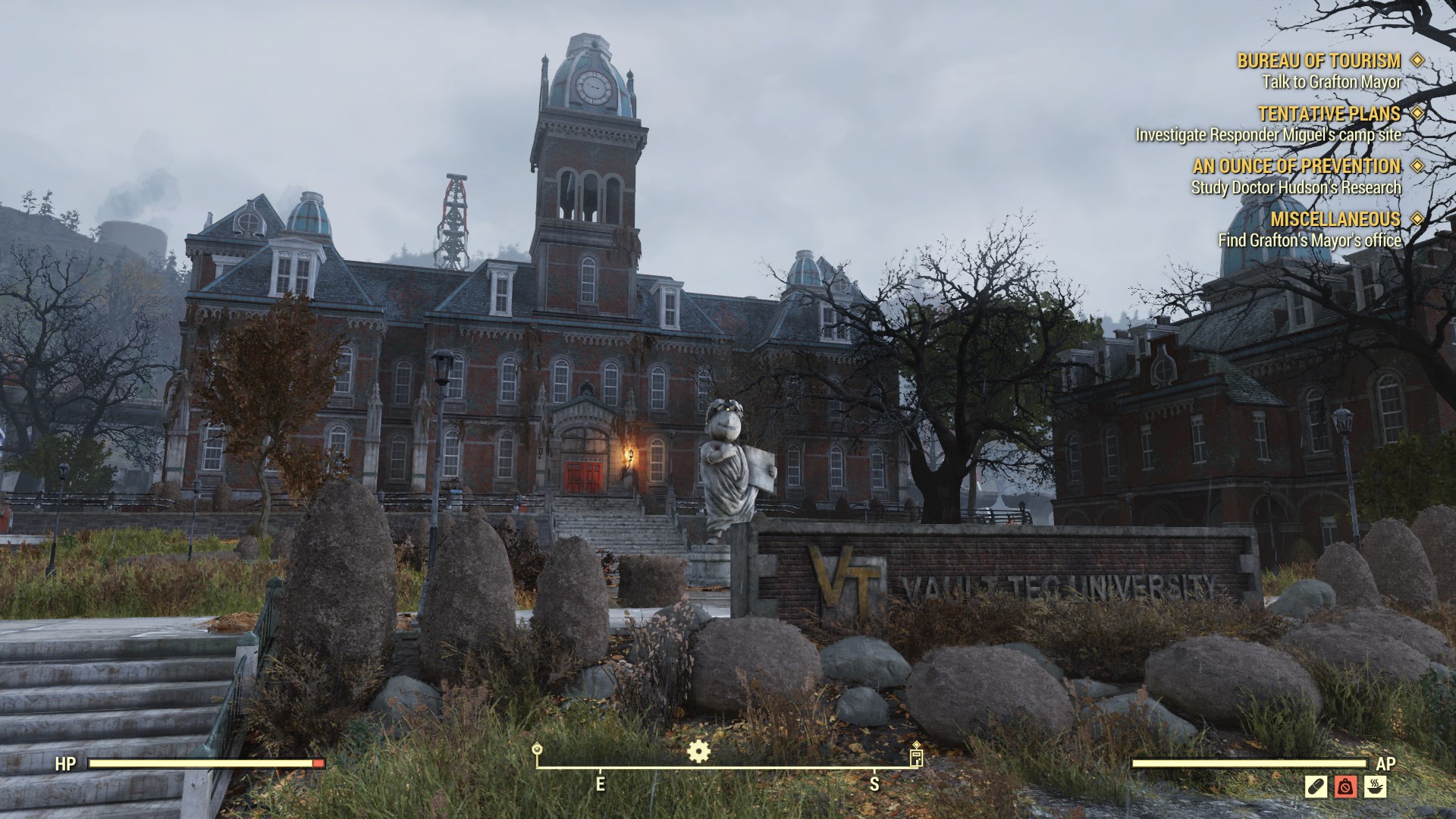 Speaking of dying, you can select where you respawn (within reason)… but more usefully, you can return to where you were killed and pick up the loot you dropped. It’s a nice way of allowing you to get back what you lost whilst also potentially being a challenge to do so (if enemies haven’t been cleared.) 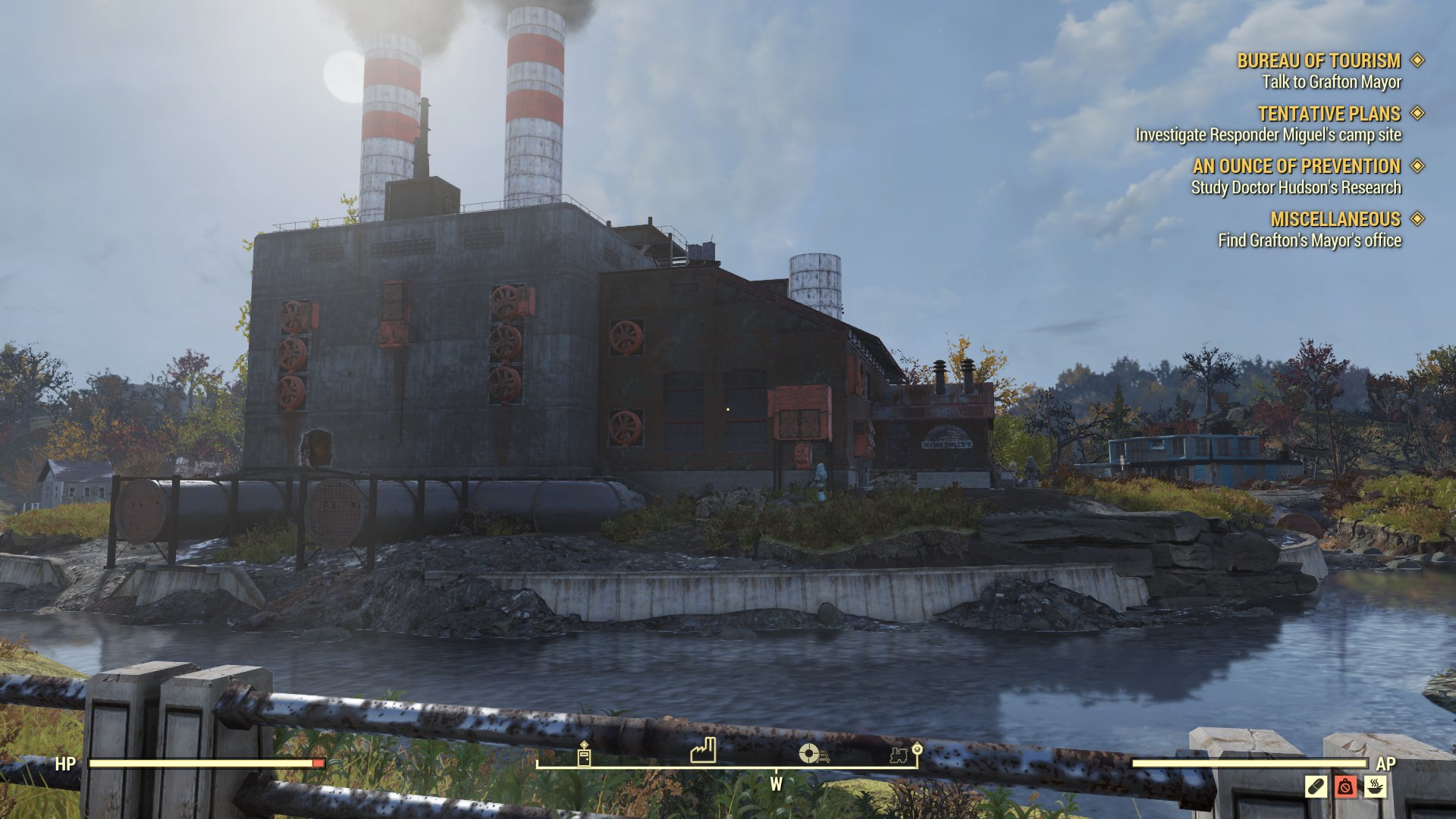 The main thing I learnt from my time in the BETA is that I want more! The wasteland stretches out before you and it hasn’t lost a smidge of the amazing depth that the previous games had. If you are a fan of the single player games don’t worry about the online tag… it is perfectly playable as a single player experience. Conversely if you’ve been waiting patiently to finally gather a band of merry wasteland warriors and cut your path through the world… you can now do that too. I’ve only scratched the surface but I’m keen to grab my power armour and explore the length and breadth of this stunning landscape!