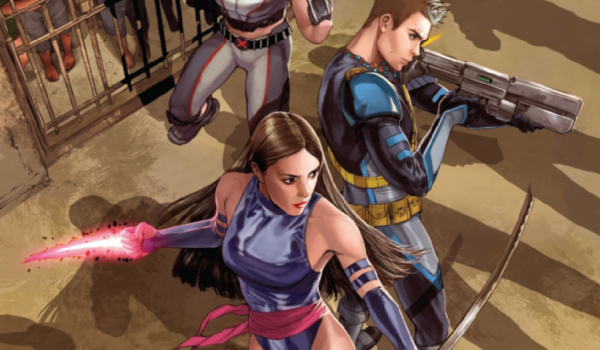 Summary: Well, they can't all be good. This sure isn't.

The Story: I… I couldn’t even really tell you.

Summary: I’ll try to break this down as easily as I can:

Kwannon, back in her own body after decades is trying to figure out exactly who she is. As far as she is concerned, she’s a killer. We open with a scene from her past in which she is working for the Yakuza (at least I think it’s the Yakuza. She keeps referring to it as “The Clan”). She kills some guy who is looking to disappear and his guards.

Then we’re back on Krakoa where she is approached by X-23. Apparently, X-23 has totally previously unknown demons in her and she really is just angry all the time and she wants Psylocke (which is now Kwannon’s codename instead of Betsy’s) to mentor her. Kwannon kind of gives her a yes and walks away. Straight into Kid Cable.

Kid Cable explains that San Mateus (an island nation) has slave labor and the innocent people are getting destroyed. Kid Cable wants to destroy the cartel. This is such a great injustice that Cable is just enraged at the very thought of it. She denies his request and after a melodramatic moment with Dazzler, Kwannon walks away.

In the only interesting moment of the book, we get another flashback. Kwannon takes the wife of the guy from the first flashback hostage. Instead of killing her though, she smuggles her out of Japan for the simple reason that Kwannon had used her powers to touch his mind, and she therefore felt how much he loved his wife. The woman and the couple’s unborn baby are still killed later.

After consulting with none other than Mister Sinister, she gets permission to leave. She then gets Cable and X-23 and they invade San Mateus. The issue ends with them confronted by what looks like one of those robots from the original Jonny Quest.

This book is overly bleak. It’s so bleak that for a bit I thought I was reading a parody of dark and gritty stories. The colors are all desaturated except for the occasional flashes of purple that come from Kwannon’s powers. The characterization is the books largest problem however.

First, there is Laura (X-23). If this had been much closer to the characters debut it would have been great. By this point however, we have had 16 years of stories with her beating her demons. The last couple of X-23 runs have pretty much demolished those demons. This all just seems like a GIANT step back.

Then there is Kid Cable. Now, technically we know how Cable is SUPPOSED to grow up, but this is still kind of a brand new character. The problem with this is he hasn’t gone through all the darkness and grief that Old Cable has. He was a straight up hero when he rescued his father and in his own book. The sudden shift in character is jarring.

This book gets that 1 star because of that one flashback. Other than that, the book is overly grim, with depressing colors and strange characterization.  Hickman’s Dawn of X is supposed to be a bright new morning for the mutant race. This feels like it’s from the depressing mid-2000’s. The line has its first dud.