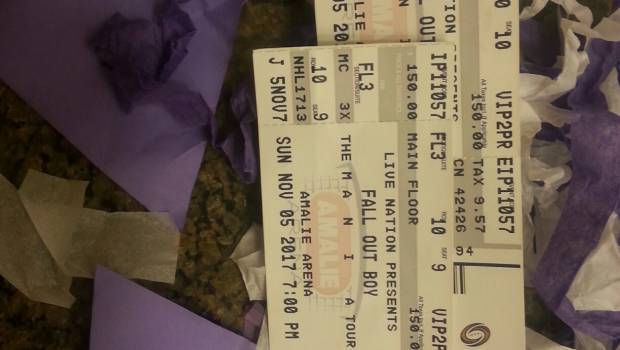 Summary: Fall Out Boy on the MANIA tour brings the goods!

Fall Out Boy In Concert

The power of Fall Out Boy is a thing that has a life of its own. From the hard-core fans that followed the band from its very early days to those that discovered the band later on, or been introduced to them only a couple of years ago. Like my wife, who took up drumming opposite my guitar playing much to my delight. I introduced her to Fall Out Boy’s music, and she fell in love with the complexities of the music as well as the lyrical turn of words and references.

The power of Fall Out Boy also uniquely makes fellow fans feel a sense of belonging. As my wife and I waited in the VIP area to be let in with the other Presale ticket buyers, we chatted about the songs, especially the new ones and all agreed we loved how the band keeps changing musically over the years. Not so much so to totally alienate the fans, but, change as they grow as a band, and as people. They take us on their journey and offer bits of their lives and experiences in the music. It is a welcome journey, which the fans all agreed is a cherished thing that FOB share with us.

As we looked around the room, we saw fans of various ages. Many teens and younger, but also the older generation was being represented as well. Not just parents bringing the kids to the show. Older folks, 30’s and up, there to see Fall Out Boy themselves. So, there we all where, me at 53 and wife at 50 sharing tales and thoughts of the songs with teens and older, all of us part of this special bond of music that brought us all together. Our much-loved band, Fall Out Boy.

Though they perhaps never set out to make any milestones the Band’s Debut album “Take this to Your Grave was major influence on what pop-punk music could be.

Fall Out Boy formed in Wilmette, Illinois, a suburb of Chicago. Formed by Pete Wentz and Joe Trohman as a sort of side project, from the more hardcore bands they had been in at the time. Patrick Stump joined not long afterwards from a chance meeting with Joe Trohman and introduced to Pete Wentz. After going through a few drummers, they found Andy Hurley. 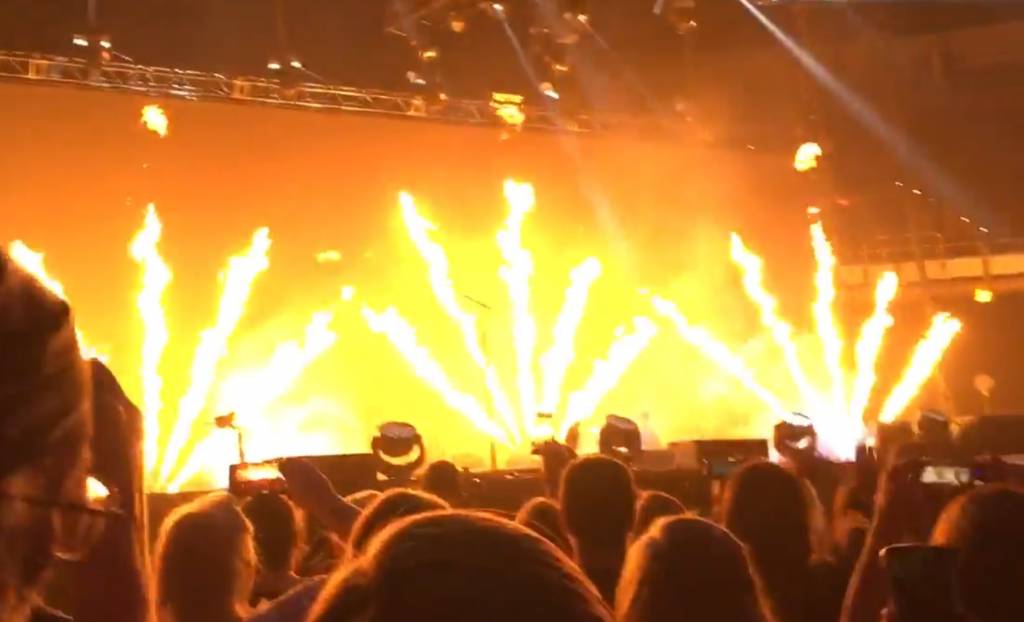 How the musical fates threw them all together does a twist of good fortune for the music-loving world, the results is unmistakable. The four of these talented musicians together is the stuff of legend. While it may make them uncomfortable and it may be far from their minds, the fact remains that they inspire, touch, and lift up countless people with their music.

Their music has helped me through some dark times and helped me feel celebrative in some good times. Therefore, it was a special treat to be able to get to see them live in concert for my wife and my 30th wedding anniversary. 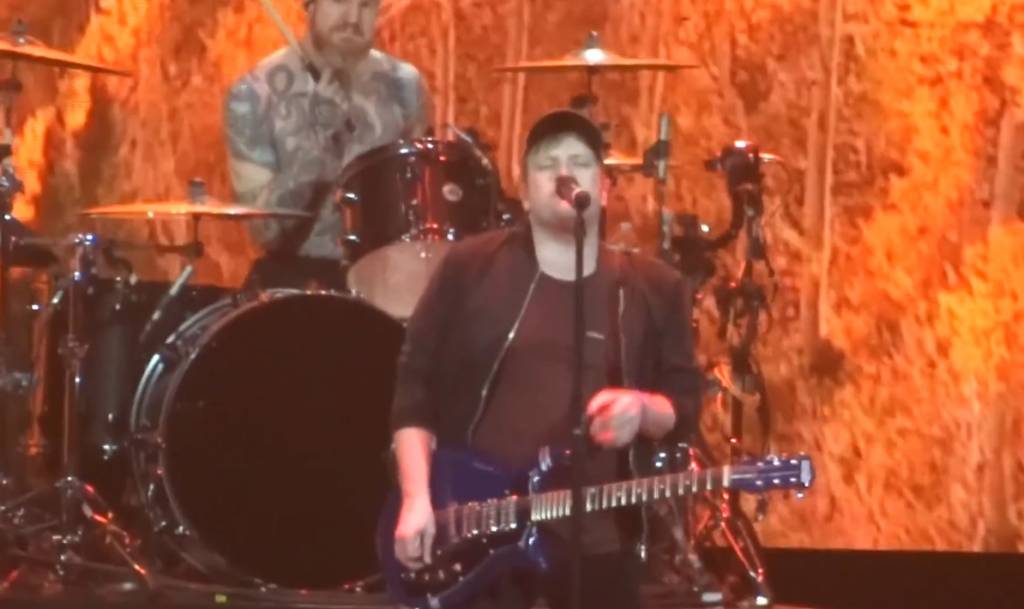 The odd thing about the MANIA tour is that it was to support the latest album, “MANIA”. Which unfortunately was postponed, though for good reason. Fall Out Boy have never been known to put anything out that was sub-par. Imagine if you will being the band and listening to the album before the much anticipated release, and realizing that the album was just not right. If the songs come off as not very good to the musicians that created it, then there is a more than better chance that yes…there is a problem. Patrick Stump is quoted as saying he was freaked out by the realization. After speaking to Pete Wentz it was agreed that something had to be done. Pushing the album release to January 2018 happened, though of course the tour would go on. Fall Out Boy has always had references in their song lyrics as well as song titles of popular culture that has influenced them in some way. The New MANIA Album seems to be holding true to this. Unless I miss my guess and reference, one song titled “Bishops Knife Trick” reminds me of the artificial life form in the film Aliens when Bishop was coaxed into doing his knife trick with the help of a not so willing colonial Marine. This is a song not yet released, but the title sparks that memory for me. 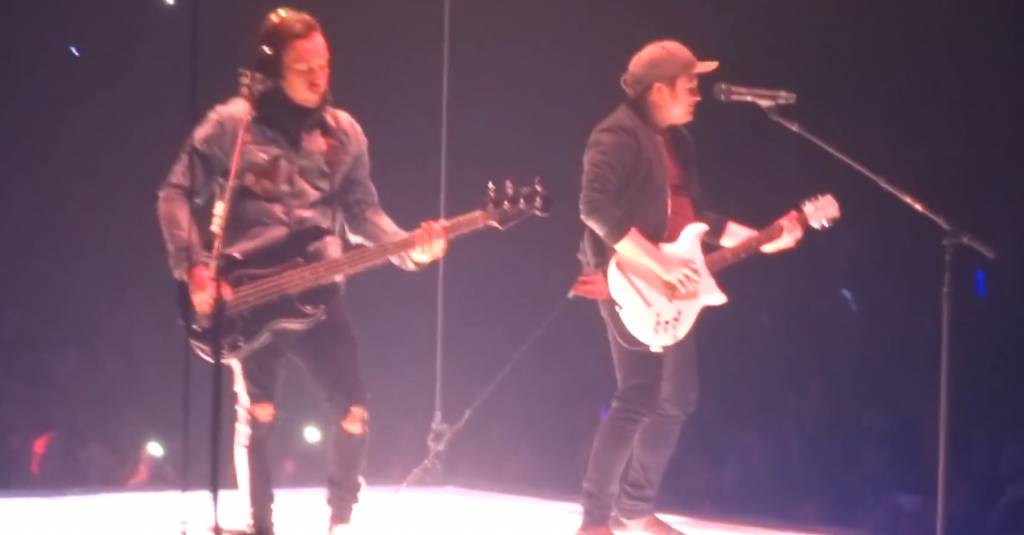 So far, several songs have been released from the upcoming MANIA Album. The MANIA Album shows the genetics of Fall Out Boy, though with a leap of forward motion of growing up and living life. It shows musicians willing to experiment and grow in ways that invite us to go on a musical journey. As music production grows, and new exciting techniques and tools are introduced, musicians that fail to embrace and grow only limit themselves. 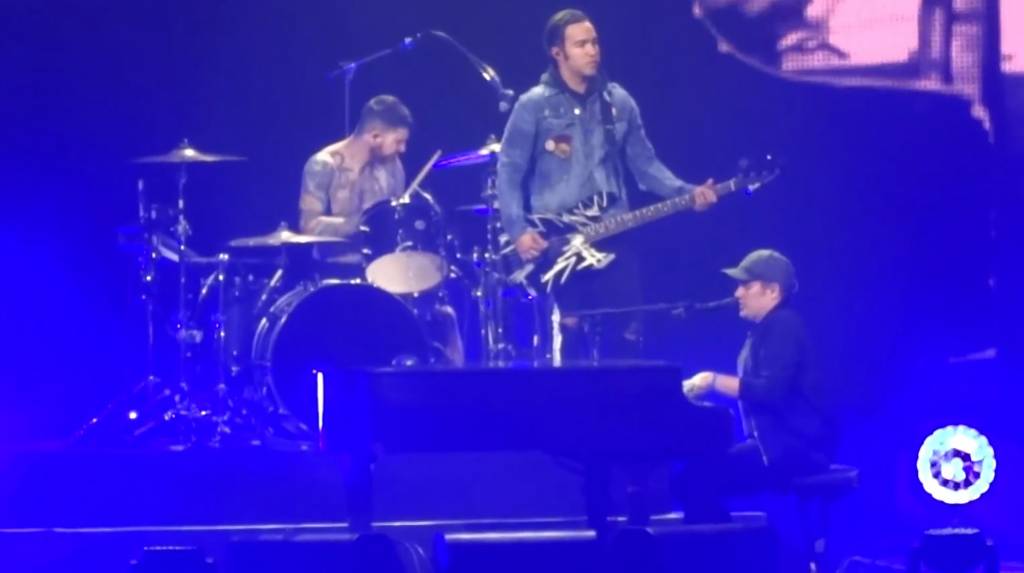 They are the same Fall Out Boy so many of us fell in love with back in the day, and they are a different Fall Out Boy that surprises and delights as they grow as people and musicians.

The new songs and album have caused deep visceral responses, with the mix in songs of crisp sounds and syncopated mayhem. The Album name thus far has caused exactly what its title states….MANIA.

Fall Out Boy Live MANIA tour is a step into a whirl wind rush of MANIA as well. The spectacle and songs along with the staging and showmanship all inspire to give the feeling of a frantic MANIA that the audience is part of. It is a feel good energized party from start to finish. 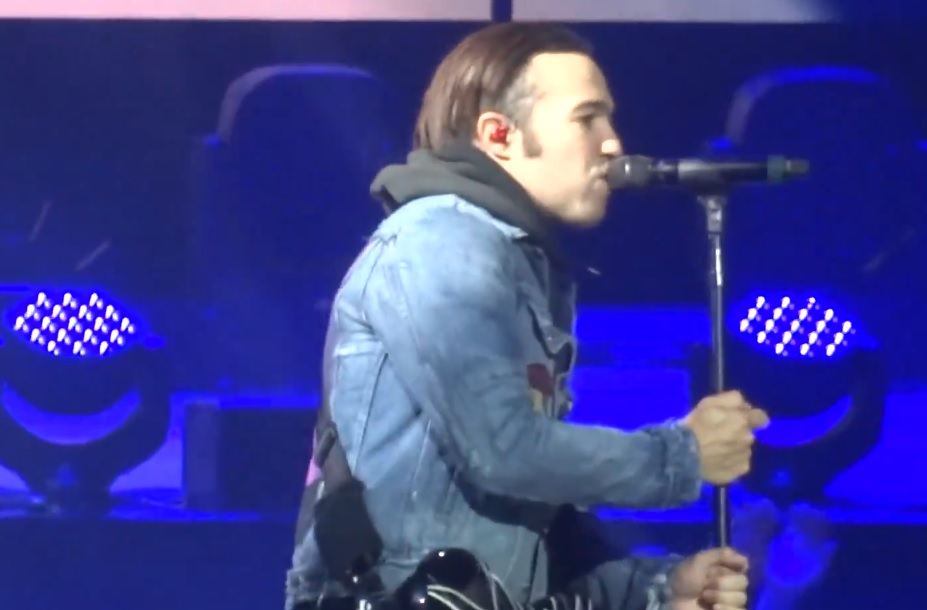 A countdown clock displayed on the biggest High Def screen I have ever seen was the centerpiece, leading into a fiery introduction to the Band as they rise in blasts of fire to the song “The Phoenix”. It was a rush of high energy, all of us in the crowds gripped in the MANIA of Fall Out Boy. 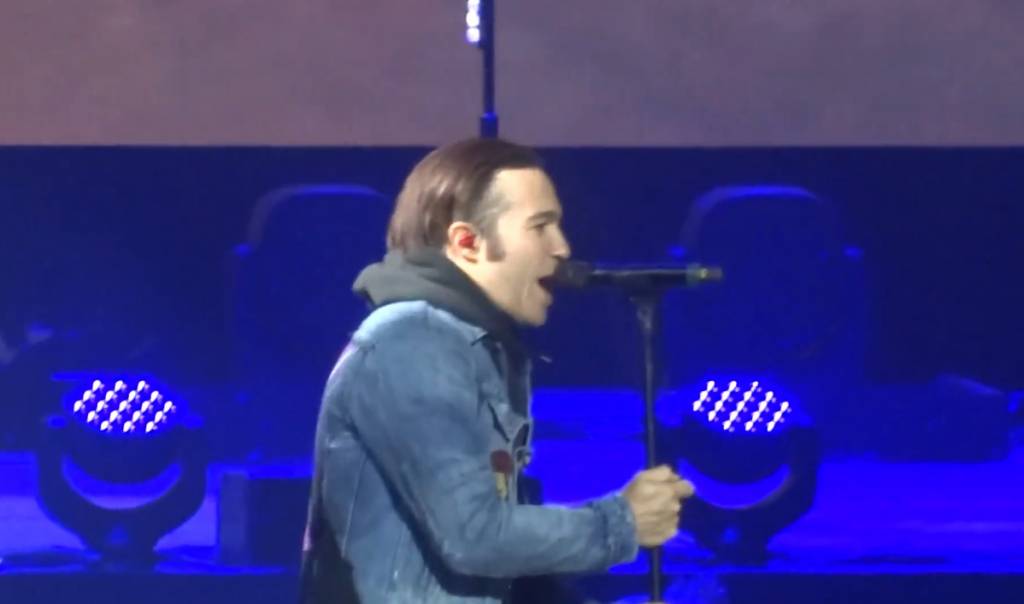 The stage set up makes use of an awesome set up, Designed to bring the performers closer to the audience and therefore build on the excitement. Bisecting the arena down the middle from the stage and making it into a T shaped staging. 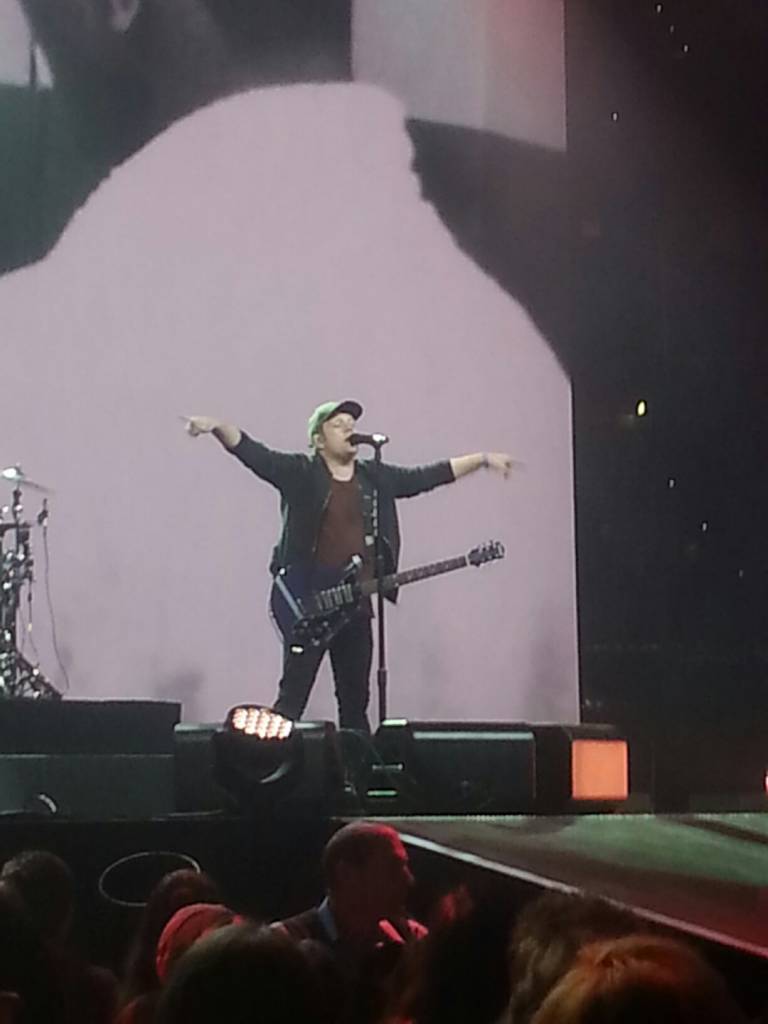 The length of the stage that went through the audience rigged with air cannons and pyro sparklers along its edges. During the night different parts of staging blasting columns of fire and raining blasts of sparklers accented songs. At one point, the party was truly a party as the whole arena became of blast of purple and white streamers and confetti. Some of which my wife draped around her shoulders as a memento for this stellar evening. 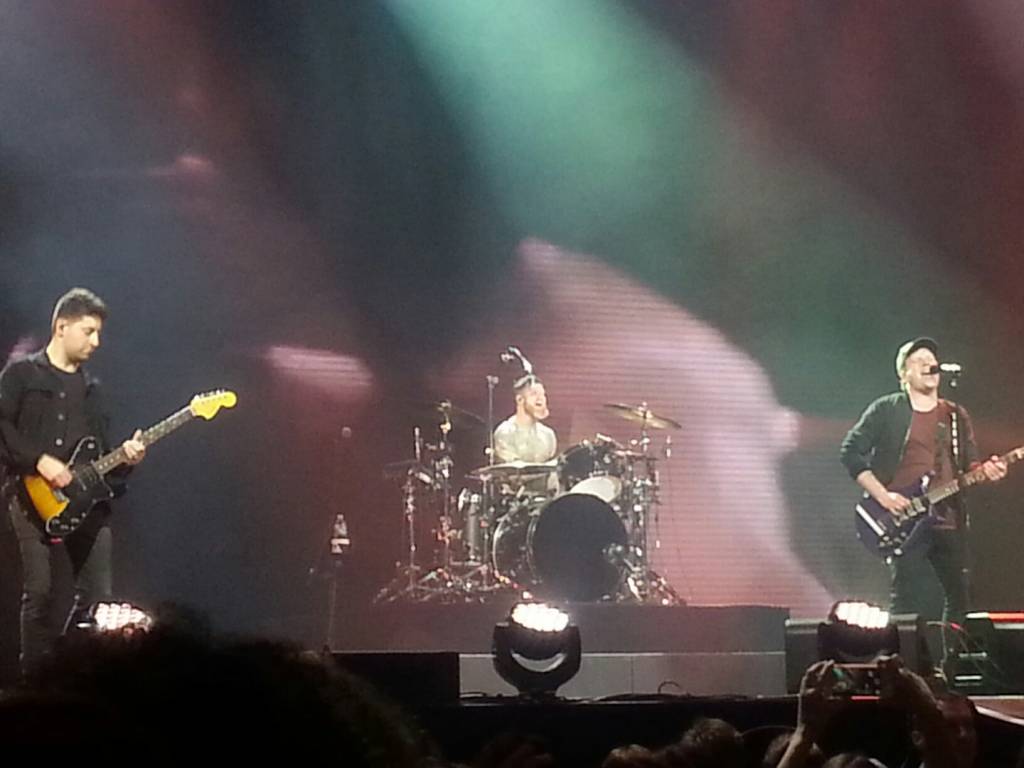 During one particular moment, the band APPEARED from the stage at one moment to the other end of the arena. (Thanks to a cleverly hidden train like track and pulley system under the length of the stage that the guys where spirited from the main stage in.)

There at the end of the T stage in the middle of the audience, they tethered themselves to what turned out to be parts of staging that lifted high into the air as they launched into some of their most beloved songs such as “Dance, Dance”. 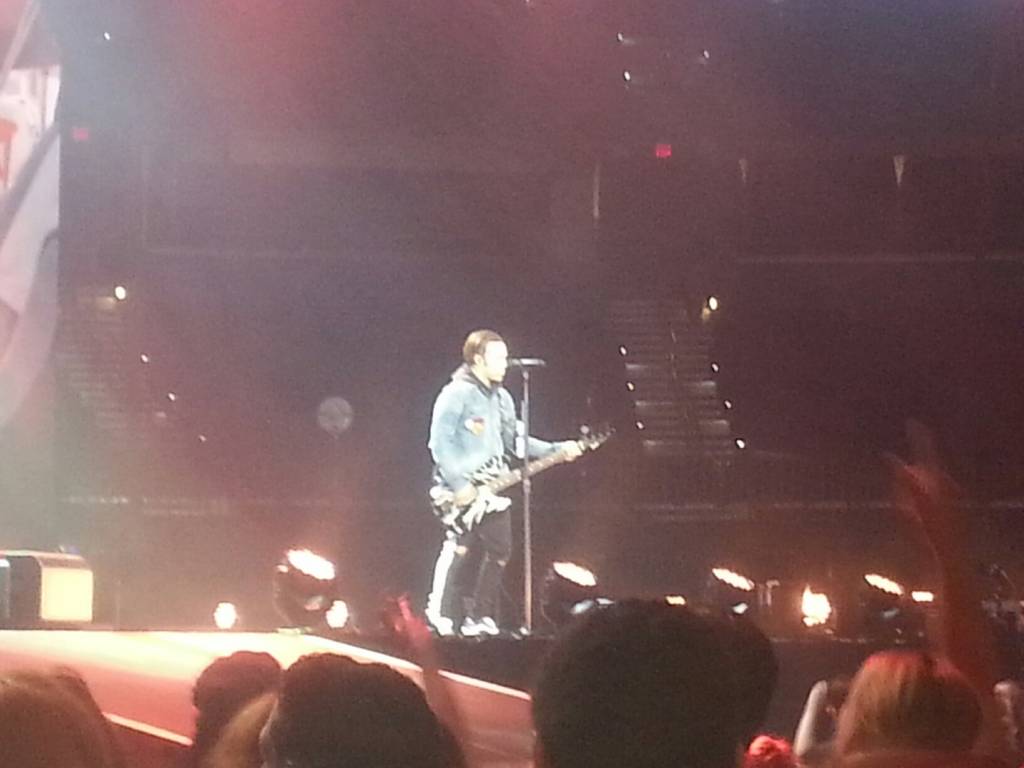 Throughout the evening, Fall Out Boy jammed out some songs from the new album MANIA, as well as some of their well-known hits such as “Sugar We’re going down”. Filled with a frantic energy that was infectious throughout the evening the show did not disappoint. Everyone had their moments in the spotlight, all the while delighting the audience with the music. The MANIA tour is going on now and if you get a chance to catch Fall Out Boy in Concert, I urge you to treat yourself to a spectacular time. If not, then at least check out the MANIA album, due out in mid-January.