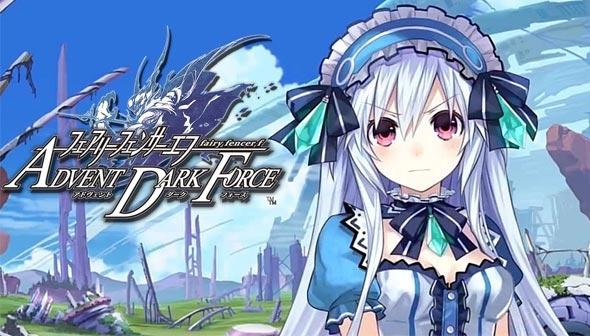 Set your weapons to Fairize, because Fairy Fencer F™: Advent Dark Force comes to the Nintendo™ eShop on January 17th 2019! It will be available for the Nintendo™ Switch only in digital form and will include all 25 items of DLC available in the original PlayStation®4 release. To celebrate, we are offering a 20% discount off the £29.99 price for the first two weeks of launch. The North American version will be released by our very good friends at Idea Factory International.

In a land filled with power-imbued weapons known as Furies, the Fencers who wield them are locked in combat to collect as many Furies as possible. The unassuming hero, Fang, finds himself caught up in their struggle when he pulls a sword from a stone. With up to six characters on the battle field, a revolving cast of party members, and a customizable world, join Fang and his band of Fencers in an epic battle to revive the Goddess or the Vile God!

Long ago, a war waged between the Vile God and the Goddess.

The battle was fierce; the two were equally matched. Finally, both sides unleashed special weapons that contained fairies imbued with their power. Using this power, each god sealed away the other within another world. And so, time passed…

The weapons that the Goddess and the Vile God left were called Furies, and the warriors who used them were called Fencers. Rumors arose that the Furies were so powerful, whoever collected them all would be granted one wish. As a result, Fencers fought each other endlessly to obtain them.

By chance, a young man named Fang happened to unwittingly become a Fencer, and saved a girl named Tiara. And she, too, was a Fencer.

From that day forward, Fang found himself an important part of the battle between the Goddess and the Vile God.

Gamespew gave it 8/10, calling it: “probably the best JRPG currently available on the PS4.”

Digitally Downloaded gave it 4.5/5, saying: “Tsunako’s designs, especially, are just incredible. Her use of clean, defined lines and rich colour makes each character distinct, and absolutely gorgeous both in motion and the stills.”

GameCritics gave it 8/10 and said: “It’s absolutely worth playing for anyone who missed it the first time, and the new features and content make a strong argument for existing fans to take a second look.”

We Got This Covered awarded it 4 stars and said: “Fast-paced, chaotic combat, an excellent soundtrack and solid improvements over the original game make Fairy Fencer F: Advent Dark Force an infectiously fun time.”

©2018 IDEA FACTORY/COMPILE HEART.  All rights reserved.  Fairy Fencer F is a Trademark from IDEA FACTORY.  Licensed to and published by Ghostlight.