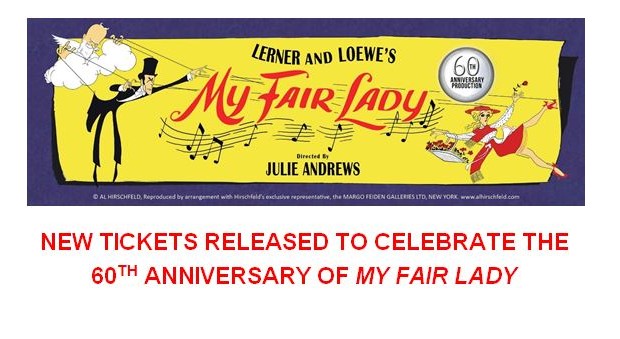 Tuesday 15th March marks the 60th Anniversary of My Fair Lady’s opening night on Broadway in 1956. To celebrate the anniversary, producers Opera Australia and John Frost announced a release of new tickets to the Sydney season.

My Fair Lady will play at the Joan Sutherland Theatre, Sydney Opera House, from 30th August, 2016 for a strictly limited season and the new tickets will go on sale on Saturday 19th March.

Commenting on the 60th Anniversary Dame Julie Andrews said “My Fair Lady is a magical piece of musical theatre and I am delighted to help bring that magic to Sydney in August when this new production previews and opens in September.”

My Fair Lady’s 1956 Broadway premiere was a momentous hit, it became the most successful musical ever to be based on a play and set a record for the longest run of any major musical theatre production in history. It won a raft of awards across 1956 and 1957, the most prestigious being six Tony Awards including Best Musical, Best Costume Design and Best Scenic Design.

The collaboration of Alan Jay Lerner and Frederick Loewe for My Fair Lady elevated these highly gifted men to a place where they were acclaimed the best writer-composer team in the American musical theatre.

Cecil Beaton, the Academy Award–winning stage and costume designer, designed the costumes; and Oliver Smith the renowned American scenic designer created the sets. The collaboration was hugely successful and delivered to its audiences an experience unlike any had in the theatre before: the mechanics, the lighting and the overall design delighted young and old driving an unprecedented number of people into the theatre.

This 2016 recreation of My Fair Lady has been more than a decade in the making with the producers and research teams travelling all over the world to uncover the elements that made the original so extraordinary. Trips to Wisconsin, London, New York City and Los Angeles were made and hours were spent trawling over drawings, costume and set designs in the Victoria & Albert Museum and the Arts Centre Melbourne Performing Arts Collection just to name a few.

The New York critics were unanimous in their delight of the 1956 Broadway production of My Fair Lady:

“One of the best musicals of the century.” Brooks Atkinson, The New York Times.

“Wonderfully entertaining and extraordinarily welcomed……..meritorious in every department.” Wolcott Gibbs, The New Yorker.

It is Sydney’s turn to witness history in the making with the recreation of this musical theatre masterpiece.

My Fair Lady will commence at the Sydney Opera House on 30th August 2016, new tickets will go on sale on Saturday 19th March to celebrate the 60th Anniversary.