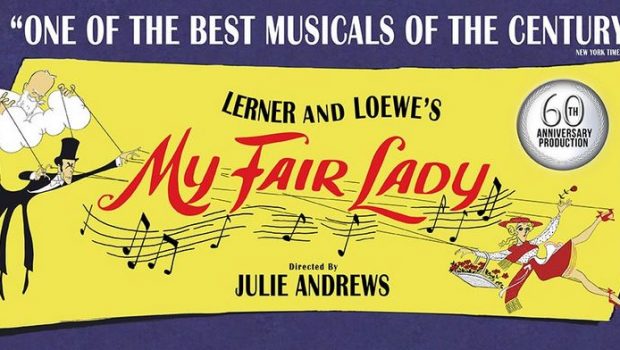 The production will travel to Brisbane’s Lyric Theatre, QPAC from 12 March and Melbourne’s Regent Theatre from 11 May, 2017.   Tickets for the Brisbane and Melbourne season will go on sale in October.

Young Australian performer, Anna O’Byrne will star as Eliza Doolittle with the full Brisbane and Melbourne cast to be announced later this year.  Anna was cast by Andrew Lloyd Webber to create the role of Christine Daaé in Love Never Dies, his sequel to The Phantom of the Opera and has since gone on to enjoy an international career spanning opera, theatre, concert and film.

Julie Andrews, who created the original role of Eliza Doolittle in the Broadway and London productions directed by the legendary Moss Hart,  said “MY FAIR LADY is one of the great musicals from Broadway’s golden age, and I am delighted to help bring it to Brisbane and Melbourne in 2017.”

Associates of the original design team have come onboard for this production to help bring to life once again the stunning sets by Oliver Smith and glorious costumes by Cecil Beaton.  Contributing to the creative team is Tony-award winning choreographer Christopher Gattelli, musical director Guy Simpson, lighting design by Broadway and West End legend Richard Pilbrow and sound design by Michael Waters.

Renowned producer John Frost said “The response we have had to the Sydney season has been truly overwhelming and to meet demand we have announced today that the show will travel to Brisbane and Melbourne. This 2016 recreation of My Fair Lady has been more than a decade in the making and we are excited to share it with Australian audiences”.

Producer Lyndon Terracini, the artistic director of Opera Australia, said “This is a brilliant musical that charms audiences with its warmth and vivid characters. It is indeed a privilege to work with Julie Andrews and we are thrilled that Brisbane and Melbourne audiences will have the opportunity to see the magic she has created for this new production of My Fair Lady.”

This production celebrates the 60th anniversary of this beloved musical which took the world by storm, telling the tale of a Cockney flower girl named Eliza Doolittle whose world was forever changed by the brilliant and demanding phoneticist, Professor Henry Higgins.  The clash of cultures sparks some of theatre’s most witty dialogue and wonderful songs.