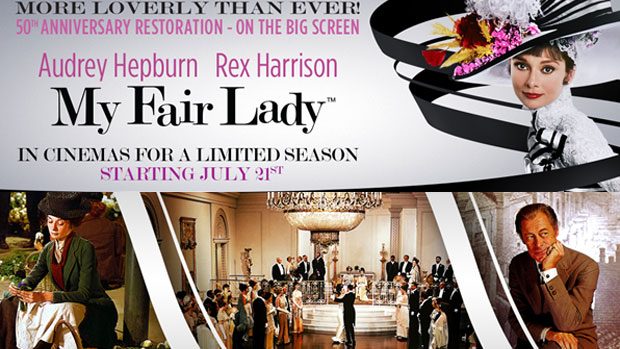 17th June 2016: Umbrella Entertainment is pleased to present the 50th Anniversary restoration of MY FAIR LADY on the big screen in selected cinemas from July 21st, 2016.

My Fair Lady winner of eight Academy Awards, including Best Picture, Best Actor, and Best Director, is arguably the greatest movie musical of all-time. A jewel of a film and one that certainly ranks high among the greatest motion pictures ever made and having recently enjoyed a pioneering restoration effort in time for the 50th anniversary of the original Australia/New Zealand theatrical release starting on July 21st.

This gloriously witty adaptation of the Broadway musical about Professor Henry Higgins, who takes a bet from Colonel Pickering that he can transform unrefined, dirty Cockney flower girl Eliza Doolittle into a lady, and fool everyone into thinking she really is one, is now looking more “loverly” than ever!

Robert A. Harris, a film preservationist whose work to restore films like The Godfather Lawrence of Arabia Spartacus Vertigo have earned him well-deserved praised within the industry, has completed a brand new million dollar restoration effort on My Fair Lady coming to a cinema near you.