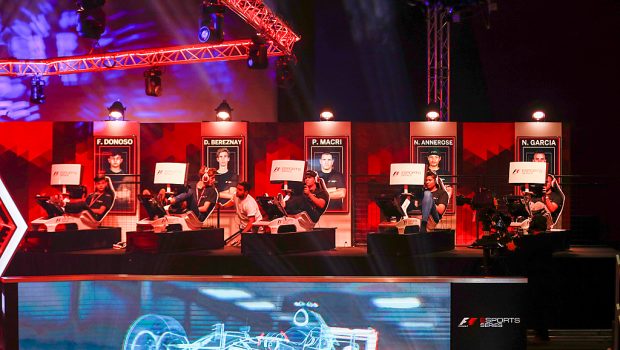 SYDNEY, 13th October 2017 – Twenty F1 esports drivers qualified yesterday night for the first-ever Formula 1® Esports Series Finals, which will take place in Abu Dhabi on 24th and 25th November, forming part of the 2017 FORMULA 1 Etihad Airways Abu Dhabi Grand Prix. The 40 semi-finalists battled it out at London’s Gfinity Esports Arena in front of a capacity crowd, which were treated to a nail-biting  evening of intense racing, driving skill and tactical acumen.

British comedian and presenter, Tom Deacon, commentated the action-packed event when 40 skilled esport drivers battled in eight seeded heat races featuring the Interlagos and Silverstone tracks. Fans from around the world participated in the highs and lows of the races, cheering their favourite drivers from afar: between them these fans clocked up 1.8m minutes watched on Facebook, plus 3.1m views on Instagram and Instagram Stories and 1.5m Instagram impressions, also 1.8m Twitter impressions, and the live Twitch stream was enjoyed by over 125,000 viewers. In the UK the event was aired live on both Sky Sports Mix and Sky Sports F1, reaching an audience of 282k, the highest of any live esports event broadcast on linear TV in the country.

Particular excitement came as one of the British drivers, Brendon Leigh, became the quickest after the qualifying races and he duly delivered on his promise by dominating both of his races. Another highlight of the night was the final heat, when Patrik Holzmann and Frederik Rasmussen had an epic battle, which involved a tactical pit stop from Rasmussen, during which he gained valuable seconds on his rival, and only in the very final lap was Holzmann able to pull away and secure his place in the final.

For those who missed out on the action, highlights can be found on the official F1 Esports Twitch channel.

The twenty finalists are:

To participate in the semi-finals was a huge achievement for the 40 gamers. A total of 63,827 players took part in the qualifying stages, completing 976,870 laps. Over 195,000 race times were posted on the official leader-boards (f1esports.com.). The 40 semi-finalists came from 16 different countries: UK was the most represented with eight players. The youngest esport driver was 16 years, the oldest 33.

In Abu Dhabi, at the end of a three-race event, the first Formula 1 Esports Series Champion will be crowned on the same weekend as the final 2017 Formula 1 Grand Prix. The winner will be named the Formula 1 Esports Champion Expert for 2018 and will automatically qualify for the semi-finals of next year’s F1 Esports Series. They will be offered the opportunity to live the full experience of a Formula 1 race by attending one of the 2018 Grand Prix, and to become a character in the F1™ 2018 videogame.

The F1 Esports Series is a partnership between Formula 1, the world’s premier motor sport; Codemasters, the leading racing game developer and publisher; and Gfinity, the global leader in esports events and competitions.

The 2017 F1 Esport Series is the first year of an annual competition, highlighting the sport’s long-term investment in esports and gaming as well as its continued ambition to build a greater connection with wider audiences, especially younger fans.

The launch of the competition coincided with the release of the official F1™ 2017 game allowing gamers to get closer to Formula 1 than ever before. Released worldwide on PlayStation® 4 computer entertainment system, Xbox One and Windows PC (via Steam) on August 25th, F1 2017 is the most feature rich game in the franchise’s history and the new F1 Esport Series is open to players on all three platforms.