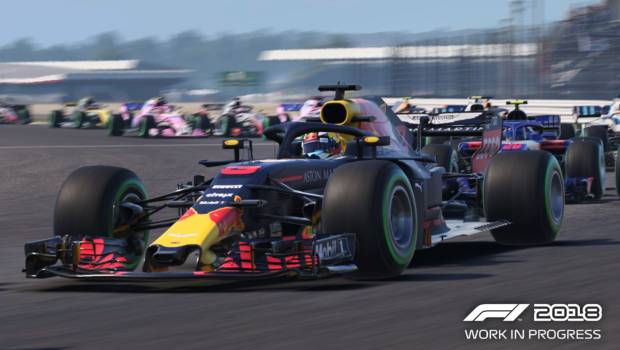 SYDNEY, 10th August 2018 – Codemasters® has today released the third part in a series of developer diaries for F1® 2018, the official videogame of the 2018 FIA FORMULA ONE WORLD CHAMPIONSHIP™, detailing how the new game boasts the most authentic F1® car handling simulation ever seen in the franchise.

The third of the four part series, which is available to watch now at www.youtube.com/formula1game, reveals that F1® 2018’s car simulation and handling has significantly advanced this year, with revamped suspension and chassis physics, the addition of real world F1® data for unprecedented accuracy, new “tyre carcass” temperature for the first time, as well as manual deployment of the ERS system. The ultimate result of these enhancements is that the gamer can experience the pure sensation of the tyres tearing into the track surface, and therefore giving a realistic and relatable feeling of grip, under all wear, compounds and weather conditions.

“I believe F1® 2018 is a massive step up, because we’ve introduced so many more simulation aspects that I believe will be very well received by all the players,” commented David Greco, Senior Car Handling Designer on F1® 2018. “To choose which one is the most important and advanced is quite hard, but I would probably say it is the expanded system which enables us to simulate the tyre temperature more realistically than we have ever done before.”

He continued: “This year, the way the car feels, with the ‘Force Feedback’, and how it all works together, we are very close to what I want from a simulator. In over 20 years of my career between sim racing and real motorsport, I have always come across questions like: ‘one title is more simulator than another title, because it’s very difficult to drive?’ With my real motorsport experience, I can say that real racing cars are made to have a lot of grip. To me, a simulator is not how easy it is to drive or how easy to make it spin. To me, a simulation is how many real-life, physical components we simulate, and especially this year, there are not many features that I can think of that we don’t simulate. To just call it a game to me is not enough anymore.”

F1® 2018 features all the official teams, the drivers and all 21 circuits of the thrilling 2018 season, including Circuit Paul Ricard and the Hockenheimring. As well as the current season’s offerings the game includes 20 iconic cars from the history of the sport. F1® 2018 will release onto PlayStation®4 computer entertainment system, the Xbox One family of devices including the Xbox One X and Windows PC (via Steam) worldwide on Friday 24th August 2018.