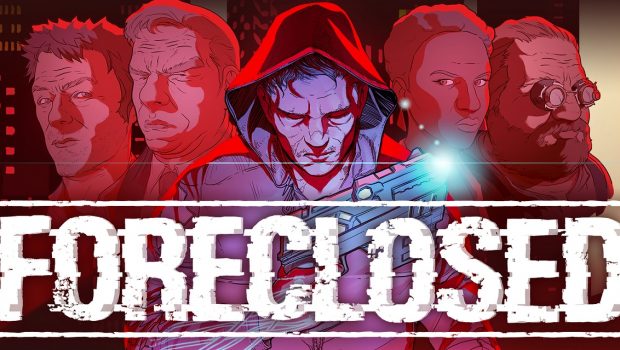 What would you do if your identity was stolen? Merge Games and Antab Studio are thrilled to announce the release of their narrative-driven futuristic shooter, FORECLOSED. Combining a stylish comic book aesthetic and hectic cyberpunk action, FORECLOSED is now available on Steam, Epic, Stadia, PlayStation 4/5, Xbox Series X and, Nintendo Switch.

FORECLOSED is available on consoles and Stadia at $19.99/£14.99/€19.99 with a 20% discount at launch, and on Epic and Steam at $16.99/£13.49/€16.99 with a 15% launch discount.
Follow the story of Evan Kapnos in this sleek comic book-styled game as he unravels the conspiracy behind his identity foreclosure. Who is responsible and why?
FORECLOSED combines the playability of video games with the sleek visual aesthetic of comic books. Everything from gameplay to cinematics are experienced within the stylistic framework of a graphic novel. Fullscreen and comic panel perspectives are seamlessly blended as you move throughout FORECLOSED’s cyberpunk city, uncovering a gripping conspiracy story. Cutscenes are also interactive and transition smoothly between alternative gameplay styles.
Key Features