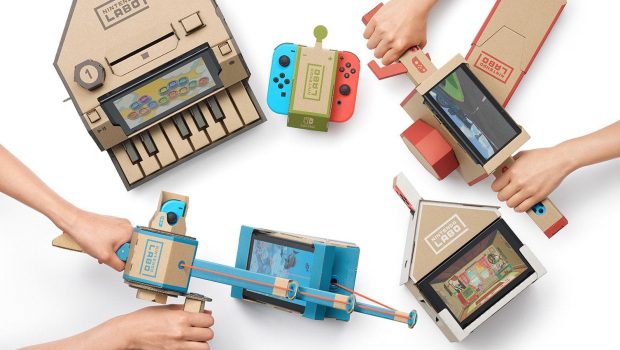 With a wide variety of activities, kids and families can make, play and discover in a whole new way, and even create their own VR games

22nd March 2019 – Ever wish you could paint like an elephant or feel like a superhero by stopping an alien invasion? Nintendo Labo: VR Kit launches exclusively for Nintendo Switch on 12th April with dozens of simple and fun virtual reality* experiences for kids and families to build and enjoy together. Get a sneak peek at what’s included by checking out the new Nintendo Labo: VR Kit – Launch trailer on the official Nintendo YouTube channel.

Combining the innovative physical and digital gameplay of Nintendo Labo with basic VR technology, Nintendo Labo: VR Kit introduces virtual reality in a unique and approachable way. Each Toy-Con offers a unique range of experiences that combine tactile feedback in the real world with exciting virtual adventures. The Toy-Con Wind Pedal simulates flight with blasts of air, while players can charge the Toy-Con Blaster before launching a volley of lasers (or fruit). Players can make different DIY cardboard creations like a Toy-Con Elephant or a Toy-Con Camera; play a variety of VR games and experiences with these creations; and discover how it all works – or even design their own bite-sized VR experiences with the included programming tools.

All the games and experiences in Nintendo Labo: VR Kit are designed to be shareable, fun and social. By alternating turns, everyone in the room can watch and enjoy the player’s reactions and join the fun. Some games even allow players who aren’t looking into the Toy-Con VR Goggles to interact with the onscreen experience. For example, if one player is exploring the in-game ocean and taking photos with the Toy-Con Camera, another person in the room can wear the Toy-Con Snorkel accessory and step in front of the Camera to make a bug-eyed fish swim quickly toward the player’s face – the reaction is priceless!

The Nintendo Labo: VR Kit offers a variety of games and experiences that work with the different Toy-Con creations, including: