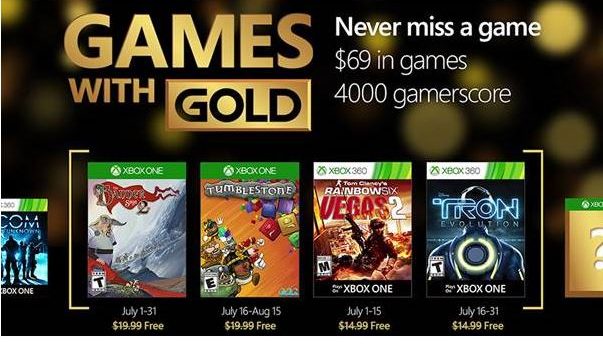 On the heels of a great start to winter, July will see the Games with Gold roster take on four newcomers – and four fantastic games, at that. As with last month, Xbox One will get two dedicated titles, and two Xbox 360 titles through Xbox One Backward Compatibility, for a total of four completely free titles thanks to Games with Gold. Xbox 360 gamers, of course, also get access to the latter two titles.

For Xbox One, July brings two exciting ID@Xbox games launching into Games with Gold with the critically acclaimed ‘The Banner Saga 2’ coming to the program on July 1 and the award-winning ‘Tumblestone’ on June 16. On the Xbox 360 (and Xbox One through Backward Compatibility), Xbox Live Gold members start the month with smash hit ‘Tom Clancy’s Rainbow Six Vegas 2’, and then go off the grid with ‘Tron: Evolution’.

As usual, all games are available only for a limited time, as part of the ongoing Games with Gold program, so sign up now to get in on the action!

For more details on the great games being offered in July, please visit the Xbox Wire.