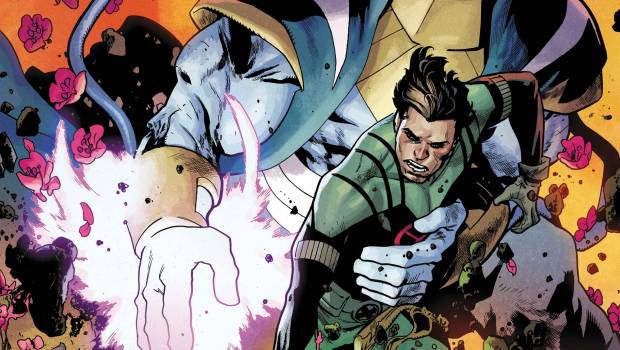 The Story: Rictor is having a nervous breakdown and so are his powers. Morgan Le-Fay is still angry, and Shogo is a dragon…? What!?

Summary: Rictor’s powers are so out of control at the moment that he can’t step on the ground without causing and earthquake. The team messages him for help, but Rictor can only crawl into a box of rocks for his (and everybody else’s safety.)

We go on over to Morgan Le Fay’s lair Camelot as she yells at one of her minions that her scrying pool still has some Krakoa in it. She contacts someone and we see that she has allies in the Coven Akkaba. She assumes that Apocalypse is the cause for the Krakoa gates appearing in her realm and is even more distressed to find out that Britain doesn’t yet know that the powers of Captain Britain have been passed to another (and a mutant at that.) She plans to make sure that the news does get out, but s distracted by a familiar dragon flying by her window.

So Shogo is a dragon? OK! The faerie magic allows him as a mortal child to assume whatever form he wants in Otherworld and that’s a dragon. Betsy senses that Shogo located Morgan’s castle and wants to go straight there to rescue her brother, but Gambit is afraid of Rogue’s condition and the fact that they left her with Apocalypse.

Brian is locked in a dungeon, but senses Bet’s approach and wants her head. The trio lands and starts an attack, which they seem to be slowly winning until Brian shows up… and boy is he out for blood. He and Betsy fight and for a brief instance, she seems to get through to Brian. It doesn’t last for long though and after a save from a fire-breathing Shogo, they make a retreat. Morgan toasts her as they fly away, which Betsy hears telepathically.

We end the issue with Apocalypse. He finds that humans have been using magic so much over the years that he needs a focusing point to keep the Krakoa portals open in Otherworld. He travels to retrieve Rictor and soothes his fears. He tells Rictor he will fix whatever he breaks. They wind up on a patch of Krakoa in England and are confronted by Peter Wisdom, who is looking for Captain Britain.

This is the type of book that I love: a little serious, a little funny, and a whole lot of mutants. Excalibur is by far the best book of the “X” line after X-Men. The colors in the book are vivid (I really like Rictor’s powers being represented by green energy.) The surprise ending of Peter Wisdom showing up is also nice. It’s easy to forget that he’s actually a mutant as well. The world of mutants is rapidly growing again.

The only problem I have with this book is that it moves a little slow. Yes, we know that Morgan has ensorcelled Brian, but we need the next part of the story to kick in. Add to that the fact that I still have no idea what Apocalypse… Ahem, I mean “A” is trying to do. The fact that they trust him after all these years is still mind-boggling… but we’ll have to see if that comes back and bites them in the butt.