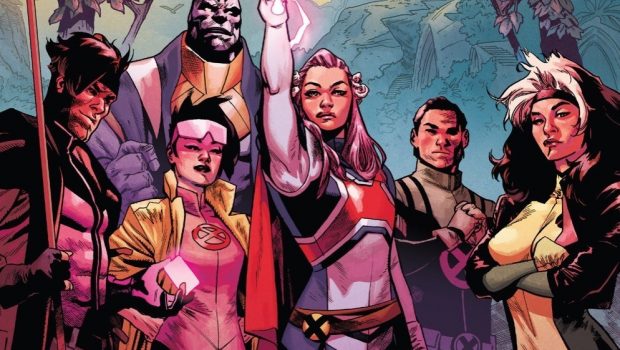 The tale starts in The Otherworld’s Camelot where King Arthur of lore has gone missing and his kingdom is under siege. The reader begins to follow Queen Regent Morgan Le Fay as she discovers that the mutants’ Krakoan flowers have begun to infect the sacred waters of Avalon. It’s an interesting idea that Krakoa’s reach doesn’t stop at the far corners of Earth, but through to other realms as well, one can’t help but wonder how this connects to the new age of X we’ve so recently seen established though. There is some narrative whiplash as Tini Howard begins to assemble the team and we follow the Braddock family, Apocalypse, Jubilee, Rogue and Gambit. The connections between the characters seem tentative at best and the formation of the team doesn’t feel as organic as it could. This applies especially to the inclusion of Rogue and Gambit, as well as the hard-to-follow usage of Rogue’s powers.

One small thing that bothered me was an odd choice Tini Howard makes throughout the issue with its two protagonists: Betsy Braddock and Apocalypse. These two characters are constantly correcting others on what to call them – Betsy prefers her given name over Psylocke (the name she associates with the woman who’s body she’s been inhabiting for the last several years) and Apocalypse has chosen to go by an indecipherable symbol in the Krakoan language. These corrections happen fairly often, to the point that they’re a distraction – Betsy and the Artist Formerly Known as Apocalypse actually correct each other on subsequent panels at one point. The choice is even stranger when combined with last week’s Marauders #1 and Kitty – er… Kate Pryde’s similar name change.

Marcus To and the rest of the art team put together a solid, but not spectacular issue. Looking back, there aren’t many panels which stick out in my memory – good or bad. If there’s a highlight, I am a fan of Betsy’s new Captain Britain costume design as it seems to combine the best aspects of her Braddock lineage with her past as Psylocke (giving her an Excalibur-esque psychic sword is an inspired choice).

On the negative side, some of To’s panel framing choices make it difficult to follow the action. There’s a scene later in the issue where Betsy holds her brother as he succumbs to Morgan Le Fay’s dark magic, only for him to reawaken and launch a surprise attack on her once she’s turned away. The framing of the scene doesn’t make it clear that Betsy’s attacker is her transformed brother and the panel layouts don’t give the scene much room to breathe. In the end, these artistic choices hurt what could’ve been a dramatic moment.

Excalibur #1 makes for an ultimately pedestrian issue. This final judgement may have something to do with the high bar the new X-Men line has set for itself, but I didn’t find myself with much that left me wanting more. However, if you’re into magic, mutants, Arthurian lore and the threads that hold them together, then this book may be for you.