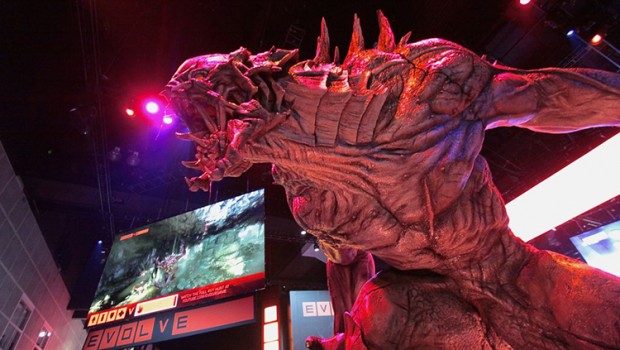 Sydney, Australia – July 3, 2014– 2K and Turtle Rock Studios announced today that Evolve, the highly anticipated 4v1 cooperative and competitive multiplayer shooter coming to next-gen consoles and PC on October 21, 2014, had a tremendous showing at E3, taking home the coveted E3 2014 Game Critics Award for “Best of Show” among more than 50 awards and editorial honours. Evolve captivated critics, with Game Informer proclaiming, “Not only is Evolve our game of the show, it’s a serious contender for 2014’s game of the year.”

“We would like to thank the press around the world for their warm and enthusiastic response to Evolve at E3 2014,” said Chris Ashton, co-founder and design director at Turtle Rock Studios. “We are encouraged and humbled to see that critics are realising what we’ve known for a long time: that Evolve is a special experience unlike anything that we’ve ever played before.”

“Evolve continues to solidify its position as one of the most anticipated games of the year,” said Christoph Hartmann, president of 2K. “The accolades for Evolve highlight the excitement and desire for new IP on next-gen systems, and we are poised to deliver what we believe will be the defining next-gen experience of 2014.”

In addition to the many independent editorial awards and accolades, 2K is proud to share that Evolve earned the industry’s most esteemed E3 honour, the Game Critics Awards’ “Game of Show,” a significant and first time win for developers Turtle Rock Studios. Evolve was also honoured with the E3 2014 Game Critics Awards for “Best Console Game,” “Best Action Game,” and “Best Online Game.”

A complete list of E3 awards and editorial honours for Evolve follows.

From Turtle Rock Studios, creators of Left 4 Dead, comes Evolve, the next-generation of multiplayer shooters where four hunters face off against a single, player-controlled monster in adrenaline-pumping 4v1 matches. Play as the monster to use savage abilities and an animalistic sense to kill your human enemies, or choose one of four hunter classes (Trapper, Support, Assault and Medic) and team up to take down the beast on the planet Shear, where flora and fauna act as an adversary to man and monster alike. Level up to unlock new hunter or monster characters as well as upgrades, skins and perks. Earn your infamy on the leaderboards and become the apex predator.

Those who pre-order the award-winning Evolve from participating retailers will receive the Monster Expansion Pack, which includes the Savage Goliath skin at launch and a new playable monster available after Evolve is released. To pre-order now, visit http://evolvegame.com/preorder.