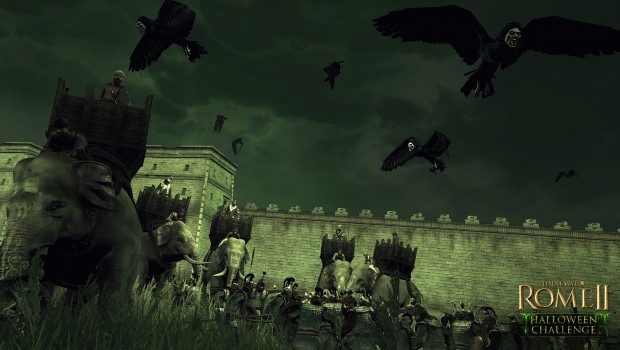 Live now, the latest free update for ROME II adds the festival of Lemuria to the game and a new seasonal challenge, Nightmare Mode!

Lemuria was an ancient feast during which restless spirits were exorcised from the home with the alternate offering of beans and then clashing of cooking pots. Perhaps an early Roman version of Trick or Treat?

Nightmare Mode can be toggled on from the game options menu, causing your troops to suffer horrifying visions in battle. Harpies descend from the skies as a terrifying atmosphere envelopes your forces. Assailed by such apparitions it is no surprise that your soldiers will find the enemy extremely frightening!

Any generals skilled enough to complete a Campaign battle in Nightmare Mode will earn a new Steam achievement and the adoration of their peers. May the gods help you if you try to complete a whole campaign…

More details on this update and exclusive new detail about the recently announced Total War: ATTILA can be found in this month’s Rally point: http://youtu.be/7bTJoRml8QY