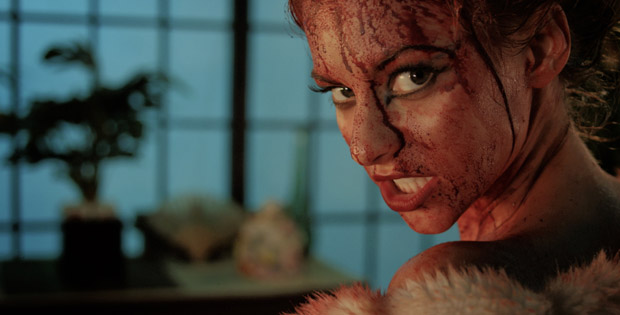 Action, horror film, EVIL FEED will be available on DVD and Digital on May 7.

Synopsis
The Long Pig Restaurant is the ultimate underground restaurant sensation, where only the richest can taste the most refined meals and worldwide best…cannibalistic haute cuisine. Newly run Steven (Terry Chen) an overachieving son who delicately put his father to retirement by severing his head, the Long Pig has introduced novelty by capturing elite MMA fighters and then serving losers to their bloodthirsty customers. Perfect “Tendertainment!”

Jenna (Laci J Mailey), an aspiring stunt girl, is violently kidnapped with her friends by Triads and wakes up in the Long Pig holding cell waiting for her turn to fight in the Pit of Gore. In order to survive, she must fight her way out before being skinned alive and becoming the next main course. Throw in the Russian mob, competing cannibals, and a nymphomaniac masseuse; and you’ve got a crazy, over-the-top, sexy and bloody hell of a dinner movie!