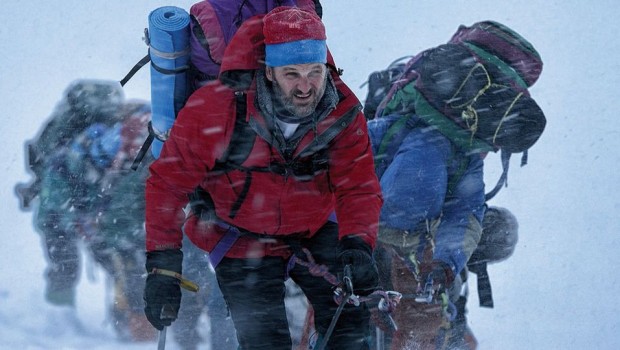 This film is based on the true and fatal story of Robert Hall, a New Zealand mountain climber, who along with several others died climbing Mount Everest. Hall is played by Australian actor Jason Clarke (Zero Dark Thirty, Planet of the Apes) who leads the expedition featuring Beck Weathers (Josh Brolin), who is a wealthy American whose vision becomes impaired on the mountain and Dough Hansen (John Hawkes) who has had to take on multiple jobs to pay for the challenge. A drunken expedition leader (Jake Gyllenhaal) is leading his own group and decides to pair up with Hall. At home, Jason Clarke’s wife (Keira Knightley) is pregnant and fearful that her husband might not return. One of Hall’s major colleagues is Helen Wilton, (Emily Watson), a Kiwi camp manager, who corresponds with the group over the radio. Once upon the mountain, members of Hall’s group start to splinter off from each other under the difficult conditions. Some perish and others are fortunate enough to make it off the mountain, in spite of the fiercely icy and deathly conditions. As a character says at one point: “Our bodies will be literally dying.”  On a technical front, this is a stronger film than some of Icelandic director’s Baltasar Kormákur previous work like Contraband. It was filmed in several countries including Italy, Iceland and Nepal. The film on the whole, particularly the breathtaking landscapes and mountain ranges, is handsomely photographed. The snowy conditions raises a question rare in films today where you ask: “How did they film that?” It’s something that has often been nullified by the ease in which computer generated images have replaced real, dangerous environments and stunt work itself.

Unfortunately, Everest’s technical feats aren’t matched by a subpar script from William Nicholson and Simon Beaufoy (Slumdog Millionaire, 127 Hours). The one philosophical question the film touches upon is: Why? Why are people interested in mountain climbing when it will not only cost them a small fortune to partake in these dangerous climbs but also risk their lives as well? The contemplation was the potential basis for a much deeper movie. But in this cut of the film, thirty minutes shorter than its original duration, that potential thesis question is addressed only briefly through rather corny responses like it’d be a crime to miss the beauty of the environment and Beck announcing that climbing is a cure for his depression. There’s no depth to any of these characters, who are merely sketches, perhaps to share the airtime of all of the available stars. It’s a splendid cast on paper. But sadly, the only conflict the script allows for is against the elements and terrain rather than building personalities to clash and boil over. There are too many good actors here for one movie, meaning some aren’t used to their full potential. Jake Gyllenhaal barely features and Keira Knightley, Sam Worthington and Emily Watson have only small parts. Perhaps the reluctance to allow any of the actors to play the role of a villain, a source of human conflict, was in a bid for realism. But it’s an objective undermined by the frequent cutbacks in conversation—an obvious and repetitive technique for building emotion—and which also lumbers the film’s pacing to a crawl. Largely, the film is sunk by the difficulty of shaping a real life event into a two-hour narrative. How do you make a mountain out of an anthill of a story? This is not a film with a plot and character but one which tries to exist solely on its crippling atmosphere and conditions alone. Some died horribly and others were wounded terribly but survived—mostly on luck. There’s not much more the audience can draw from the story or its coda. It is titled Everest and all the focus lands squarely on the conditions and the mountain itself. I would have cared so much more if the film had taken a personal, microscopic observation before its biggest steps.