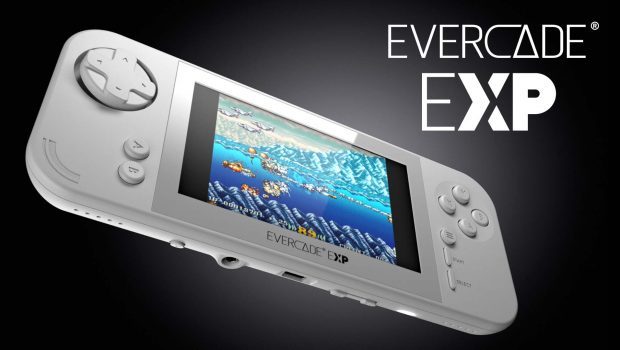 Blaze Entertainment is delighted to announce the Evercade EXP is available now globally.

The New handheld retro gaming console from Blaze improves on the established Evercacde cartridge ecosystem, bringing back the classic gaming experience of physical products, full colour manuals and collectibility for a modern audience, without breaking the bank on original hardware, software and delivering a simple turn-on-and-play experience.

The Evercade EXP has a wealth of improvements over the previous Evercade handheld release including many hardware upgrades, along with its new subtle aesthetic. With the new IPS high-resolution screen, view angles are massively improved and resolution has doubled. Built-in WiFi makes updating the console easier than ever. The improved internal specs of more RAM, more Memory and a faster chip bring the handheld up to spec with the TV-based console variant, the Evercade VS.

But most importantly, the console features a brand new mode and playing technique. TATE mode allows gamers to play vertical-orientated shooters the way they were intended to be played. With the touch of a button, the selected game will turn 90 degrees clockwise to display in the vertical orientation, and the new TATE buttons on the left of the device now control your game. Simply hold the console on its side and enjoy great games like 1942, 1943, Mercs and more in the most authentic way possible. There are 21 games that are best played in TATE mode across Evercade!

Each Evercade EXP comes with the IREM Arcade 1 Cartridge collection to start your Evercade cartridge library. With 6 great arcade originals like R-Type, In The Hunt and Moon Patrol, you can get into classic arcade gaming straight away. This comes in a numbered box and includes the game cartridge and a full colour manual.

In addition to that, each Evercade EXP also comes with bonus content built into the device. 18 Capcom games are included without the need for installation, code redemption or cartridge! 14 arcade greats and 4 home console classics can now go with you anywhere you want to go! A full colour manual is also included for the Capcom collections.

The full games list included with the Evercade EXP is below:

Plus: Compatibility with all 36 previous Evercade cartridges, featuring nearly 400 games.