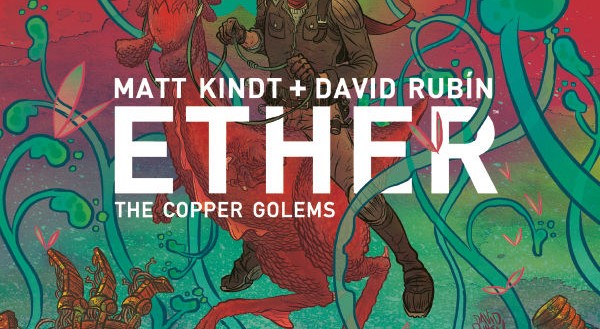 Summary: Ether is back with a thrilling new story arc!

The wonderful, wild and downright kooky world of Ether is back with a second swashbuckling fantasy adventure! The balance between Earth and the Ether has been breached and it’s up to Boone Dias to stop both worlds from plummeting into a interdimensional calamity.

We begin this issue in Venice, where we see a downtrodden and dishevelled-looking Boone being bailed out of prison. The bailers, the mysterious agency that funds Boone’s expeditions, requests that he enters the Ether again as copper golems have been punching holes through dimensions into Earth, resulting in dangerous breaches in reality…not good! In order to close the breaches, Boone sets out to the Ether to recruit a powerful and unstoppable team of mystics and magic users. Once reunited with Glum, the ever-entertaining smart aleck gorilla, Boone sets out to wrangle together his magic squad. First step is finding the strongest spell-writer the Ether has to offer, and he just so happens to know who is perfect for the job. The question is, are they willing to help?

Oh my, yes! It’s just wonderful to delve once again into this mad and eccentric world. I absolutely love the sense of adventure that is builds in this opening issue, immediately hurtling us back into the excitement and mystery of the Ether. One of the most compelling aspects of this story is Boone himself. Matt Kindt has crafted a complex and interesting character, who often has polarising aspects to his personality. I find him to be a broken and somewhat defeated man on Earth, which is reinforced by the selfish abandonment of his young family. It’s actually quite heartbreaking to see some of these emotional moments unfold, but they have been handled in a subtle and delicate way by Kindt. This then contrasts dramatically to the Boone we see in the Ether, who is a self-assured, rambunctious and at times arrogant individual. He’s good at what he does and he knows it, and I really get the sense that he is in his element in the Ether.

I also really enjoyed how this issue set itself up to have a heist-like vibe. It was fun and brought a new dynamic to the story. We are introduced to an interesting new character, a spell-hacking minotaur who rides a psychedelic motorcycle. This whacky ensemble brings in some wonderful comic relief that offsets the darker elements of the story. The banter between these characters alone is brilliant, and I really applaud Kindt’s effortless quips and sarcastic chitchat. I’m looking forward to seeing more of the adventures this ragtag group will get up to in the future.

David Rubin’s art is wonderfully diverse and always fun. This issue bursts with a variety of quirky and weird concepts and designs, all that deliver an absolute visual feast. There is a cascade of emotions running high in this issue, and Rubin nails it. There is a beautiful and sad exchange that we see between Hazel and Boone, which I found to be the most powerful scene in this issue due to the layout and composition. It was during this moment that you could fully grasp Boone and Hazel’s isolation from one another and really get a sense of the impact his choices have had on them both. I also love the actual process of Boone entering the Ether, finding it to be a hectic array of overlayed images that gives quite an effective psychedelic effect. Rubin’s colouring is beautiful and vibrant and just a riot of colour on every page.

Overall, I found this issue to be an exciting introduction to the new story arc. I’m thrilled to have this series back and cannot wait until the next issue comes out, so I can delve once again into this mad, mad world. 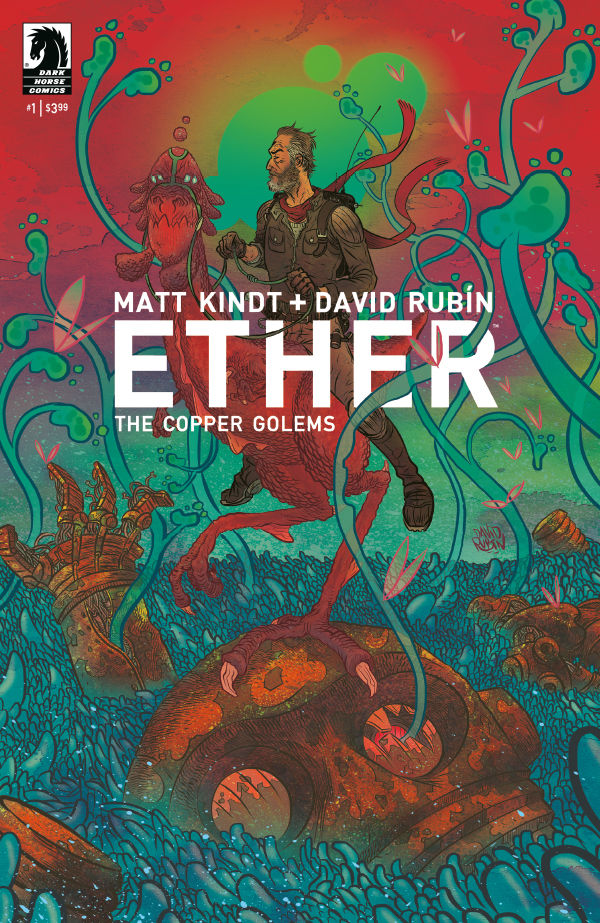