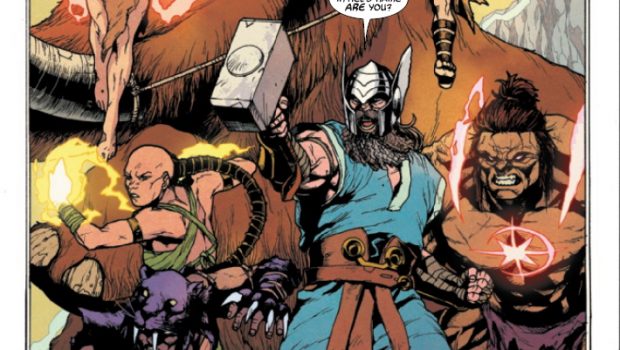 Summary: In general the Celestials are leaving me cold but the Avengers of BCE 1,000,000 make an appearance in this one. Should warm up as it goes along.

Two of the eternals Ajak and Makkari are discussing their many years of being the guardians of planet earth and their Gods abandoning them. As it turns out the earth is a plague planet and they were left there to keep watch on it. There is a run-in with the Avengers of 1,000,000 BCE that one of them comes off second best with.

The two eternals go on a journey to find the body of one of their gods, only to find it being used as Avengers Mountain. Makkari is enraged but the Ghost Rider says the gods had allowed them to do it. There is almost another fight but Ajak zaps them away.

This is another story that seems to be going along with the new Eternals movie but I am not sure what it has to do with it. Mainly seems to be the set up for a wider story. Not sure how they are going to go with the Eternals series or movie since the characters while they are not technically immortal, every time they die they get “rebooted” so there is no real stakes even in the Marvel universe where death is not a constant in general.

I would recommend this one if you are a fan of the Eternals and hopefully more of the Avengers make an appearance in future entries.