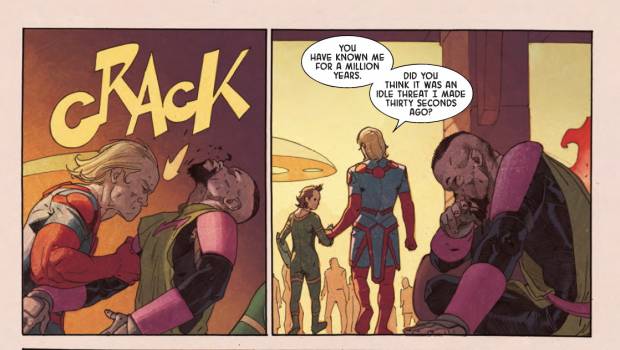 Summary: The beginning of a new Marvel storyline that is featuring in the new movies, maybe not for the more casual fan but still interesting.

Here begins the story of the Eternals or here is where it begins again as the Eternals and the Deviants have been fighting each other across the cosmos for thousands of years. They are not gods, but are often mistaken as such by the people living on Earth. Even Iron Man seems to be surprised to see them when they turn up.

This is meant to be the start of the new storyline involving the Eternals that will also be featured in the new round of Marvel movies. They are a bit more esoteric than the other superheros so it was wise to wait a decade or so to introduce them.

In this particular story there is a lot of exposition explaining the rules of the Eternals and who are the main players. Death and rebirth seem to be common themes and there is a lot more jumping around between worlds and dimensions. Even time seems to be more fluid in this story and people and events long passed have a habit of showing up.

While this is the beginning of the story it feels like it is going to need a bit of time to warm up and the action is going to start happening later down the track. There is some action in this one but they seem to want to focus on explaining on what is going on

I would recommend this to the more hard core fans of Marvel or someone who wants a different type of story than the normal superheroes. They are specifically not costumed fighters and this looks like it is going to go in a different direction.